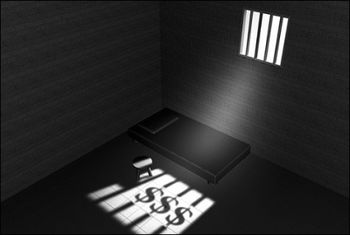 One of the most common critiques of for-profit prisons is that the industry’s goals of maximizing profits are at odds with the traditional goals of the criminal justice system, such as offender rehabilitation, reducing recidivism rates, increasing public safety, and lowering crime rates.

The GEO Group, Inc. (GEO), formerly known as Wackenhut Corrections Corporation, “is the world’s leading provider of correctional, detention, and community reentry services with 95 facilities, approximately 72,000 beds, and 18,000 employees around the globe,” says the corporate website. It is the second-largest for-profit prison operator in the United States, behind Corrections Corporation of America (CCA). The company was founded in 1984 and is headquartered in Boca Raton, Florida.

Since its founding nearly 30 years ago, GEO Group has profited from federal and state policies that have led to a dramatic rise in incarceration and detention in the United States — an increase of more than 500 percent over the past thirty years. As of 2011, around half of all prisoners in state facilities were there for nonviolent crimes, and half of inmates in federal prisons were serving time for drug offenses.

Studies have shown that for many offenses, incarceration has little if any impact on public safety, and that time in prison actually increases a person’s likelihood of committing more crimes.

According to the Justice Policy Institute: “While private prison companies may try to present themselves as just meeting existing ‘demand’ for prison beds and responding to current ‘market’ conditions, in fact they have worked hard over the past decade to create markets for their product.”

Although it claims that it has not lobbied for bills that extend or increase sentences for prisoners, for many years GEO Group participated in the task force of the American Legislative Exchange Council (ALEC) that pushed bills that lengthened time in prison, such as so-called “truth-in-sentencing” and “three strikes” legislation, as models for states to adopt across the nation.

There is no doubt that GEO is raking in the big bucks for its executives. According to SEC filings, from 2008-2012 CEO George C. Zoley’s compensation was an eye-popping $22,315,704, almost all this garnered from U.S. taxpayers.

But what are the for-profit prisons delivering for these big bucks? GEO’s cost-cutting measures have been criticized for their relationship to inmate-on-inmate and guard-on-inmate (and vice-versa) violence which are many times a result of inadequate training, low pay, and high turnover of corrections staff as well as chronic understaffing. Further allegations of civil rights abuses and medical neglect have resulted in individual and class-action lawsuits brought against the company. For example, a spreadsheet of lawsuits complied by Private Corrections Working Group/Private Corrections Institute lists hundreds of lawsuits filed against GEO Group, many of which were settled before trial. The suits range from allegation of inmate death and abuse, excessive force, medical neglect as well as allegations of employment discrimination.

When comparing for-profit prisons with public, a nationwide study found that assaults on guards by inmates were 49 percent more frequent in private prisons than in government-run prisons. The same study revealed that assaults on fellow inmates were 65 percent more frequent in for-profit/private prisons. Another study concluded that, “Privately operated prisons appear to have systemic problems in maintaining secure facilities” concluding that for-profit/private prisons have significantly more escapes, homicides, assaults, and drug abuse compared to government-run prisons.

Many of these problems can be attributed to high employee turnover, inadequate training for officers, under-staffing, and miserable conditions experienced by the inmate population.

The supposed “cost savings” of for-profit prisons can result in inadequate medical care, abuse, and other civil rights violations against the persons incarcerated in these facilities. According to In the Public Interest, a comprehensive resource center on privatization and responsible contracting: “Incarceration for profit has caused many problems, as private companies fail to make decisions in the best interest of the inmates or the communities in which the prisons are located. Private prison companies have employed unqualified guards, resorted to excessive violence and cruelty to control inmates, and provided substandard medical care, resulting in unnecessary deaths. Prison privatization has led to numerous lawsuits and litigation, fines, and increased need for federal oversight, at great cost to taxpayers, communities, inmates and their families.”

Below are just a few examples of lawsuits or other allegations asserting prisoner abuse and sexual assault.

Additional stories of withholding medical care resulting in death, and negligently allowing violence, riots and escapes in GEO-run facilities can be found in our full GEO Group corporate profile.

ACLU Lawsuit in Mississippi Alleges “Barbaric and Horrific” Conditions – In May 2013, inmates at East Mississippi Correctional Facility (EMCF), sued the state in U.S. District Court alleging “barbaric and horrific conditions” at the facility. GEO ran the facility from 1999 to 2012, but as of September 2013 it is run by Management and Training Corporation.

The ACLU reports: “EMCF is a cesspool. Prisoners are underfed and routinely held in cells that are infested with rats and have no working toilets or lights. Although designated as a facility to care for prisoners with special needs and serious psychiatric disabilities, ECMF denies prisoners even the most rudimentary mental health care services. Many prisoners have attempted to commit suicide; some have succeeded. One prisoner is now legally blind after EMCF failed to provide his glaucoma medications and take him to a specialist, and another had part of his finger amputated after he was stabbed and developed gangrene.”

Jury Awards Over $40 Million to Family of Inmate Killed in Beating – Gregorio De La Rosa, an honorably discharged former National Guardsman, was serving a six-month sentence for drug possession at a prison in Raymondville, Texas operated by GEO Group (then known as Wackenhut). The details of the case are laid out in a damning 2009 Court of Appeals ruling that upheld most of a $40 million dollar jury verdict against the company and Warden David Forrest. See ruling here (PDF). A few days before his expected release in 2001, Gregorio was beaten to death by two other inmates using a lock tied to a sock, an incident that prompted officers and wardens to smirk and laugh, as well as allegations of a cover-up and destruction of evidence. After the Court of Appeals ruling, the case was settled for an undisclosed amount.

GEO Settles Suit with Family of a Woman who Committed Suicide after Reporting Rape – A woman committed suicide at GEO Group-Operated Val Verde County jail in Texas. Shortly before her death, the woman reported that she had been raped and assaulted by male inmates who were housed in the same cell block. She also reported being sexually humiliated by a GEO guard after reporting to the warden that guards allowed male and female inmates to have sex. The woman’s family sued The GEO Group and several of its guards (PDF). In March 2007, the company reportedly settled with the family for $200,000. Additionally, an investigation into sex abuse allegations at another GEO-run Texas prison led to the firing of a guard who was a convicted sex offender.

State of Texas Fines Company $625,000 and Terminates $12 Million Contract for Mismanagement of Jail; 12 Employees Charged with Sexual Assault – In 1999, the AP reported that the state of Texas terminated GEO Group’s (then known as Wackenhut) $12 million a year contract to run a jail in Travis County due to mismanagement that eventually led to eleven guards and one case manager being charged with sexually assaulting female inmates. Over a period of two years, the state levied $625,000 in penalties due to chronic staffing shortages at the facility. A state audit showed that the jail barely kept the minimum number of guards required in the contract.

Widespread Abuse and Sexual Assault at GEO-Operated Juvenile Prison Results in “Groundbreaking” Settlement and Consent Decree – The GEO-operated Walnut Grove Correctional Facility (WGYCF) juvenile prison in Mississippi was the subject of a legal complaint (PDF) filed by the ACLU and the Southern Poverty Law Center (SPLC) alleging that the “for-profit entities that manage WCGYF perpetuate violence and corruption.” According to the complaint, some juveniles were “kicked and punched while handcuffed, and others have been stripped naked and placed in solitary confinement for weeks;” one inmate claimed to have been “held hostage in his cell for almost 24 hours, brutally raped and physically assaulted after prison staff failed to heed his plea for protection,” according to news reports.

The settlement (PDF), which the SPLC calls “groundbreaking”, will ensure juveniles incarcerated in Mississippi will no longer be housed in the privately run prison or subjected to brutal solitary confinement. Additionally, the Mississippi Department of Corrections will be required to remove youths from the GEO-operated prison and house them at a stand-alone facility governed by juvenile justice, rather than adult, standards. The decree also categorically bars the state from subjecting juveniles to solitary confinement, which the SPLC reports is the first time a federal court has banned the practice of housing juvenile offenders in long-term isolation.

The Southern Poverty Law Center also reports: “The U.S. Department of Justice launched an investigation into the conditions at the facility in late 2010 and in March 2012 reported finding a wide array of inhumane and unconstitutional conditions at the prison. The report said the state showed ‘deliberate indifference’ in failing to protect youths from harm in seven major areas: sexual misconduct between guards and inmates; use of excessive force by guards; excessive use of chemical agents; poor use-of-force policies, reporting, training and investigations; youth-on-youth violence and sexual assault; and seriously inadequate medical and mental health care. Sexual misconduct, it said, ‘was among the worst that we have seen in any facility anywhere in the nation.'”

For a fully footnoted version of this information please see CMD’s corporate profile of GEO Group on Sourcewatch.org. Follow the conversation at #OutsourcingAmerica and @PRWatch.