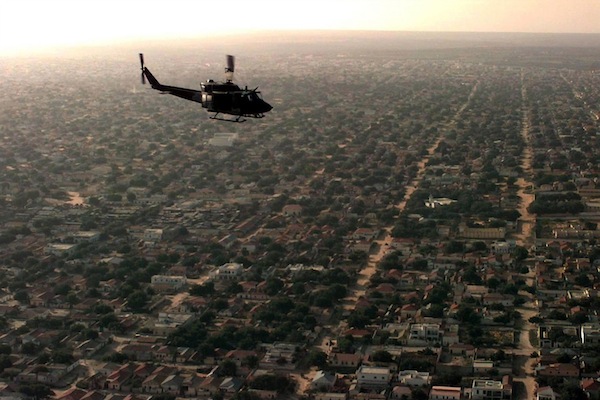 A U.S. Marine helicopter (a Huey, not a Black Hawk) over Mogadishu in 1992. Photo credit: Wiki Commons.

Last week marked the twentieth anniversary of the infamous Black Hawk Down incident where Somali militia fighters loyal to Mohammed Farah Aidid shot down two American helicopters using rocket-propelled grenades. Mobs then hacked the fallen pilots to death with machetes and dragged their mutilated bodies through the streets as trophies.

To mark the anniversary, 60 Minutes aired a segment focused on efforts by two private American security contractors to recover remnants of the helicopter that had been shot down, while interviewing retired Special Forces operative who had survived the ordeal. Like much mainstream media coverage of U.S. foreign policy, the program memorialized the deaths only of the Americans killed in the fighting. While the death of those young men was indeed tragic, what went unreported is the fact that the militia fighters who shot down the Black Hawk helicopters had been previously attacked and family members had been killed by U.S. forces.

In rescue operations, American helicopter gunners and Special Forces fired into crowds, killing and wounding hundreds of Somalis, a third of them women and children, compared to eighteen American dead. Bill Clinton commented: “When people kill us, they should be killed in greater numbers.” American military intervention in Somalia was officially designed to establish a “secure environment for the delivery of humanitarian relief” after clan warfare erupted following the overthrow of dictator Siad Barre.

Unbeknownst to most Americans, the United States had helped to create the conditions that produced unrest, flooding the country with weaponry during the Cold War along with the Soviets. In 1988, Barre’s legions leveled the northern city of Hargeisa and killed 60,000 in an effort to suppress an Isaaq clan based rebellion. The U.S. assisted Barre with intelligence and shipped 1,200 M-16 assault rifles and 2.8 million rounds of ammunition, having provided over $1 billion in aid since his ascension in 1969. Pointing to the strategic interests driving U.S. policy, General Norman Schwarzkopf noted that “The Red Sea, with the Suez Canal in the North and the Bab-el-Madeb in the South, is one of the most vital sea lines of communication and a critical shipping link between our Pacific and European allies.” ]

After Barre’s ouster, the opposition split into two factions, one led by Aidid, the former army chief of staff trained under American police programs. Africa Watch reported that the warring parties engaged in “wanton and indiscriminate attacks on civilians,” producing conditions of famine. On December 9, 1992, as the TV networks broadcast harrowing images of emaciated children, the lame-duck Bush administration launched Operation Restore Hope, in which 28,000 U.S. forces stormed Mogadishu in what Le Monde described as “the most media-saturated landing in military history.” Lives were likely saved, though food had already begun to get through by this time and relief specialist Fred Cuny noted a smaller operation in the famine triangle away from Mogadishu would have been more effective. ]

U.S.-U.N. forces were commanded by Admiral Jonathan Howe, a key figure in the capture of Manuel Noriega and William Garrison, a cigar chomping Texan with twenty-five years experience in unconventional warfare. Charging Gen. Aidid with war crimes for interfering with their mission, they bombed radio Mogadishu, possibly to prevent announcement of a peace deal between the clans. Pakistani soldiers subsequently fired on demonstrators, prompting counter-attacks by Aidid’s militias who killed 24 of them. The U.N. Security Council then authorized “all necessary measures to apprehend those responsible.”

The U.S.-U.N. placed a $25,000 bounty on Aidid’s head and engaged in manhunt operations which culminated in the Black Hawk Down incident. War crimes were committed by American, Belgian, Canadian and French forces, who tortured prisoners, raped women, destroyed cultural symbols and shot missiles into clan elder meetings, a marketplace and the main hospital in Mogadishu. Americans taking the lead in fighting operations did not know enough about Somalia to “write a high-school paper about it,” according to journalist Mark Bowden. “Their experience of battle, unlike that of any other generation of American soldiers was colored by action movies. They remarked again and again how much they felt like they were in a movie, and had to remind themselves that this horror, the blood, the death, was real.”

As political scientist David Gibbs has pointed out, American envoy Robert Oakley had close relations with the Continental Oil Company (Conoco) which provided military intelligence and helped plan the logistics for the Marine landing. Its corporate compound was transformed into a defacto U.S. embassy.

The Los Angeles Times reported that “industry sources said that the companies holding the Somali exploration rights are hoping that the Bush administration’s decision to send U.S. troops will also help protect their multimillion dollar investments there.” Early in the operation, Conoco made an agreement with Aidid that it would back him if he would grant Conoco exclusive rights to oil exploration. Aidid however did not want to barter away Somali resources, demanding large concessions, and so Conoco switched to backing rival Ali Mahdi. American foreign policy followed suit. Aidid subsequently urged his supporters to “turn against the Americans” and began waging urban guerilla warfare. Journalist Scott Peterson notes that the U.S. essentially handed Aidid the patriotic mantle of the Mad Mullah (Mohammed Abdullah Hassan), a nineteenth-century nationalist who had mobilized support against Italian and British occupiers.

The Black Hawk Down incident should provide a cautionary tale about military intervention and its often destructive consequences. Unfortunately, the public remains misinformed about U.S. foreign policy, in good part because they rely for information on TV shows like 60 Minutes which fail to dig beneath the surface to uncover the hidden motives driving U.S. intervention or analyze its effect on the subject population.

(Jeremy Kuzmarov is J.P. Walker assistant professor of history at the University of Tulsa and author of Modernizing Repression: Police Training and Nation Building in the American Century (Massachusetts, 2012.)

Media Manipulation and the Indonesian Killings of 1965-66 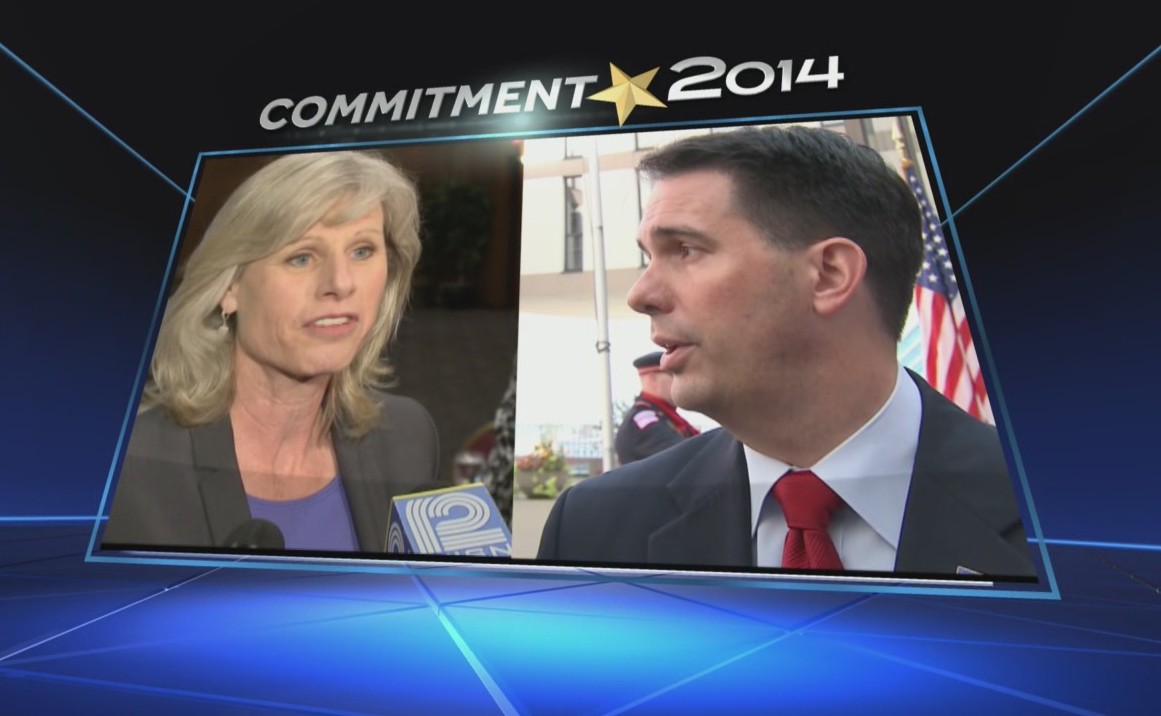 DVD Review: The Reich Underground (re the Nazi Tunnel Systems and Subterranean Factories)