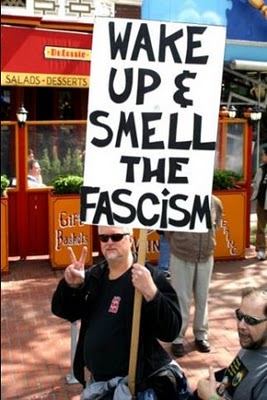 McCain, Obama, Hillary and the neofascist media
by Freedom Writer
(Libertarian)
Saturday, May 10, 2008

In 1944, Vice President Henry Wallace received a request from The New York Times to write a piece answering the following questions:

What is a fascist?
How many fascists have we?
How dangerous are they?

The following are excerpts from Henry Wallace:

“A fascist is one whose lust for money or power is combined with such an intensity of intolerance toward those of other races, parties, classes, religions, cultures, regions or nations as to make him ruthless in his use of deceit or violence to attain his ends. The supreme god of a fascist, to which his ends are directed, may be money or power; may be a race or a class; may be a military, clique or an economic group; or may be a culture, religion, or a political party.”

“The dangerous American fascist is the man who wants to do in the United States in an American way what Hitler did in Germany in a Prussian way. The American fascist would prefer not to use violence. His method is to poison the channels of public information. With a fascist the problem is never how best to present the truth to the public but how best to use the news to deceive the public into giving the fascist and his group more money or more power.”

“If we define an American fascist as one who in case of conflict puts money and power ahead of human beings, then there are undoubtedly several million fascists in the United States. There are probably several hundred thousand if we narrow the definition to include only those who in their search for money and power are ruthless and deceitful.”

“American fascism will not be really dangerous until there is a purposeful coalition among the cartelists, the deliberate poisoners of public information…”

“Still another danger is represented by those who, paying lip service to democracy and the common welfare, in their insatiable greed for money and the power which money gives, do not hesitate surreptitiously to evade the laws designed to safeguard the public from monopolistic extortion.”

“The symptoms of fascist thinking are colored by environment and adapted to immediate circumstances. But always and everywhere they can be identified by their appeal to prejudice and by the desire to play upon the fears and vanities of different groups in order to gain power.”

“The American fascists are most easily recognized by their deliberate perversion of truth and fact. Their newspapers and propaganda carefully cultivate every fissure of disunity, every crack in the common front against fascism. They use every opportunity to impugn democracy…They claim to be super-patriots, but they would destroy every liberty guaranteed by the Constitution. They demand free enterprise, but are the spokesmen for monopoly and vested interest. Their final objective toward which all their deceit is directed is to capture political power so that, using the power of the state and the power of the market simultaneously, they may keep the common man in eternal subjection.”

“Several leaders of industry in this country who have gained a new vision of the meaning of opportunity through co-operation with government have warned the public openly that there are some selfish groups in industry who are willing to jeopardize the structure of American liberty to gain some temporary advantage. We all know the part that the cartels played in bringing Hitler to power, and the rule the giant German trusts have played in Nazi conquests. Monopolists who fear competition and who distrust democracy because it stands for equal opportunity would like to secure their position against small and energetic enterprise. In an effort to eliminate the possibility of any rival growing up, some monopolists would sacrifice democracy itself.”

“It has been claimed at times that our modern age of technology facilitates dictatorship. What we must understand is that the industries, processes, and inventions created by modern science can be used either to subjugate or liberate. The choice is up to us. The myth of fascist efficiency has deluded many people. It was Mussolini’s vaunted claim that he ‘made the trains run on time.’ In the end, however, he brought to the Italian people impoverishment and defeat. It was Hitler’s claim that he eliminated all unemployment in Germany. Neither is there unemployment in a prison camp.”

“Democracy to crush fascism internally must demonstrate its capacity to ‘make the trains run on time.’ It must develop the ability to keep people fully employed and at the same time balance the budget. It must put human beings first and dollars second. It must appeal to reason and decency and not to violence and deceit. We must not tolerate oppressive government or industrial oligarchy in the form of monopolies and cartels.”

“The worldwide, age long struggle between fascism and democracy will not stop… Democracy can win the peace only if it does two things:

“Speeds up the rate of political and economic inventions so that both production and, especially, distribution can match in their power and practical effect on the daily life of the common man the immense and growing volume of scientific research, mechanical invention and management technique.

“Vivifies with the greatest intensity the spiritual processes which are both the foundation and the very essence of democracy.

“The moral and spiritual aspects of both personal and international relationships have a practical bearing which so-called practical men deny.

“This dullness of vision regarding the importance of the general welfare to the individual is the measure of the failure of our schools and churches to teach the spiritual significance of genuine democracy. Until democracy in effective enthusiastic action fills the vacuum created by the power of modern inventions, we may expect the fascists to increase in power…both in the United States and in the world.”

As I read this article written 64 years ago, I was struck by the timelessness of the struggle between freedom (democracy) and bondage (fascism). I won’t add much commentary, other than it doesn’t take a genius to put 2 and 2 together… Just look at the current choices for President (Hillary, Obama, and McCain) and the coverage they receive from the neofascist media. It is scary to think what any of those 3 candidates would do if they were elected to the Presidency.

The media’s suppression of Ron Paul (the only candidate that stands for democracy, freedom, and the constitution) by the neofascist media is so obvious that you would have to be deaf and blind not to hear it or see it…
•••••••
Reference:

The Danger of American Fascism, Henry A. Wallace

Previous Article
Fairfax County, VA: SAIC Congressional Candidate and Co-Worker Accused of Violating Election Laws
Next Article
Book Review – Nixonland: The Rise of a President and the Fracturing of America

Book Review – Nixonland: The Rise of a President and the Fracturing of America
Jun 01