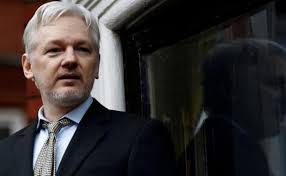 In a joint letter, The New York Times, the Guardian, Le Monde, El Pais and DER SPIEGEL said the indictment of Assange under the Espionage Act of 1917 was a threat to journalism.

“This indictment sets a dangerous precedent, and threatens to undermine America’s First Amendment and the freedom of the press,” the letter states.

Wikileaks, founded in 2006, serves as a public repository of leaked records ranging from diplomatic cables and former Secretary of State Hillary Clinton’s emails to internal documents from Amazon and secret Vatican records.

Wikileaks first drew the attention of the American public — and the government — in 2010 when it published U.S. military files leaked by Bradley Manning. Those files included footage showing a U.S. helicopter attack on a group of men in Iraq that included two Reuters journalists.

“The Obama-Biden Administration, in office during the Wikileaks publication in 2010, refrained from indicting Assange, explaining that they would have had to indict journalists from major news outlets too,” the letter states.

Later that year, Sweden issued an arrest warrant for Assange based on allegations of sexual misconduct; however, Assange has always maintained that those allegations were merely a pretext to have him extradited to the U.S. as punishment for publishing U.S. military secrets. Sweden dropped its investigation in 2019.

In 2016, Wikileaks again drew massive international attention when it released emails obtained from Democratic presidential candidate Hillary Clinton. The emails, which had been processed through her private server, embarrassed the Clinton campaign and provided much fodder for then-candidate Donald Trump.

While President Trump was in office, Assange was charged under the Espionage Act. He is currently in a British prison as he fights further attempts to have him extradited to the U.S.

The news organizations now calling on the U.S. to end the prosecution of Assange have benefited from his journalism in the past. In 2010, for example, the New York Times partnered with him to publish leaked military cables in a series of stories dubbed CableGate.

But the organizations also see Assange’s treatment as symbolic of the U.S. attitude towards publishing government secrets, like the Pentagon Papers or the classified secrets about America’s mass surveillance shared by whistleblower Edward Snowden.

“Obtaining and disclosing sensitive information when necessary in the public interest is a core part of the daily work of journalists,” the letter states. “If that work is criminalised, our public discourse and our democracies are made significantly weaker.”