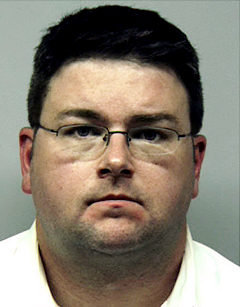 Susan Gaudet told the Daily News her younger brother, busted Thursday on sex assault charges, abused two of his relatives in the 1980s.

“I’d like to see them put him away for the rest of his life,” fumed Gaudet, one of Leaf’s three sisters, from Jacksonville, N.C. “I am so full of rage. If I had the opportunity to spit in his face and hurt him, I would do it.”

Leaf, 40, was charged this week with molesting a 4-year-old girl inside his Wyckoff, N.J., home. The married father of two is being held at Bergen County Jail on $250,000 bail.

It was 25 years ago when Gaudet found out Leaf abused two young female relatives multiple times at their grandparents’ home in Trucksville, Pa.

The abuse started when Leaf was just 9 years old and his first victim was 3, Gaudet said.

Over the next six years, Leaf repeatedly molested the girl and her sister, who is two years younger, said Gaudet, 53.

Leaf was eventually confronted, and he immediately confessed to the sordid acts, Gaudet said.

“He said, ‘Mom, I did it,'” Gaudet recalled. “Just like that. And he’s never denied it. He probably wanted help, but he never got it.” Leaf was never prosecuted, Gaudet said. The incident divided the family, but Leaf’s sister started talking to him again in recent years.

She remained concerned that he might molest another young girl.

“He continually reassured me we had nothing to worry about,” said Gaudet, a mother of two. “I kind of resolved myself to the fact that this was something in the past, but now we know it wasn’t.”

Gaudet said she revealed her brother’s dark past to his wife, Monika, for the first time on Friday. The couple has a 7-year-old son and a 4-year-old daughter.