"'When a dominant provider of information -- I mean Fox particularly -- acts not as news but as propaganda for extremists, aberrations like the Tea Party thrive,' Carey said ... " 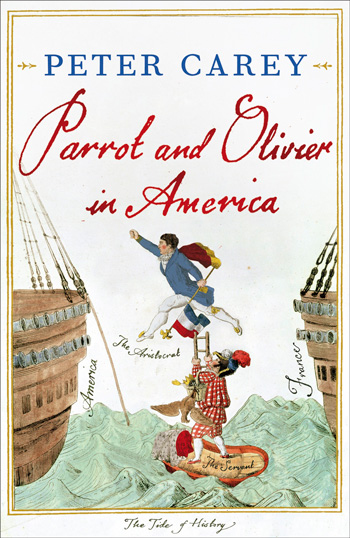 NEW YORK (Reuters) - Novelist Peter Carey warns against the demise of American democracy and culture in his latest book, targeting what he sees as factors that have led to rise of the conservative Tea Party movement.

Parrot and Olivier in America is a fictional re-imagining of Alexis de Tocqueville's journey to America in the early 1800s, during which the French political thinker examined the roots of America's democracy. It is the first book about the United States by Carey, the Australian-born two-time Booker Prize winner.

Carey, who has lived in New York for about 20 years, explores Tocqueville's speculation that U.S. democracy could be at future risk of tyrannical rule -- and the coarsening of culture that would accompany it.

"Everybody knows that Tocqueville was concerned and worried and that he feared the tyranny of the majority," Carey said in an interview in New York. "The other thing he talks about is culture, about the great dumbing-down of our culture."

Carey, who is the executive director of the Master of Fine Arts in Creative Writing program at Hunter College in New York, gripes that while people may have been awarded college degrees, they are not sufficiently educated and that a general lack of reading has contributed to a loss of thinking.

He is also unsparing about growing wealth inequality in the country, and that the failure of U.S. mass media to be objective has led to the rise of the Tea Party, the conservative movement that losing Republican vice presidential nominee Sarah Palin has aligned herself with.

"When a dominant provider of information -- I mean Fox particularly -- acts not as news but as propaganda for extremists, aberrations like the Tea Party thrive," Carey said, referring to Fox News channel, part of Rupert Murdoch-controlled company News Corp.

A Fox News spokeswoman did not immediately return a call seeking comment.

Carey said: "As democracy betrays its people, disguising propaganda as news, making education the prerogative of an elite, creating bigger and bigger inequalities of wealth, it betrays the people, who become frightened and angry."

As an example of cultural demise, the 66-year-old writer cites a rise of vapid entertainment on television.

"It's not to do with technology, we have just accepted that people can't read," he said. "Something you get from reading words and ways of thinking and argument and connection that you are not going to get from watching an entertainment grab on television."

Positive U.S. critical reaction to the book included the Los Angeles Times, which said "Carey braids his story carefully, lovingly." Salon.com called it "a great novel" whose characters "you can't bear to part with."

Carey, who counts fellow high-profile authors like Don DeLillo and Paul Auster as his friends, said reading Tocqueville's Democracy in America -- a common U.S. college text -- inspired him to write the new book.

"I knew I could write about New York City in the period," he said. "I wasn't worried at all. What I was worried about was the French part of it. I don't speak French, not a word of it."