Book Review - Nixonland: The Rise of a President and the Fracturing of America - The Constantine Report
0 SHARES

American Terrorism » Book Review - Nixonland: The Rise of a President and the Fracturing of America

Book Review - Nixonland: The Rise of a President and the Fracturing of America 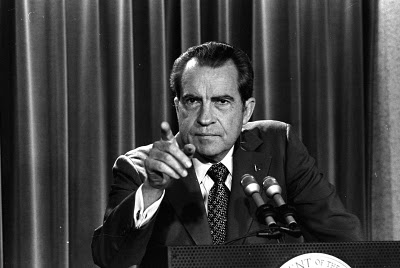 All is Toxic in this Man's 'Nixonland'

Special to The Oregonian

At the 1972 Republican Convention in Miami Beach, Fla., Ron Kovic, a paralyzed Vietnam veteran in a wheelchair, challenged delegates on the convention floor to end a war he deemed immoral. As Kovic described lying in his own excrement for hours in a VA hospital while waiting for assistance, they looked away. "The man who will accept this nomination tonight," he shouted, "is a liar."

Rick Perlstein agrees. A journalist whose essays have appeared in The Nation and The New Republic, Perlstein is a card-carrying Nixon-hater. In "Nixonland: The Rise of a President and the Fracturing of America," a sequel of sorts to "Before the Storm: Barry Goldwater and the Unmaking of the American Consensus," he provides a densely packed, dramatic political history of the United States, from Watts to Watergate, with the 37th president as the engine driving the narrative -- and the nation -- from consensus to cacophony. In pursuit of power, Perlstein proclaims, Nixon would "lie about anything," including his tendency to take a nap in the White House almost every day. In the 1960s and '70s, Nixon exploited the anger and anxiety of "the silent majority." His legacies, according to Perlstein, were culture wars, racial strife, class hatred and the toxic politics of polarization.

Perlstein has no difficulty documenting Nixon's virtually limitless "ideological flexibility." Political expediency -- and not principle -- dictated his positions on civil rights, law and order, labor unions, wage and price controls, and environmental protection. He used the Internal Revenue Service to punish political opponents. And he lied about "dirty tricks," the Watergate break-in and the subsequent cover-up.

As a candidate for president in 1968, Perlstein reminds us, Nixon crafted carefully canted phrases about Vietnam, "signifying nothing" -- and then sabotaged peace negotiations by promising the South Vietnamese he would give them a better deal. As president, Nixon devised "the most politically useful lies for any given interval." He insisted (in public) on nothing short of victory, questioned the patriotism of anti-war protestors, and stepped up military pressure, with an "incursion" into Cambodia, even as he prepared, after he was re-elected, to announce "peace with honor" and let South Vietnam "evaporate." By January of 1974, Nixon and Secretary of State Henry Kissinger (whose German accent Perlstein mocks) assured one another that "no one will give a damn."

The "search for the real Nixon," historian William Appleman Williams once observed, "is a shell game without a pea." Perhaps. Perlstein's noxious Nixon is "real" enough. But something is missing. From the grave, "Tricky Dick" might well ask, as Ronald Reagan did in Kings Row, "Where's the rest of me?" Absent from "Nixonland," for example, is the architect of a coherent (and relatively consistent) balance of power Cold War foreign policy, who went to China and negotiated arms control agreements with the Soviet Union.

Something's missing as well from the account of the "the rise of two American identities." By turns condescending to and contemptuous of the "Lawrence Welkish mass" that identified with Nixon, Perlstein ignores the role of ideas -- and the failures of liberalism -- in the electoral successes of "the party of Reader's Digest." And he exaggerates the extent to which the parties became divided into two distinct classes: the Republican Middle Americans, who resented the "snobby, opinion-making elites," and the cosmopolitan-professional-intellectual Democrats.

Perlstein may or may not be right that in the 1960s "two separate and irreconcilable sets of apocalyptic fears" co-existed in the minds of two separate and irreconcilable sets of Americans. But he's wrong to conclude that we still live in Nixonland. As John McCain and Barack Obama compete for the presidency, it seems perverse to claim that lots of Americans "fantasize about killing one another, in cold blood, over political and cultural disagreements." We may be about to learn that red and blue are colors that blend -- at least, a little.

Glenn C. Altschuler is the Thomas and Dorothy Litwin Professor of American Studies at Cornell University.

Dangers of a Politicized Military

Organic Consumers Oppose Kagan for Going to Bat for Monsanto