This past year, since Fukushima, I’ve learned a lot about the nuclear power industry. Like many I was lulled over the decades since Chernobyl into thinking they might be doing it safer nowadays, purely by reason that there hadn’t been a major meltdown to point at. Well Japan’s devastation is our wake-up call. This was a General Electric manufactured reactor, of which there are more than 20 similar units operating right here, right now.

Local communities reject these ticking time bombs, reactors designed for several decades use, which are then re-licensed to operate for several more decades beyond their specifications. The motivation for this re-licensing is clearly monetary and not safety related. The plants are literally crumbling and critical cooling pipes are worn so thin as to be the width of a sheet of paper. Numerous plant failures are expected by many observers in the coming few years. But as local entities and state governments vote to stop these hazards and shut them down, the federal government claims authority over “safety” (sic) and simply ignores the demands of the people living at the grounds zero. This is a fascistic system, a private/government partnership that ignores the valid concerns of citizens to force unwanted risk onto them. Citizens are no longer empowered to accept or reject the real risks to property, life and health that they must live under. This is fascism, as it has been from the start, since 1957 anyway.

More recently, the federal Environmental Protection Agency tipped its hand last year by shutting down monitoring of radiation contamination post-Fukushima. The agency scaled back its testing of milk, air and water — and it never even bothered to test fish — so that it would only test every three months, and only at 30 sites nationwide. This clear abdication of responsibility happened as the radiation contamination to the United States was becoming more severe. Fukushima was still belching radioisotopes into the atmosphere in the Terrabecquerel range, and radiation had been detected at numerous monitoring sites. Still the EPA under Obama (care) decided to cut back its front line protection of the American public by inexplicably stopping crucial monitoring of radiation in our environment, rather than increasing it as any responsible party would need to do.

Now, as of February 2012, there is still radioactivity in the milk. The University of California Berkely Department of Nuclear Engineering has been on the case, even though the EPA itself has shown itself to be another industry lapdog.

Last year, the EPA’s RadNet monitoring site went out of its way to claim:

“These types of findings are to be expected in the coming days and are far below levels of public health concern.”

That word “concern” is what concerned the political operators at the EPA the most. They use it multiple times with one message only: don’t be concerned, there’s nothing to see here. But, that’s not actually true.

A year later, we still have cesium-134 and cesium-137 in the milk. UC Berkeley measures it at 150% of the legal level. At 4.5 picocuries per liter, the February 2012 milk samples have exceeded the EPA’s own legal threshold of 3 picocuries / liter, making the current milk radioactively contaminated by their own definition. Note also, that milk is but one transmission path for radiation to enter the body, and radiation is passed along in the air, water and food as well.

Is this information given to the public by EPA and a milk recall performed with massive testing and analysis performed to safeguard the nation and its children from further exposure? Not at all. It’s a boutique internet piece of infotainment, relegated to the blogosphere. The milk you consume may contribute to killing you one day; I just thought you should know. Sorry you had to hear about it from me.

Radiation trapped within cells can cause “cellular disruption” leading to the death of the cell, or worse, to unchecked cellular reproduction: cancer. “Nuclear radiation is the most carcinogenic thing that exists, and it cannot be kept under control, as the Fukushima tragedy proved,” said the head of the Italian Association of Medical Oncology, Carmelo Iacono.

The next move, in a fascistic system, is to simply raise the acceptable level and to pretend that the powerless (that’s us) don’t have a valid concern, and so will be ignored. The nuclear apologist crowd uses this argument consistently; you see there are no long-term detrimental health effects from radiation, and if you believe otherwise you must be an ignoramus who doesn’t understand. The Japanese simply raised the acceptable radition dose to their children 20 fold in the wake of Fukushima. By the stroke of a pen, it was no longer 1mSv / year but 20 mSv/ year. Numbers are so malleable, who cares what they are, right?

My piece last year concerning the Future Children of Fukushima included research from Dr. Yuri Bandashevsky. After confronting the health devastation in the Chernobyl region, Bandashevsky rigorously measured and analyzed the children there. Measurements were performed in Becquerels of radioactivity per unit body weight of the patients. Dr. Bandashevsky came to the conclusion that, “children having 5 Bq/kg more than 80% are healthy, while having 11 Bq/kg only 35% of children are healthy.” Numbers matter.

In addition, Bandashevsky and others investigated specific diseases and congenital malformations in newborns. The researchers on the ground in the Chernobyl region challenged the models used by the IAEA to determine negative health impacts from radiation. More than 5,000 studies challenge the methodology and bias of the entrenched nuclear industry and its protectors in the book Chernobyl, Consequences of the Catastrophe for People and the Environment, (2009, New York Academy of Sciences).

Obama’s energy department has pushed for $36Bn in loan guarantees to force new nuclear timebombs onto more communities. Is this the primary motivation for the EPA to downplay the contamination from Fukushima, and to make their concern principally about people’s “concern”?

The Nuclear Regulatory Commission (NRC) has long been in bed with the industry. An Al Jazeera report, Danger Zone: Ageing Nuclear Reactors, showed an insider account of regulators simply accepting whatever the plant operators told them without the need to verify claims, because plant operators simply aren’t supposed to lie to regulators. We’ve seen regulations at the NRC repeatedly weakened and watered down upon request by plant owners, such that the public safety concern is not taken into account in any capacity. This is done behind the scenes out of sight of the public. We’ve seen evacuation zones that are completely inadequate and unrealistic, and clearly exposed as such. When Fukushima hit, the president of the United States warned Americans in Japan to evacuate to 50 miles from the plant. That number however is not what’s used here at nuclear plants. Plant’s evacuation plans are required to have a 10 mile radius, not 50. How did such a glaring oversight get past the president’s handlers?

Clearly some are living in a fictional construct about the alleged safety of nuclear plants. This fiction began when our friend the atom was sold to the nation as a cure-all. It remains strong due to the prevalance of industry propaganda and bribery of officials. It is easy to expose the fiction, but the wall of propaganda prevents a coherent message from getting through to the mass audience. Propaganda, that cornerstone of a fascistic system, is heavily in use.

It’s up to individuals to step up, tolearn what is true and what is false and pass on that information on to their circles. The bottom line is that nuclear plants are not safe and not wanted. They should be shut down, and cutting-edge renewable clean energy should be built to replace them. We need a sustainable future, not a contaminated radiation zone like Belarus or Northern Japan. 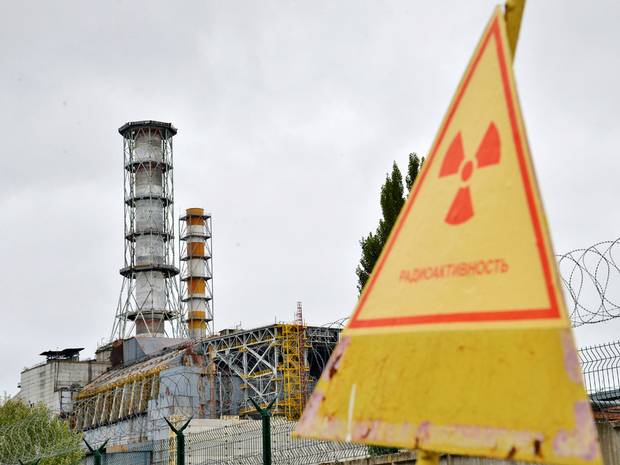 ‘Like a Science-Fiction Movie’: Chernobyl – Site of the World’s Worst Nuclear Accident Revisited