A text book written to teach German schoolchildren about Britain ahead of the Nazi invasion has come to light. 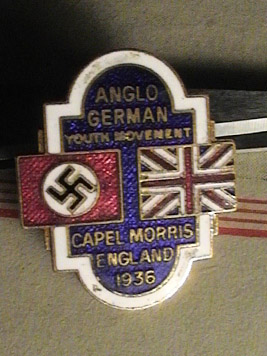 The book is mostly written in English suggesting it may have been intended to prepare future generations for rule in a Nazi government. It was published in 1942 - at the height of the German expansion across Europe.

The work portrays Adolf Hitler as a "great peacemaker" and even suggested Britain had sought an alliance with Germany. The book is decorated with a picture of Stratford-upon-Avon and attempts to give an insight into British cultural icons, including Shakespeare. Entitled 'Hirts Englandkundliches Lesebuch fur die Oberstufe an Oberschulen' ['English Textbook theory for Colleges and High Schools'], the text lavishes praise on Hitler.

One section reads: "He made before the German people and the world several offers of peace, in words which were unequivocal, emotional and idealistic. He was called a liar in the world press. He offered France friendship saying that there was no further cause of quarrel between their two peoples. The French press spat on his outstretched hand and increased their military strength."

The book makes reference to English countryside and culture, with a picture-postcard view of Stratford-upon-Avon decorating the front cover and a shot of cottage spinning in Thaxted, Essex, inside. Even Elizabeth I and Shakespeare get the Nazi treatment, with pages dedicated to the latter's role as literary and cultural icon.

One sinister chapter dedicated to foreign policy claims the British people supported fascist Germany and did not want the country defeated. It reads:

"So long as England remains faithful to the general principle of the balance of power, her interests would not be served by Germany being reduced to the rank of a weak power, as this might easily lead to a Franco-Russian predominance equally, if not more, formidable to the British Empire."

Much of the text book is taken up with a diatribe on the Jews, with chapters devoted to a twisted history of their role in Britain. It reads:

"Today in any audience in Britain, the strongest passion that can be aroused is the passion against corruption of Jewish power. The Jew himself has created anti-Semitism - created it as he has always done, by letting people see him and his methods. Even Hitler was not anti-Semitic before he saw a Jew. It was when they came out into the open when they marched to Hyde Park and tried to drag us to war with Germany when fear made them less cunning, when they revealed themselves to the British people. That was when anti-Semitism was born. When they dared to challenge fascism for the first time in their lives they found a force, a power, and a spirit in Britain which money could not buy."

Even the British newspapers were not exempt from the increasing power of the Jews, according to the text book.

"In England it is fashionable to pretend that the Jews have nothing to do with it. The Hebrew influence, however well concealed, is very strong. Papers like the 'Times' and the 'Telegraph' which represent the high financial interests are naturally dependent on the goodwill of the City. That is to say, they must give the Jews most-favoured-nation treatment. Lord Camrose, of the 'Daily Telegraph', claims to be Welsh. His origin is even more obscure than his business methods: but he is certainly connected by marriage with the Rothschild family: and his chief coadjutor, Colonel Lawson, is the descendant of Levi Lawson, later Lord Burnham, the founder of the paper. These two well-known journals depend, like all other British dailies, upon advertisements. "The continental reader may not understand to what an extent this dependency exists in England. No big paper can pay its ways on its sales receipts in Britain. The Jewish needs only threaten to withdraw his advertisements in order to cause panic in the boardroom of the paper in question."

The rare book is now being sold at Mullock's auctioneers in Ludlow, Shropshire by a private collector. The book is expected to fetch £150- £200 at the auction on April 15.

[…] One section reads: “He made before the German people & the world several offers of peace, in words which were unequivocal, emotional & idealistic. He was called a liar in the world press. He offered France friendship saying that there was no further cause of quarrel between their two peoples. The French press spat on his outstretched hand & increased their military strength.” [Read More] […]