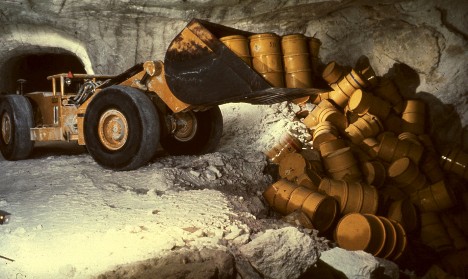 In the wake of reports that the community around the Asse atomic waste dump in Lower Saxony has suffered a rise in cancer cases, authorities insisted Friday the illnesses were not caused by nuclear contamination.

The Federal Office for Radiation Protection (BfS) was forced on Friday to issue a statement saying monitoring of the soil and crops had shown “that at the present point in time, there is no danger from the Asse (dump) either for workers or for the public.”

The news came as the upper house of parliament, or Bundesrat, signed off the ruling coalition government’s plan to extend the lifespans of Germany’s 17 nuclear power plants by an average of 12 years. It is now up to President Christian Wulff to approve the controversial law, which has triggered protests across the country.

The former government led by Social Democrat Chancellor Gerhard Schröder had set in place the phase-out of nuclear power, with all 17 plants to close by around 2022, but the new law means the last plant will not close until at least 2036.

In lengthy overnight negotiations, Chancellor Merkel also overcame objections from state leaders from her own Christian Democrats party to her planned nuclear energy tax. The conservative premiers eventually agreed to back the tax, which is expected to yield €2.3 billion a year - of which the states will get a share.

It emerged on Thursday that the number of leukaemia cases in the area surrounding the Asse dump had risen. Between 2002 and 2009, there were 18 cases of leukaemia – cancer of the blood or bone marrow – according to figures confirmed by Wolfenbüttel district authorities.

Men in the area have twice the rate of leukaemia cases as the rest of Germany. Among women, there was a tripling of the rate of thyroid cancer between 2002 and 2009.

Stefan Schostok, head of the opposition Social Democrats’ parliamentary group in the state, told daily Bild: “The numbers are a shock. The discussion about the ramshackle nuclear storage site has taken on a new dimension since Thursday.”

Stefan Wenzel, head of the environmentalist Greens’ parliamentary group, told the paper: “We have feared such a development and are calling for an honest explanation. The question is, how long has the state government known about these shocking numbers?”

But according to the “current scientific and technical readings,” there was no evidence of a connection between emissions from the operations at Asse and illnesses in the population, a BfS spokesman said. A recent analysis of ground and crop tests revealed that there was no danger in the area around Asse.

After it took charge of the Asse dump last year, the BfS established comprehensive radiation protection and monitoring measures, including underground measurements and checks to see whether there was any way for radiation to seep out.

The Asse dump near the town of Wolfenbüttel is used to store weak and medium-level radioactive waste from medicine as well as atomic power plants. Since 1978, some 126,000 barrels of the waste have been stored there.

Owing to a danger that the mine in which the barrels are stored could collapse or be flooded, the BfS is planning to remove the waste.

Meanwhile the Bundesrat effectively let the new nuclear extension law through without objection on Friday. The opposition Social Democrats plan to challenge the law in the Constitutional Court.

And nuclear energy opponents in Wendland have refused to meet with Environment Minister Norbert Röttgen during his visit next week to the controversial Gorleben nuclear dump site – which was the scene of massive protests earlier this month.

“Röttgen is coming too late,” the BI Lüchow-Dannenberg group said in a statement, adding that they saw no point in a discussion.