Analysis of: EPA Whistleblower Accuses Agency of Covering Up Effects of Dispersant in BP Oil Spill Cleanup
Published at: blog.alexanderhiggins.com 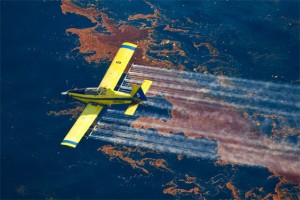 BP has poured nearly two million gallons of the dispersant known as Corexit (banned in the UK and 17 other countries) into the Gulf, and many lawmakers and advocacy groups say the Federal Government is not being candid about the lethal effects of dispersants. At a recent Senate subcommittee, Maryland Senator Barbara Mikulski grilled administrators from the EPA about Corexit and said she didn’t want dispersants to be the Agent Orange of this oil spill.

First note that it was Senators Markey, Nadler and Mikulski that made British Petroleum and the government put cameras five-thousand feet below the water to show the oil geyser volcano to the American public and the world. And when they did that, experts saw that the amount of oil being released was many orders of magnitudes greater than what BP, NOAA and the EPA were saying.

The EPA Lies Under Oath

It might come as some big shock but there is increasing evidence to show that the EPA has lied ... yet again. Without mincing words, Federal Government agencies have literally allowed tens of thousands of Americans to be poisoned during the Exxon Valdez disaster, during 9/11, and now, history is once again repeating itself in the Gulf of Mexico, except for one change: we now have a top EPA official warning us that the Government is allowing us to be poisoned.

Hugh Kaufman, a senior policy analyst at the EPA’s Office of Solid Waste and Emergency Response, a leading critic of the decision to use Corexit, and now EPA whistleblower, says that government agencies are doing inadequate and improper testing of Gulf waters.

First, remember that at Ground Zero, the EPA made statements about the safety of the air, which has since been proven to be false. Now, independent water tests in the Gulf performed by a local news station directly contradicted EPA test results. Then the director of the EPA lied under oath in a congressional hearing about water samples taken from the Dauphin Island Alabama area.

Independent water tests performed by Project Gulf Impact showed high levels of Corexit in the waters around Grand Isle, Louisiana, while EPA data showed no such contamination. Test results of all of the water samples that the EPA has done up until mid-July shows dozens of instances where the EPA is lying. In all likelihood, enough oil and toxic dispersants have been released into the Gulf of Mexico to contaminate the food chain: even NOAA has admitted that may have already happened. It's all out there, folks, you just have to go digging to get the truth, and question everything that the controlled / controlling Mainstream Media want you to believe: http://www.floridaoilspilllaw.com/dispersants-hearing-noaa-admits-gulf-seafood-not-tested-yet-says-toxins-may-bioaccumulate.

So why is the EPA lying? Answer (and I agree with the EPA whistleblower, Mr. Kaufman): to protect the profits of the largest corporations from having to pay out billions of liability claims and fines. The Federal Government says it cannot reveal such data (of the contamination) to the public because of current litigation with BP. What a load of hogwash. Who comes first, and who are we protecting here first -- the public and our children -- or BP?

Corexit -- The Neurotoxin Pesticide Dispersant -- The Cause Of Our Future Problems

Corexit, one of a number of dispersants, is four times the toxicity level of crude oil, and is used to atomize the oil and force it down the water column so that it’s invisible to the eye. The National Academy of Science has done work on it to show that Corexit is very dangerous. And toxicologists from Exxon have published on it.

A simple equation goes like this: less oil seen ... less fines to BP. In following the money trail, when you look and see who owns BP, you find that the majority ownership, a billion shares, is a company called BlackRock that was created, owned and run by Larry Fink. And Vanity Fair just recently wrote an article about Mr. Fink and his connections with Mr. Geithner, Mr. Summers and others in the Obama Administration.

When will we finally act and do something about this health disaster waiting in the wings? When tens of thousands of Gulf Coast residents end up with cancer, genetic mutations or some other mysterious unexplained illnesses (labeled in the future as "Gulf of Mexico Syndrome")?

So what else do we have?

• There is a now a massive dead-zone off the coast of Alabama.
• Geochemist expert and University of California Santa Barbara scientist, Dr. David Valentine, reports that hydrocarbon remnants are raining down near the oil disaster and are pushing onto land.
• BP is already paying-off scientists and universities (that want to join in receiving payouts), in order to keep the truth of the contamination out of the public eye.

No, I'm not some conspiracy theorist. I am fortunately just another scientist just spreading the truth, and one who does not have to rely on some crooked relationship with a lying government sponsor, and who gets to put you, the reader here, more "in the know" for your own investment and health benefit, and for the benefit of our children.