The Growth of a False Philosophy with Hitler at its Roots 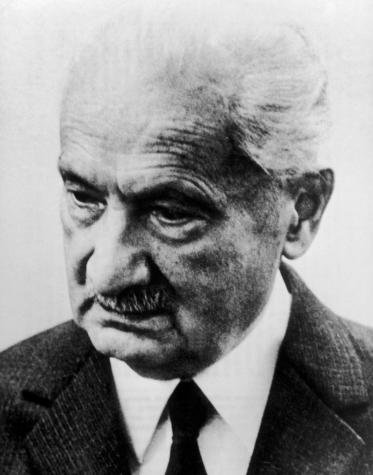 BOOK REVIEW: Heidegger: The Introduction of Nazism into Philosophy in Light of the Unpublished Seminars of 1933 – 1935, by Emmanuel Faye. Translated by Michael B. Smith and Tom Rockmore, Yale University Press, 2009, Hardcover, 436 pages, $40

Martin Heidegger: Perhaps you’ve heard of him? He died in 1976 but remains deeply controversial. Depending on your perspective, Heidegger was either the greatest philosopher of the 20th century or the greatest charlatan to ever traipse the halls of international academia. He influenced a wide range of intellectuals and artists, from existentialist philosopher Jean Paul Sartre and deconstructionist Jacques Derrida to the poet Paul Celan. Heidegger has also been excoriated as a prolix philosophaster whose massive output amounts to obscurantist nonsense. Bertrand Russell’s sweeping “History of Western Philosophy” mentions Heidegger not at all.

But there is another looming problem: Heidegger was a Nazi. According to author Emmanuel Faye, Heidegger was an early and ultimately unrepentant National Socialist, and that the relation between his opaque philosophy and sordid politics is indissoluble. Since Hitler’s downfall, the “Heidegger Debate” has raged to one degree or another. It remains critical because no “intellectual” affiliated with Nazism — other than Heidegger — is taken seriously in contemporary philosophical circles. Faye contends: “Far from enriching philosophy, he has worked to destroy it, by making it subservient to a movement that, by the murderous discrimination underlying it and the project of collective annihilation to which it leads, constitutes the radical negation of all humanity and all thought.”

Faye’s thoroughly documented book is a benchmark and profoundly disturbing: “[Heidegger] has attempted to make Hitlerism respectable, so to speak, but in using his ability to captivate and possess minds to do so. What he has spread over the entire planet is quite simply Nazism, with all its power of radical destruction of the human being.” 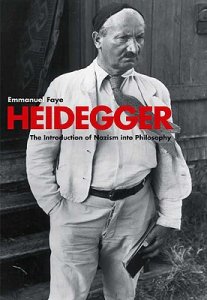 Heidegger taught that Occidental philosophy got on the wrong path long ago. He admired the Greek Pre-Socratics — those thinkers before Plato — and argued that a deeper grappling with the tenebrous dimensions of primordial existence was necessary. Ontology — the study of Being —was Heidegger’s focus. In 1927 his famous work “Being and Time” appeared. It was dedicated to his teacher Edmund Husserl, a Jew. Six years later, as rector of Freiburg University, Heidegger wasted no time making his Nazi predilection clear. Though he resigned the post in less than a year his zeal for Hitlerism was undiminished.

Faye has none of it and rips to shreds all excuses for Heidegger’s subscription to National Socialist ideology. The result is a putrid portrait of an arrogant bigot who is still revered by many around the world. Of only two photographs in Faye’s book, one is of a 1933 conference depicting Heidegger seated with other university rectors amidst swastikas and Stormtroopers. Also present is Eugene Fischer, Nazi eugenicist and director of the Institute of Berlin, where the notorious doctor of Auschwitz, Joseph Mengele, received training.

A Nazi journal from 1933 pronounced Heidegger “was at the very core of our magnificent movement … for many years he has supported in the most effective way the party of Adolf Hitler … and that no National Socialist has ever knocked at his door in vain.” As Hitler’s power became total, Nazification overtook universities. Jewish professors were removed. An unabashed proponent of “Blood and Soil” ultra-nationalism and the “Fuhrer Principle,” Heidegger endorsed this ruthlessness and habitually concluded his lectures by exclaiming “Heil Hitler!”

Heidegger participated in a book burning and gave a speech before the conflagration intoning: “Flames, announce to us, light up for us, show us the path from which there is no turning back.” Is there not something sickening about a famous “philosopher” celebrating the ceremonial destruction of books in the company of virulent fascists? Faye relates that Heidegger nurtured earnest hopes of becoming the Fuhrer’s personal guide in matters of the Hitlerian Zeitgeist.

After Germany’s downfall and until his death, Heidegger remained silent about his party membership, about promulgating National Socialism, about the horrors of the Shoah. There was no admission of wrongdoing, no public contrition. For the eminent essayist George Steiner, Heidegger’s reluctance to emit even a glimmer of genuine remorse is a transgression as unsettling as the service he gave to the Third Reich.

Faye is unequivocal. The horrific war that brought down German fascism was but one confrontation with National Socialism. Faye avers that Heidegger’s voluminous writings contain the surreptitious seeds of potential future despotisms and that his works do not belong in the philosophy sections of the world’s libraries. Catalogue them all under history and shelve them with everything else related to the wretched story of Hitler: “Today we must be aware of that enterprise, recognize it for what it is, and have the patience to analyze its monstrous character, in order to free ourselves of it definitively. To lead astray, lay waste, and radically destroy philosophy — such was Heidegger’s intent.”