The rise of Nazism to power in Germany in 1933 led to an outpouring of protest in the United States mainly initiated by Jews. Community leaders, politicians, trade unionists, writers and intellectuals, among others, took to the podiums, streets, airwaves and op-ed pages to denounce Adolf Hitler’s blatantly antisemitic regime. Strangely enough, the presidents of America’s universities and colleges remained largely silent, at least until Kristallnacht in 1938 wiped away the last doubts about Nazi goals and intentions.

This important footnote in the annals of Nazism is thoroughly explored by Stephen Norwood, a professor of history at the University of Oklahoma, in The Third Reich in the Ivory Tower: Complicity and Conflict on American Campuses, published by Cambridge University Press. It is said to be the first systematic study of its kind.

That the vast majority of American university presidents declined to take a principled position on Nazi Germany is of no small concern, since universities are usually influential in the shaping of public opinion. But for five years in the 1930s, a period of rising antisemitism and xenophobia in  North America, most of the presidents of such respected institutions as Harvard, Yale and Columbia made a conscious decision to boycott anti-Nazi demonstrations, welcome pro-Nazi dignitaries to their respective campuses and carry on with student exchanges. Even in the rare instance when they deigned to take a stand, they fell short of the mark, Norwood notes.

In July 1933, six months after Hitler was appointed Germany’s chancellor, the presidents of major universities signed a statement circulated by the National Conference of Christians and Jews. The document, addressed to German university presidents, was flawed. While it asked them to recognize and respect the rights of Jews, it did not characterize Nazi persecution as unique and noted that “minorities are suppressed and discriminated against to some degree in every land.”

The signatories, which included Rowland Angell of Yale University, Ernest Hopkins of Dartmouth College and Ray Lyman Wilbur of Stanford University, had a point.

Like many businesses in the United States, universities and colleges had discriminatory hiring policies, generally excluding Jews from their faculties. Indeed, efforts to place dismissed Jewish professors from Germany in academic jobs in the United States invariably floundered.

This antisemitism was aided and abetted by some prominent American Jews. When the president of the University of Chicago, Robert Maynard Hutchins, approached Jewish philanthropist Albert Lasker about providing financial support for employing German Jewish scholars, Lasker expressed opposition, speciously claiming “it might lead to a development of antisemitism.”

In a revealing case study of the attitude of American university presidents toward Nazism, Norwood examines Harvard University and its president, James Bryant Conant. Conant, who probably subscribed to the snotty upper-class antisemitism of his times, warmly welcomed Nazi officials to Harvard and maintained relations with Nazified German universities.

After taking control of Germany, the Nazis suppressed real academic freedom at universities, severely limited Jewish enrolment and swiftly expelled nearly all Jews, including Albert Einstein and James Franck, from faculty positions. As well, German anthropologists and biologists contributed to the antisemitic “racial science” that the Nazis had introduced into school curricula, while law professors helped refine antisemitic legislation.

None of this seemed to bother Conant, who welcomed a high Nazi official and Harvard graduate, Ernst (Putzi) Hanfstaengl, to a commencement in 1934 and who dispatched representatives to two German universities, Heidelberg and Goettingen, during their bicentennial celebrations. In a public ceremony on campus, Harvard Law School’s dean, Roscoe Pound, personally accepted an honorary degree from Germany’s ambassador to the United States, Hans Luther. And following a trip to Germany, Pound voiced admiration for Hitler and claimed that German Jews were not being persecuted.

Norwood leaves no doubt what he thinks of Harvard’s position: “Conant’s administration was complicit in enhancing the prestige of the Hitler regime… Harvard refrained from supporting protests against fascism and sometimes suppressed them.”

The president of Columbia, Nicholas Murray Butler, the recipient of the 1931 Nobel Peace Prize, was no better. Although many Columbia students and some faculty members urged him to denounce Hitler and help German exiles, he remained mostly indifferent. No surprise here. In private, Butler was an antisemite. Under Butler, prior to World War I, Columbia was the first American institution of higher education to establish anti-Jewish quotas.

After Kristallnacht, Butler denounced antisemitism in Germany. He did not, however, join Jewish organizations calling on the United States to lift immigration quotas for Jewish refugees, or sever diplomatic and commercial relations with Germany.

Norwood accuses the University of Virginia’s Institute of Public Affairs – which he describes as America’s most prestigious national and international affairs symposium – of portraying Germany as a country with legitimate grievances and reasonable objectives. The institute, he explains, invited Nazi apologists from American academia and Germany and depicted Hitler as a saviour who had restored Germany’s honour and security.

According to Norwood, university German departments were often staffed by Nazi Germany sympathizers. One such person, Max Otto Koischwitz of Hunter College in New York City, left the United States in 1939 to live in Germany, where he served as a paid propagandist. In 1943, a District of Columbia grand jury indicted him for treason.

Norwood says that American Catholic universities were bases for pro-German and Italian fascist sentiment. As he puts it, “lecturers and symposia on German affairs (at such institutions) often [downplayed] the significance of antisemitism.”

With Kristallnacht, American universities changed course. While Norwood quickly adds that the new tone toward Nazi Germany was dictated largely by the student body, he cites a 1938 survey in which an overwhelming proportion of university students believed that “Jewish refugees should not be admitted to the United States in great numbers.” 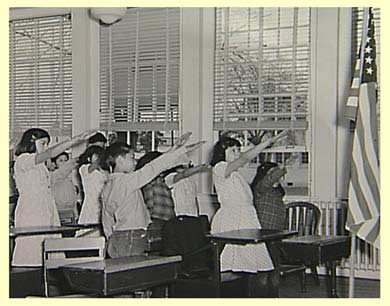