How the Journal Foreign Affairs Suppressed Information on Operation CONDOR 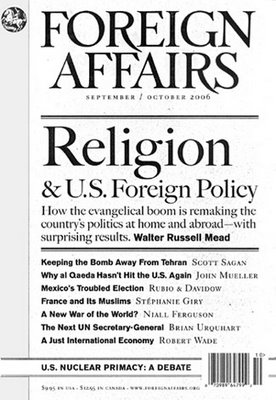 WASHINGTON, June 15 --A Princeton University expert on Latin America says he has abandoned plans to become Foreign Affairs magazine's book reviewer covering the Western Hemisphere, citing accusations that the journal bowed to pressure from Henry A. Kissinger and his associates.

The expert, Jeremy Adelman, agreed in May to take on the reviews later this month when Kenneth Maxwell leaves his post as a senior fellow at the Council on Foreign Relations, which publishes Foreign Affairs. But Mr. Adelman said that he had second thoughts after reading accounts of a dispute between Mr. Maxwell and his editors and senior officials of the council.

Mr. Maxwell resigned in protest on May 13 after reviewing ''The Pinochet File: A Declassified Dossier on Atrocity and Accountability,'' by Peter Kornbluh. His review angered Mr. Kissinger, the secretary of state when Gen. Augusto Pinochet seized power in Chile in 1973, and William Rogers, the former assistant secretary of state for Latin American Affairs under Mr. Kissinger. (Mr. Rogers is now a vice president of the consulting firm Kissinger Associates.) Mr. Rogers contended that the review exaggerated United States responsibility for the downfall of the Chilean president Salvador Allende.

Foreign Affairs then published an exchange between Mr. Rogers and Mr. Maxwell, and gave Mr. Rogers the last word in a subsequent letter. Though the journal customarily lets authors reply to criticism, it has refused to publish Mr. Maxwell's rebuttal, in what he charges is a bid to silence debate over United States policy on Mr. Kissinger's watch. Mr. Adelman said that soon after accounts of the dispute appeared in The Nation, The New York Times and the Folha de Sao Paulo, a Brazilian daily, he received numerous e-mail messages , some attacking him as ''a scab.'' His resignation was reported on Sunday in the Folha and in another Brazilian daily, O Globo.

''While I still think this is an important position and the magazine is important, the amount of time it would take for me to explain the situation to the world of Latin America experts, the world that I inhabit, was too great,'' he said. He added that the editor of Foreign Affairs, James F. Hoge Jr., was quoted in the Folha as saying that Peter G. Peterson, the council's chairman, had called to advise him that the review had upset Mr. Kissinger and others. Mr. Hoge acknowledged the call yesterday, but denied that Mr. Kissinger had pressured him. He demanded that Mr. Maxwell produce proof of his accusation. He said that he did not print Mr. Maxwell's final rebuttal because both sides had had their say.

Mr. Maxwell said that he had learned of the pressure in discussions with Mr. Hoge and had kept records of those conversations.

Theresa Cimino, an assistant to Mr. Kissinger, said he was traveling and could not be reached for comment.

Mr. Hoge said that he was surprised at Professor Adelman's resignation, and that the professor -- not Foreign Affairs -- had bowed to pressure.

Last November Foreign Affairs, the prestigious journal of the
Council on Foreign Relations, published a review of The Pinochet
File: A Declassified Dossier on Atrocity and Accountability, a new
book by Peter Kornbluh, director of the National Security Archive's
Chile Documentation Project. Written by the council's chief Latin
America expert, Kenneth Maxwell, the review upset two former
statesmen who figure prominently in the book and who also happen to
be influential actors at the council: Henry Kissinger and his
longtime associate William Rogers. In May, after an acrimonious
exchange between Rogers and Maxwell in Foreign Affairs--an exchange
that Maxwell insists was abruptly curtailed as a result of pressure
from Kissinger and Rogers--Maxwell resigned in protest from the
council. His departure raises questions about intellectual freedom
at the council; about editorial independence at Foreign Affairs,
where Maxwell spent eleven years as Western Hemisphere book
reviewer; and about Kissinger's and Rogers's influence on the
nation's pre-eminent foreign policy think tank.

Maxwell's review, "The Other 9/11: The United States and Chile,
1973," was not a slashing polemic but a measured essay on American
intervention in Chile in the 1970s. Maxwell expressed certain
reservations about The Pinochet File, yet acknowledged that Kornbluh
had assembled a dossier that "significantly amplifies" our historical
knowledge of the campaign against President Salvador Allende, who was
overthrown by a military coup on September 11, 1973. Halfway through
the essay, the reviewer directed his ire at the Nixon-era
policy-makers--Kissinger chiefly among them--who contributed to
Allende's demise: "What is truly remarkable," Maxwell noted, "is the
effort--the resources committed, the risks taken, and the
skullduggery employed--to bring a Latin American democracy down, and
the meager efforts since to build democracy back up. Left to their
own devices, the Chileans might just have found the good sense to
resolve their own deep-seated problems. Allende might have fallen by
his own weight, victim of his own incompetence, and not become a
tragic martyr to a lost cause."

Maxwell's essay prompted a smoldering letter to the editor from
Rogers, who worked under Kissinger at the State Department from 1974
to 1977 and is currently vice chair of Kissinger Associates. "The
myth that the United States toppled President Salvador Allende of
Chile in 1973 lives," Rogers proclaimed in the January/February
issue. "There is...no smoking gun. Yet the myth persists. It is
lovingly nurtured by the Latin American left and refreshed from time
to time by contributions to the literature like Peter Kornbluh's The
Pinochet File and Kenneth Maxwell's review of that book."

Allende's fall, Rogers declared, was the result of "his disastrous
economic policies, his attack on Chile's democratic institutions
[and] the wave of popular resentment that swept the Chilean military
to power." Rogers hastened to minimize US involvement in two highly
controversial matters, both of which figure prominently in The
Pinochet File: the murder of Chilean Gen. René Schneider in
1970 and Operation Condor, a state-sponsored terror network set up
by Pinochet that from 1975 to 1977 targeted critics all over the
Western Hemisphere and Europe. Among them was Orlando Letelier,
Pinochet's most prominent opponent in the United States, who was
murdered, along with American Ronni Moffitt, by a car bomb in
Washington, DC, in 1976.

Round one of the Maxwell-Rogers exchange concluded with a rejoinder
by Maxwell in the same issue. "William Rogers overreaches," Maxwell
wrote. "To claim that the United States was not actively involved in
promoting Allende's downfall in the face of overwhelming evidence to
the contrary verges on incredulity." Maxwell went on to address a
very delicate matter--Kissinger's and Rogers's knowledge of Operation
Condor. Maxwell (following Kornbluh) insisted that the murder of
Orlando Letelier, in particular, was "a tragedy that might have been
prevented," since "other assassinations of opposition figures planned
by Condor in Europe were in fact prevented because the United States
tipped off the governments in question (France and Portugal) in
advance." Closing his reply, Maxwell upped the ante: "Some
countries," he wrote, "have established 'truth commissions' to look
into such matters. In the United States, however, the record has been
extracted painfully, like rotten teeth."

Rogers returned to the battlefield with a second letter in the
March/April issue, in which he accused Maxwell of "bias," dismissed
the notion that Letelier's murder could have been prevented and
denied that he bore any responsibility for the crimes committed under
Condor. Rogers's tone suggested that Maxwell had crossed an invisible
line: "One would hope at least," Rogers ominously concluded, "that
Maxwell's views are understood to be his own and not those of the
Council on Foreign Relations, where he is a senior fellow."

On February 4, Maxwell had handed in a six-paragraph rebuttal to
Rogers's second letter--in which he wrote, "Rogers cannot forever
provide a shield for his boss to hide behind"--but it never appeared.
High-ranking sources at the council say that Kissinger and Rogers
applied enormous pressure, directly and indirectly, on Foreign
Affairs editor James Hoge--and on the council itself--to close off
the debate. Neither Rogers nor Kissinger is a stranger to the
institution: Rogers served three terms on its board of directors;
Kissinger has been affiliated off and on since 1955, and he currently
co-chairs a task force on US policy toward Europe. Maxwell notes that
the institution's new president, Richard Haass, who succeeded Leslie
Gelb in 2003, "is very much anxious to engage him." Maxwell declines
to elaborate on the specific ways Kissinger and Rogers exerted their
influence, but he does allow that "they know how to act in these
matters, and they bring heavy guns to bear."

When his internal lobbying to get his rebuttal published failed,
Maxwell felt compelled to act. On May 13 he resigned from the council
and from his post as book reviewer for Foreign Affairs. The
resignation was instantly accepted by Haass. In his resignation
letter to Hoge, Maxwell wrote, "I have no personal ax to grind in
this matter, but I do have a historian's obligation to the accuracy
of the historical record. The Council's current relationship with Mr.
Kissinger evidently comes at the cost of suppressing debate about his
actions as a public figure. This I want no part of."

Hoge denies receiving pressure from Kissinger. "I never talked to
Henry Kissinger about this at all," he says, "nor has anybody else
told me that Henry had a view one way or the other." But Hoge
certainly felt the sting of Rogers's fury. After round one of the
exchange, Hoge received a call from Rogers, who recoiled from
Maxwell's suggestion that he was directly (or indirectly)
complicitous in Operation Condor. Hoge urged Rogers to send a second
letter, and--curiously--assured him that the letter would conclude
the exchange. Hoge then contacted Maxwell. "I called Ken," Hoge
recalls, "and said, 'This is what Rogers thinks you are implying.'
And he said, 'That is what I'm implying.' And I said, 'Ken, that puts
me in an awkward position, because it's informed surmise that you are
basing this on, frankly. If there are hard facts to this, they have
yet to come out.'" Evidently Hoge does not read the books reviewed in
his own journal, because as Maxwell pointed out in the unpublished
reply, "Washington's knowledge about the Condor system and its
activities during this period has been cautiously and carefully
documented in John Dinges's book The Condor Years, especially
chapters 7-10, and in chapter 6 of Kornbluh's Pinochet File." Hoge
declined to explain why he promised Rogers--and not Maxwell, his
journal's own Latin America expert--the last word in the exchange. "A
different call might have been made," Hoge admits. (Kissinger and
Rogers did not return phone calls, and Haass was traveling and
unavailable for comment.)

Leaving the council, and vacating an endowed chair, was not an easy
decision for Maxwell, a soft-spoken, English-born, 63-year-old
historian who has taught at Yale, Princeton and Columbia and who
writes for The New York Review of Books. "The burden was on me to
make a decision on an issue of principle," he says. "That's never
easy. It's easier to acquiesce. But in this case I didn't feel like
acquiescing." On July 1 he will become a senior fellow at the David
Rockefeller Center for Latin American Studies at Harvard.

Oddly enough, Maxwell's departure coincides with the release of a
20,000-page cache of Henry Kissinger's telephone conversations from
the 1970s, some of which concern Chile. "We didn't do it," Kissinger
informed President Nixon after President Allende was overthrown by
General Pinochet. "I mean we helped them." In light of these new
transcripts, Maxwell's call for an American "truth commission" on
Chile seems more appropriate than ever. But don't expect to find the
details in the pages of Foreign Affairs.

This article can be found on the web at: