Has this Nazi Torturer FAKED His Own Death? Extraordinary Theory Emerges as Sadistic SS Doctor is Traced to Cairo Still alive? Nazi torturer Aribert Heim may have faked his own death from rectal cancer in 1992

The tall, thin, elderly German was a familiar figure on the streets of Cairo.

Every day, he could be seen walking around the city on his daily 15-mile circuit that would take him to the mosque where he had converted to Islam, followed by a visit to his favourite cafe.

The old man was a popular part of the little community that based itself around the modest hotel that became his long-term home.

To the locals, he was known as Tarek Hussein Farid, and they respected and liked him.

If his friends suspected that Tarek had a hidden past, they never inquired too deeply. Had they done so, they may have been shocked by what they found.

For if new evidence is to be believed, Tarek was, in fact, Aribert Heim — a former SS doctor who had carried out the most gruesome ‘experiments’ at Mauthausen concentration camp.

After the war, survivors recalled how the so-called ‘Doctor Death’ would inject substances such as petrol, water or poison directly into his victims’ hearts.

He would often perform operations without anaesthesia to see how much pain humans could endure, and in one notorious ‘experiment’ he castrated and decapitated a young athlete, before having the flesh boiled off his skull, to be used as a display piece.

Heim’s actions earned him a place as the most-wanted Nazi war criminal still thought to be at large. But the discovery of a battered and rusting briefcase held in storage by the Cairo hotel owner now indicates that the hunt may finally be over.

The briefcase holds a yellowing paper trail of Heim’s life. Stuffed with medical
records, bank statements and even a magazine article about the hunt for him, the documents suggest that Heim and Tarek were one and the same.

Crucially, the briefcase even contains an application for Egyptian residency, on which Tarek’s place and date of birth are identical to those of Heim— Bad Radkersburg, Austria, June 28, 1914.

The medical records show that Heim suffered from rectal cancer, which eventually killed him in 1992.

‘He must have been suffering from serious pain,’ says his son, Rüdiger Heim, who admits to having known of his father’s true location for many years.

Mr Heim says that his father’s body was buried in an anonymous common grave, although he did get a death certificate, a copy of which was recently obtained from the Egyptian authorities and shown to the world last week.

However, there are some who think that the evidence is far from conclusive. Chief among them is Dr Efraim Zuroff, the Israeli director of the Simon Wiesenthal Centre — the charitable organisation that tracks down surviving Nazi criminals.

‘We can’t sign off on a story like this because of some semi-plausible explanation,’ says Dr Zuroff, who last year travelled to Argentina and Chile in the hope of catching Heim.

‘Keep in mind that these people have a vested interest in being declared dead. It’s a perfectly crafted story. That’s the problem; it’s too perfect.’

If Dr Zuroff is right, then could Rüdiger Heim be continuing to shelter his father — now a venerable 94 — in some new location?

It sounds implausible, but it is by no means impossible. Under German law, a son cannot be forced to give evidence against this father.

Some have speculated that the story is simply a way for Rüdiger to gain control of his father’s estimated £1 million investments, which were frozen by the German authorities in the Seventies.

And there are good reasons why Heim, knowing investigators were closing in, might have conspired in a last, desperate attempt to elude them. For he may have been part of a whole network of Nazi sympathisers and survivors who have found shelter in the Middle East.

That suggestion is raised by Rüdiger’s admission that one of the reasons why he had helped protect his parent’s new identity was that he did not wish to ‘bring trouble’ for his father’s friends in Egypt.

Whatever the truth, Heim’s case draws attention to the fact that while the global hunt for Nazi war criminals focused on South America — where sympathisers are known to have sheltered men such as Josef Mengele, the ‘Angel of Death’ — many, in fact, were given sanctuary far closer to home, in the Middle East.

The truth is that countries such as Egypt and Syria welcomed perhaps hundreds of such ‘guests’ in the aftermath of World War II.

One street in post-war Damascus even featured a type of boarding house at 22 Rue George Haddat that was crammed with Germans in exile.

Among their number was Franz Stangl — the former commandant of Treblinka concentration camp, where one million Jews were murdered — who forged a new identity as a textile worker. Strangl’s wife and family subsequently joined him in the city, but they chose to flee after a local police chief made advances to their 14-year-old daughter.

Another notable Nazi who found sanctuary in Syria was Alois Brunner, who had run the Drancy internment camp near Paris, from where tens of thousands of Jews were deported to concentration camps such as Auschwitz.

In 1954, Brunner fled to Syria, where he assumed the name Georg Fischer and was
widely reputed to have worked for the Syrian government as an adviser on methods of political suppression.

Brunner was reported to have died in 1992 at the age of 80, though he was lucky to have survived that long. He was twice the victim of letter bombs, sent to him in 1961 and 1980, both of which are believed to have been dispatched by Mossad, the Israeli intelligence service. The bombs did, however, cost him an eye and several fingers.

Favourite haunt: The popular Groppi Cafe at Talat Harb Sqaure in Cairo where Heim spent time in the 1980s and early 1990s

Most controversial of all, though, are the rumours that the former Egyptian President Colonel Nasser not only offered sanctuary to Nazi war criminals, but actively employed them to help him develop arms that could be used against Israel itself.

Reputed to be among them was the celebrated SS Colonel Otto Skorzeny, who had led the daring rescue of Benito Mussolini from his mountaintop hotel prison.

In January 1953, Skorzeny was seen in Cairo inspecting a parade that was celebrating the Egyptian revolution of the previous year.

Skorzeny was rumoured to have supplied Nasser with not only arms, but also German officers who were keen to continue their war against the Jews. Could Heim have been a part of that programme?

Although he was no weapons expert, it is perfectly feasible that Nasser may have found some use for the well-educated former SS officer.

In 1955, Nasser had welcomed the odious Johann von Leers, a professor and Nazi propagandist whose speciality was penning virulently anti-Semitic tracts.

Leers — who, like Heim, converted to Islam — worked in the Egyptian Information Department and eventually became head of the anti-Israel propaganda machine.

Leers was also rumoured to have played a role in helping Nazis escape to Egypt. If this is true, then he may have even helped Heim by providing him with the necessary paperwork and employment.

So far, the Egyptian authorities have declined to discuss Heim’s life in Cairo — doubtless aware of the controversy any revelations would cause with its Israeli neighbour.

But why, in light of the wealth of fresh evidence, do some suspect that Heim may still be alive and living elsewhere?

The suspicions may, in part, be down to the sheer embarrassment of the Simon Wiesenthal organisation who have devoted years and considerable funds, without success, in the attempt to trace their most wanted man.

Just seven months ago, the Wiesenthal Centre announced fresh leads that Heim was in South America and that it could reveal his hiding place ‘within a couple of weeks’.

Such publicity was a valuable boost to the organisation’s profile in its continuing role campaigning against anti-Semitism.

Alas, it appears that its intelligence was flawed. Far from living in constant fear of detection in South America, it seems almost certain ‘Dr Death’ lived out his days in modest gentility in the Egyptian capital.

Uncomfortable though it may be to admit, especially for those who have nobly devoted their lives to tracking down the perpetrators of the Holocaust, there are many who will never be held to accountable for their despicable crimes.

Previous Article
Gerald Posner Sued for Lifting Segments of Book for ‘Miami Babylon’
Next Article
“Why I believe the king of the Nazi hunters, Simon Wiesenthal, was a fraud” 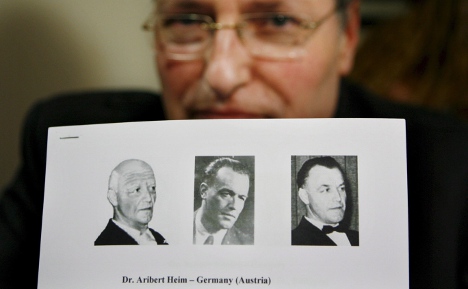 “Why I believe the king of the Nazi hunters, Simon Wiesenthal, was a fraud”
Sep 10