The Fascism Debate is Over; Fascism Won

Jonathan M. Katz is the author of Gangsters of Capitalism and The Racket on Substack.

[Related: "One Hundred Years of Fascism"] 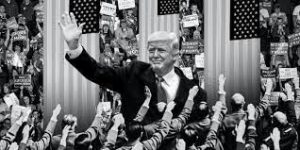 Way back in 2015, on a then-popular social media site called Facebook, I started getting into arguments with friends — mostly fellow journalists — about what to call the brand of politics a certain reality star-turned-presidential candidate was espousing.

For me, the answer was blindingly obvious, for reasons I’m tired of rehashing. If at this point you need a catalog of Donald Trump’s ultranationalism, racial chauvinism, anti-immigrant fear-mongering, sexism and misogyny, antisemitic conspiratorialism, encouragement and celebration of political street violence committed in his name, militarism, zest for war crimes, performative hostility toward the free press, cult of personality, adoption of a slogan associated for the previous 75 years with literal Nazi sympathizers, and total disdain for both free elections and all principles of liberal democracy — then congrats on your recent fourth birthday, you’re gonna love kindergarten next year.

The friends I was arguing with, mostly political reporters and editors, thought I was being absurd and alarmist. What did I think Trump was going to do if he somehow became president: try to build concentration camps? [Esquire, June 13, 2019: "An Expert on Concentration Camps Says That's Exactly What the U.S. Is Running at the Border"] These were, don’t forget, the days when newspaper editors were trying to argue that it was partisan cant to say that Trump had ever told a lie because it was impossible to know what he believed in his heart.

In the White House, as Trump tried to transform his extremist rhetoric into policy — promulgating his Muslim and transgender bans, seizing the children of immigrant families, reinstating the federal death penalty, starting his commission to “promote patriotic education” amid a nationwide spike in bans of LGBT and anti-racist books, siccing the military on civil-rights protesters, etc., etc. — the goalposts kept shifting. OK, maybe Trump’s goals are fascistic but he’s having a hard time achieving them. OK, so he clearly wants a one-party dictatorship, but we’re still having elections, aren’t we? Scholars of 20th Century fascism were trotted out to say things like: “He does not have his own obedient ‘squadristi’ eager to beat up foes.” Then Trump stood on a national debate stage and instructed the Proud Boys to “stand back and stand by.” Three months later, those cadres helped lead the storming of the United States Capitol.

For a moment I thought the fact of that event — that Trump, his personal allies, and his street-fighting followers attempted to literally, violently overturn the 2020 election, culminating in an attack that the leading scholar of European fascism, Robert O. Paxton, acknowledged closely resembled the landmark French anti-parliamentary riot of February 6, 1934 — would end the debate. Indeed, even Paxton, who had for years resisted applying the label despite the obvious applicability of his own definition to understanding how Trumpism fit on the fascist spectrum, wrote in the aftermath of the failed coup: “Trump's incitement of the invasion of the Capitol on January 6 … removes my objection to the fascist label. His open encouragement of civic violence to overturn an election crosses a red line. The label now seems not just acceptable but necessary.”

How naïve we both were. There’s nothing American journalists love more than not labeling a conservative party extreme and nothing the right loves more than hiding under a big blanket of relativism whenever it has to. And conveniently for all of them, there is nothing political historians love more than gatekeeping their personal definitions of fascism. (Renzo De Felice, the mid-20th Century Italian historian who authored a 6,000-page biography of Mussolini, famously refused to draw parallels even between the Italian Fascists and the German Nazis, saying, “I am opposed to generalizations.”) So even with an attempted overthrow of democracy on the books and Paxton’s statements in hand, there were always going to be scholars willing to raise their hands and say, aaaaah well, teeeeechnically if you look at this analysis of the Weimar Republic with one eye closed (looking at you, Corey Robin and Dan Bessner) who could be used to abruptly wave away the argument.