The Bizarre Tale of Savitri Devi, the Hindu Nazi - The Constantine Report
0 SHARES

Nazism » The Bizarre Tale of Savitri Devi, the Hindu Nazi

The Bizarre Tale of Savitri Devi, the Hindu Nazi

Savitri Devi is largely an unknown (or forgotten) figure from 20th century history; but she is well worth remembering because she lived one of the strangest, most incomprehensible lives that one could imagine. A life that defied and/or contradicted all convention and stereotypes. 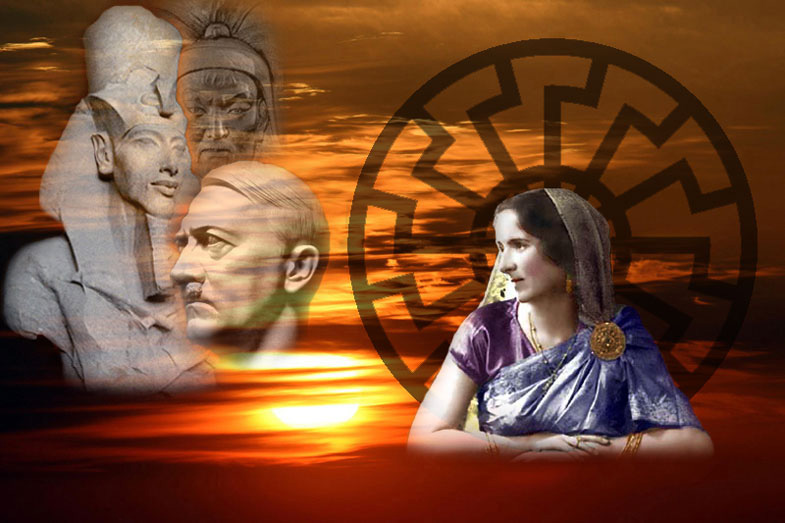 Savitri Devi was, for lack of a better description, a “Hindu Nazi.”

Her life trajectory followed a long and winding path that took her to unexpected places, to say the least. (Try to imagine a tiny female Nazi stormtrooper wearing a modest, plain Indian sari).

She was born in 1905 in Lyons, France as Maximiani Portas, the daughter of a Greek-Italian father and an English mother.

At some point in her young womanhood, Maximiani became enamored with Adolf Hitler and the German Nazi movement. Perhaps inspired by the Swastika (which was originally a Hindu symbol, but later co-opted by Hitler), she apparently sought to combine the National Socialist ideology with the ancient Hindu tales from the Bhagavad-Gita.

No doubt, Maximiani also developed a virulent strain of anti-Semitism from an early age, which dovetailed perfectly with Hitler’s fanatical hatred of the Jews.

The “link” between Nazism and Hinduism is an extremely controversial subject, but suffice it to say, Maximiani’s unlikely synthesis of these two very disparate philosophies led to her conviction that Hitler was a heaven-sent avatar, much like Vishnu, the Hindu God.

What complicates (and confounds) many people is the concept of the “Aryan” race. Hitler viewed himself (and the German people) as “pure Aryans,” the descendants of a mysterious race of “superhumans” who migrated to northern Europe from some unknown locale in Central Asia (or perhaps they moved in the reverse direction).

However, the Aryans, or rather, the Indo-Aryans, the warrior race that swept into India to subjugate the native Dravidian peoples of the Indian subcontinent thousands of years ago, likely had little connection, if any, to the peoples of northern Europe.

Historians can’t seem to agree on who the Aryans exactly were, where they lived, where they came from, or what became of them. Some scholars (particularly in India) debunk the “Aryan invasion of India” theory entirely. But it should be noted that some consider Iran and the Iranian peoples as being the “true Aryans.” Indeed, one of the Shah of Iran’s many titles was “Light of the Aryans.”

Moreover, the term “Indo-Aryan” is intimately tied to “Indo-European” (yet another controversial topic).

The very idea of an Indo-European language (and, by extension, race) was proposed after German linguists and philologists, including August Schleicher, discovered that many words in Sanskrit (the language of ancient India) were startlingly similar to words in German, English and other “western” languages.

Regardless of the tenuous link between the ancient Indians and the Germans (and the pseudo-science related to the study of the Aryans), Maximiani bought the dubious theories wholeheartedly. She viewed Hinduism and Nazism as one in the same, with no inherent contradictions.

Indeed, like Hitler (and the ancient Hindus), she espoused the beauty and values of the natural world, championing ecology, vegetarianism, animal rights and (above all) pagan mysticism.

She was highly learned – having earned two Masters Degrees and a Ph.D. in philosophy from the University of Lyon in France. In Greece, among the ancient ruins, she discovered the swastika – leading to her belief that the ancient Greeks were Aryans.

Maximiani travelled all over Europe and the Near East during her youth, including a visit to British Palestine in 1929, where she saw first-hand the conflicts between Palestinians and Jewish settlers (an experience that likely deepened her anti-Semitism).

But it was not until she went to India (which she regarded as the origin of pure Aryan civilization) in 1932 that her life changed forever.

Her immersion in Indian Hindu culture was total. She studied Bengali and Hindi at Rabindranath Tagore's prestigious Shanti Niketan school.

She changed her name to Savitri Devi (which roughly translates to "Sun goddess" in Sanskrit); and she gave her full support to the Indian Hindu nationalist/independence movement against Britain. She also advocated vehemently against both Christianity and Islam.

In 1940, living in Calcutta, she married Dr. Asit Krishna Mukherji, a Bengali Brahmin who edited the pro-German newspaper New Mercury and fully embraced National Socialism. (Although Mukherji apparently married her only to prevent her from being deported and remained chaste, Savitri reportedly was sexually-liberated, having many affairs with both men and women).

During the 1930s and 1940s, Hitler was widely admired in India – largely because he was viewed as anti-British – that is, before the full horrors of the Holocaust were revealed After World War II. Savitri’s adoration of Hitler and Nazism only increased – she continued writing essays and books; and travelled all over post-Third Reich Europe. In Germany, she was arrested and briefly imprisoned for publishing pro-Nazi leaflets.

She moved widely across Europe, Middle East, Britain and even the U.S., meeting with neo-Nazi adherents everywhere and becoming sort of a ‘grand dame’ for unrepentant Hitler-admirers. She might also have been one of the first Holocaust deniers – the belief that the Nazi’s extermination of the Jews was a lie.

She wrote many texts and books (mostly dense, wordy and incomprehensible tracts) which found an audience with Nazi sympathizers around the world after the fall of the Third Reich.

Although Savitri was clearly eccentric (and probably a crackpot) she had legions of admirers – including the Chilean diplomat Miguel Serrano, Italian far-right winger Claudio Mutti; and Revilo Oliver, a notorious American neo-Nazi, among others.

In the 1970s, she returned to India to live in New Delhi on her deceased husband’s pension. She died in 1982 in England.