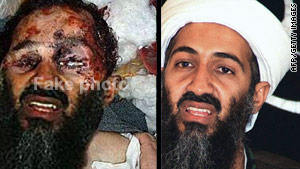 (CNN) -- A graphic image of what was reported to be Osama bin Laden's bloodied face, which went viral on the Internet and was plastered on the front page of newspapers around the world, is a fake.

The lower part of the photograph, which shows his partially opened mouth and graying beard, is almost identical to another image of bin Laden published years ago. The upper half shows his wounds in detail greater than that of the rest of the photo and there are unusual and abrupt shifts in the coloration of his skin.

A photographer consulted by CNN said the gruesome photograph is most definitely not real.

"I have seen a great number of poorly Photoshopped images in my time as a photographer and I can tell by the pixels that it is a fake," said Kenna Lindsay, a New York-based photographer who works with composite images.

The Guardian newspaper in Britain reported the picture is actually a combination of two photographs: a bloodied corpse and a real image of bin Laden that was taken in 1998 and used by the Reuters news agency.

The doctored image blanketed the Internet in the hours after bin Laden's death and was picked up by news groups far and wide, in places like Pakistan, Afghanistan, Senegal and Iraq.

Meanwhile, U.S. officials are weighing whether to release an actual image of bin Laden's corpse. A photograph could help to convince doubters about his death, but it also could inflame passions against the United States.

"I'll be candid that there are sensitivities here in terms of the appropriateness of releasing photographs of Osama bin Laden in the aftermath of this firefight," White House Press Secretary Jay Carney told reporters Tuesday. "We're making an evaluation about the need to do that."

A senior government official involved in the discussions said a photo release could come as early as Tuesday.

A second government official familiar with intelligence matters said deliberations are leaning toward a release, but emphasized that the decision "isn't unanimous and everyone has understandable hesitation."

Of course it’s fake. He died in a middle east hospital in December 2001.

[…] the added confusion about the fake photo of Bin Laden’s body floating around the internet, the conspiracy theories are all but inevitable. […]

Well…….if they’ve actually killed the real Bin Laden, then why not just release the damn photos?

Seymour Hersh on Obama, NSA and the 'Pathetic' American Media

Demanding the Evidence on Abbottabad: Even the Media Establishment Is Wary

The Bin Laden Raid: Anatomy of a Sloppy Spin Job

The Obama Backlash: Taking on the Radicals (Book Review)

PR: The Dark History of Spin and its Threat to Genuine News

Investigation of Media Fakery at the BBC

Edward Wyatt on the JFK Murder – the Next Judith Miller?