" ... The trial reflects Argentina's ongoing effort to resolve crimes of the 1976-1983 military junta, which human rights group believe killed as many as 30,000 political opponents. ... " 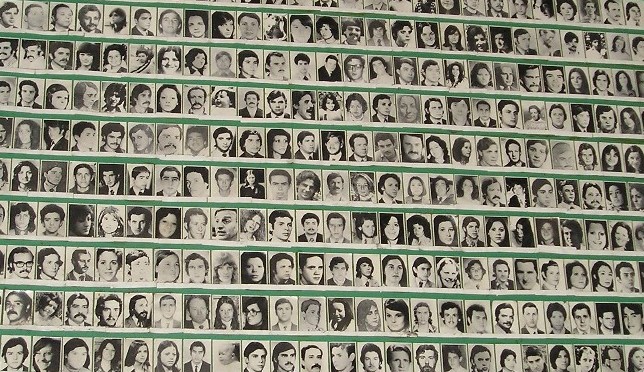 BUENOS AIRES, Argentina — From the street, it was an unremarkable auto-body shop in a busy middle-class neighborhood. Behind its metal garage door, Automotores Orletti was a tactical operations center for Operation Condor, a coordinated effort by South America's dictatorships to eliminate dissidents who sought refuge in neighboring countries.

Bound, blindfolded prisoners were scattered on the oil-stained concrete floor among disabled cars and machinery. Engines ran to mask the screams as prisoners were given electrical shocks and hoisted on pulleys, then submerged headfirst in water — torture they called "the submarine."

Sandro Soba was just 8 years old when he and his family — who sought refuge in Argentina from the Uruguayan dictatorship — were detained and taken to Orletti. Soba saw his father suffering from bruises and burns, barely able to speak or see, his eyes crusted with pus.

Soba and his mother and siblings were returned to their native Uruguay. They never saw Adalberto Soba alive again. For years, the son resisted sleep.

"I was afraid to close my eyes and forget the details of what I had seen," he told The Associated Press. "I knew I would need to tell someone one day, so I could understand where they had taken us and where I had seen my father for the last time. And so there could be justice."

Now Soba is preparing to testify at a trial that began Thursday of five former dictatorship figures accused in the illegal imprisonment and torture of 65 prisoners in the Orletti garage. The trial reflects Argentina's ongoing effort to resolve crimes of the 1976-1983 military junta, which human rights group believe killed as many as 30,000 political opponents.

Many of the prisoners who passed through Orletti in 1976 were Uruguayan, though Cubans, Argentines, Chileans and Bolivians were also there. About 10 percent of them survived, according to John Dinges, a Columbia University professor and author of The Condor Years.

Former air force Vice Commodore Nestor Guillamondegui was separated from the trial due to poor health after being charged with the murder of Carlos Santucho, whose brother, Mario, led Argentina's People's Revolutionary Army — the communist urban guerrillas responsible for kidnappings and attacks on police in the years before the dictatorship.

Cabanillas and Visuara are charged with murdering five people whose bodies were found in cement-filled drums in the Lujan River — including Marcelo Gelman, the son of Argentine Poet Juan Gelman. Juan Gelman's daughter-in-law, Maria Claudia Garcia was seven months pregnant when she was abducted with Marcelo. She was moved to Uruguay and then disappeared.

In 2000, Gelman located his granddaughter, Macarena Gelman Garcia, who was raised by a police official and his wife in Uruguay. She, too, plans to testify at the trial, which is expected to take months.

Orletti and other torture chambers were the end of the road for numerous leftists in South America in the mid-1970s, when military rulers in Argentina, Chile, Uruguay, Paraguay, Bolivia and Brazil sought to eliminate their political opponents.

"The only option was to leave the country," said Sara Mendez, an anarchist and trade unionist in Uruguay who fled to Argentina in 1973. Armed men in civilian clothing stormed her Argentine apartment in July 1976, separating her from her month-old son and taking her to Orletti. He was adopted by a member of the Argentine federal police force while she was imprisoned in Uruguay. It took 26 years before mother and son were reunited.

Documents show the United States had "general but very solid knowledge" of these crimes, said Carlos Osorio, who directs the Southern Cone Documentation Project at the National Security Archive in Washington, D.C.

A State Department cable, later declassified, reported in 1976 that 30 Uruguayans had been captured. The archive obtained dozens of Operation Condor documents through Freedom of Information lawsuits and supplied them to Argentine judges for these trials. No documents have been uncovered that show U.S. officials knew that Orletti was being used as a torture center, Osorio said.

Argentina has taken the lead among the six main Condor countries in prosecuting dictatorship-era figures, accusing 1,464 of crimes against humanity and returning 75 verdicts to date, convicting 68 and absolving 7. More than 320 cases are under way, according to the Center for Legal and Social Studies in Buenos Aires.

In 2005, Argentina repealed amnesty laws that protected military officials from these trials. Uruguayan voters have twice upheld amnesty laws. The cross-border nature of Operation Condor put some crimes beyond the scope of the amnesty law, however, and enabled convictions last year of eight former officials for the murder of 28 Uruguayan political prisoners, who came through Orletti and were never seen again.

"We're just starting to know the truth," said garage survivor Sergio Lopez Burgos, who witnessed Santucho's torture and death and plans to testify in September. "It's late, but it's important. We have to reconstruct the past ... and the memory so these things never happen again."