As the agency strives to craft a cuddly new image, we mustn't allow it to whitewash its history of torture and murder

In the latest CIA coup, America's leading spooks have sent the Twittersphere into a frenzy with their chucklesome debut on social media: "We can neither confirm nor deny that this is our first tweet." How droll! More than a quarter of a million people have retweeted what has been described as "the best first tweet possible". No wonder: it's one of the world's most secretive organisations being self-deprecating, light-hearted, even – dare I say it? – cute.

Here's a story that isn't quite so cute. My parents were among many South Yorkshire families who took in refugees fleeing Augusto Pinochet's Chile in the 1970s. Sylvia was a Chilean woman with two kids. Her husband had been murdered, she had been tortured and – traumatised – she would end her life by jumping from a Sheffield tower block.

Here was just one victim of a junta installed on 11 September 1973 with CIA support after Henry Kissinger declared: "I don't see why we need to stand by and watch a country go communist due to the irresponsibility of its people." Dissidents had electrodes attached to their genitals. Thousands were killed, including those crammed into Santiago's National Stadium; among then was Victor Jara – Latin America's answer to Bob Dylan. This was the other 9/11, and the CIA's fingerprints were all over it.

But, judging from the reaction to the new-look CIA, the punters are taking a different view. "A good example of how even the most serious of organisations can use a light touch successfully on social media,"applauded the Liberal Democrat activist Mark Pack. "The CIA have managed, with one tweet, to do what millions of PR dollars could not," suggested another Twitter user.

Of course, the CIA is far from alone in trying to lighten up its image: PR offensives are all the rage among tyrants, too. Are you a bloodstained despot who wants to polish your sullied reputation? Your first port of call is surely Bell Pottinger, run by Thatcher's publicity guru, Lord Bell. The dictatorships of Bahrain and Belarus, the Syrian dictator's wife, Pinochet himself – all have had their reputations spruced up by the firm. Its services include cleaning up those embarrassing Wikipedia articles and Google search results. Kazakhstan's pro-western dictator, Nursultan Nazarbayev – who locks up dissidents and massacres striking oil workers – is a pro at PR campaigns, hiring Tony Blair at vast expense. The Burmese junta hasn't hired Blair, but its "new Burma" rebrand is very New Labour. Equatorial Guinea's dictator ropes in Hollywood stars, pop stars and other celebs to distract from torture, arbitrary detention and execution.

The CIA might try and LOL away its record, but given the world is still dealing with the consequences of its many disastrous postwar interventions, it shouldn't be allowed to get away with it. "Terrorism" is normally used when referring to acts of violence committed by non-white people hostile to the west. But if we're understanding the term to mean acts of terror committed for political ends, then the CIA is surely the greatest terrorist organisation on earth.

Last year, days after the Assad regime's heinous gas attacks had killed hundreds, it was revealed that the CIA had helped Saddam Hussein with his own chemical weapons slaughter in 1988. Fearful of an imminent military breakthrough by Iran, the agency passed on Iranian troop positions to the Iraqi tyrant, "fully aware that Hussein's military would attack with chemical weapons, including sarin". As a former US military attache to Baghdad put it: "The Iraqis never told us that they intended to use nerve gas. They didn't have to. We already knew." 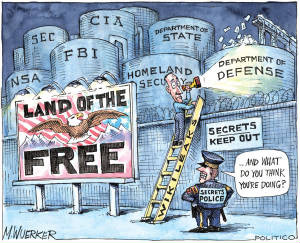 The CIA's catastrophic involvement in Iraq goes back much further. In 1963 Saddam's Ba'ath party violently deposed the leftist administration of Abd al-Karim Qasim, slaughtering thousands of communists with the help of lists provided courtesy of the CIA. "We came to power on a CIA train," boasted Al Saleh Sa'adi, the new regime's interior minister. Today, Iraq lies shattered and bloodied.

Handing out lists of dissidents to tyrants was a CIA speciality. In 1965, Indonesia was home to the world's largest non-ruling communist party. Fearful that the country was slipping into the communist axis, the CIA supplied the coup leader General Suharto and his goons with names of leftists. Up to a million were slaughtered with guns and machetes; the countryside was littered with rotting corpses, and rivers were tinged red with blood. It was "one of the worst mass murders of the 20th century", according to an internal CIA report.

Iran is possibly the definitive example of CIA operations blowing up in the face of the US. In 1953 the agency – along with Britain's MI6 –orchestrated the overthrow of the democratically elected social reformer Prime Minister Mohammad Mossadeq after he attempted to nationalise the country's oil industry. The coup "was carried out under CIA direction as an act of US foreign policy", as the CIA put it recently. Mossadeq was replaced by the repressive shah: no wonder, then, that after the overthrow of this CIA stooge the new regime was so virulently anti-western. The entire region still lives with the aftermath.

And Afghanistan still suffers the consequences of the CIA's lavish support for mujahideen fighters engaged in armed struggle with the Soviets in the 1980s.

The charge sheet is frighteningly long. The CIA's Phoenix programme in Vietnam killed tens of thousands between 1965 and 1972. CIA-backed coups in Brazil, the Dominican Republic and Bolivia; CIA-backed death squads in Guatemala, Nicaragua and El Salvador; the murder of Patrice Lumumba, Congo's first democratically elected leader, in 1961 – the tragic preamble to decades of war and dictatorship that has killed millions. Neither can all this be dismissed as the unfortunate acts of a bygone era. The CIA has questions to answer about its involvement in the abortive 2002 coup against Venezuela's Hugo Chávez.

The agency's first tweet provoked the New York Review of Books to launch a Twitter war, exposing the CIA's recent record. The CIA had interfered with a recent Senate investigation into torture, the magazine pointed out, in CIA secret prisons established by President Bush. CIA operatives were given clearance to deprive suspects of sleep, slam them against walls, and use waterboarding and other forms of torture.

It's in the CIA's interests to craft a cuddly new image: as a team of glamorous, James Bond-style spooks who can take a joke. Given the abject failure of much of the western media to scrutinise its actions – at least until it's too late – it may believe it can get away with it. But its record of torture, murder and subverting democratic governments speaks for itself. However savvy its Twitter campaign, that must not be forgotten.