Nazi Ratlines and the CIC

From a review of “The Night of Broken Glass,” a collection of Kristallnacht victim narratives compiled by Edward Hartshorne, translated by Robert Simmons and Nick Somers from “Nie Mehr Zurück in Dieses  Land,” “Never Return to this Country,” edited by sociologist Uta Gerhardt and  political historian Thomas Karlauf:

… “The Night of Broken Glass” puts human faces on hitherto inadequately named events. The narrations were originally compiled by American sociologist and heroic anti-Nazi activist Edward Hartshorne, who was murdered in postwar Germany after he discovered, to his horror, that U.S. Army counterintelligence officials were smuggling Nazi war criminals out of Soviet-occupied Austria and Eastern Europe to South America to serve as future Cold War allies.

Almost a decade earlier, Hartshorne had joined a group of Harvard sociologists who were launching a writing competition for those who had experienced Nazi persecution. The essay contest drew hundreds of entries, including a handful from enthused Nazis who misunderstood the competition’s purpose. More than 250 manuscripts arrived, most from Jews.

From these, Hartshorne edited a group dealing with November 9–10, 1938, to form “Nazi Madness: November 1938,” a book that would never be published. After sending the book to a prospective publisher in 1941, Hartshorne joined the American Secret Service and the book never saw the light of day. Gerhardt and Karlauf rediscovered Hartshorne’s typescript in 2008, in a California archive. The editors call the collection “a document of the greatest importance for modern history.” …

Details of the Hartshorne murder from a Guardian review

Eyewitness accounts of Kristallnacht collected  by an anti-Nazi hero

… [Hartshorne’s] Nazi Madness was to have been a contribution to his campaign against American isolationism. It remained unpublished because Hartshorne was drafted into government service once the US entered the war, and lacked the time to see it through the press. In 1945 he was put in charge first of re-establishing German universities, and then of denazification in Bavaria, with further heavy demands on his time.

Hartshorne’s anti-Nazi convictions aroused the hostility of the US military government’s Counter-Intelligence Corps, the CIC, which was smuggling Nazi war criminals out of Soviet-occupied Austria and eastern Europe to Italy and thence South America, to be questioned about their knowledge of the Soviets for use in the looming cold war. Informed of these activities, Hartshorne was outraged and passed on information about this “ratline” to Moscow. He had become a serious inconvenience to the CIC. On 28 August 1946, on the Munich-to-Erlangen autobahn, his car was overtaken by a Jeep, which suddenly slowed down in front of him, forcing him to overtake it in turn. As he passed, a single shot was fired from the jeep, hitting him in the head. He died two days later. The murderer was never identified. 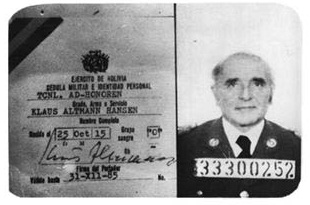 Klaus Barbie Escaped via a Ratline Disguised as a CIC officer

” … Croatian Roman Catholic priest Krunoslav Draganovic was the organizer of the Vatican Rat Lines that allowed wanted Ustasha and Nazi war criminals to escape from Europe to South America. He helped not only suspected Croatian Ustasha war criminals escape prosecution for war crimes. He organized Klaus Barbie’s escape to Bolivia as an employee of the U.S. Army Counter-Intelligence Corps (CIC) in 1951. … He was implicated in the deaths of 4,000 civilians in France during World War II. In 1987, he was tried and convicted in France of committing “crimes against humanity” and sentenced to life in prison. … “

Concerning the Nazi ratline escape routes set up every 40 miles along the German border at the end of WW II — some leading the fleeing Nazis to the Vatican, and on to Catholic South America (among other ratline terminus points around the globe, including the U.S. where some Nazi war criminals arrived disguised as priests) — that “outraged” Hartshorne:

The Pope, Eichmann and the Nazi ‘Ratlines’

Germany is fighting to keep sealed the Adolf Eichmann files detailing the years the Holocaust chief logistical organiser spent on the run before he was captured by Mossad agents.

Those hoping to have a 50-year secrecy order overturned believe the government is embarrassed by details within that may prove German and Vatican officials colluded in his escape and freedom.

Indeed, the Church’s practise of protecting its own perpetrators of vicious crimes has already been well established with the tragic revelations of thousands of victims of child sex abuse by cleric paedophiles.

For the current papacy under the German pope, Benedict XVI, the 4,500 page Eichmann dossier could be the ’smoking gun’ that would shoot down his plans to canonize Pope Pius XII (1939-58), aka ‘Hitler’s Pope.’ …

In fact,  history’s most savage mass murderers – Adolf Eichmann, Dr Josef Mengele, better known as Auschwitz’s ‘Angel of Death’, and Franz Stangl, commandant of the Treblinka extermination camp – escaped justice down the ‘ratline’ that ran straight through the Vatican state in Rome.

Senior members of the Roman Catholic hierarchy – marinaded in virulent Judeophobia and obsessed by Bolshevism – organised the escape of thousands of the most debauched, cruel monsters to a peaceful, prosperous retirement in Catholic South America.

The question that’s salient today, as Pope Pius XII heads for canonization,  is how much did he know of this most shameful episode in the 20th century history of the Vatican?

If he truly is a saint, his supporters must surely have nothing to fear from the publication of the contents of the Eichmann dossier.