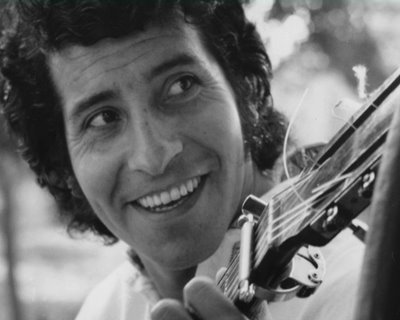 Victor Jara, murdered by one of Pinochet's death squad during the 1973 coup in Chile

SANTIAGO, Chile -- A Chilean government lawyer is seeking to arrest four retired army officers for the killing of renowned folk singer Victor Jara during the 1973 coup.

The Interior Ministry's Human Rights Program submitted a formal request for their detention to Judge Juan Fuentes Belmar on Tuesday, according to an official familiar with the case. The official spoke to the Associated Press on condition of anonymity to avoid influencing the magistrate's decision.

Jara, a folk singer, theater director, communist and outspoken supporter of socialist President Salvador Allende, was detained in a stadium along with 5,000 other leftists when Gen. Augusto Pinochet took power in a military coup on Sept. 11, 1973. Pulled from the crowd, Jara was tortured and shot to death by the military as a message to the rest.

The killing turned Jara into an international symbol of resistance to the Pinochet government, which lasted until 1990.

Some witnesses have accused Dimter of being a military officer long known only as "The Prince," who led torture and killings at the stadiums and is believed responsible for Jara's death.

Dimter has denied killing Jara and sued a journalist who wrote an article identifying him as "The Prince."  So far the only person to be prosecuted for Jara's killing is former conscript Jose Paredes Marquez, 56, who proclaims his innocence.

In an interview with the AP last year, Paredes said all conscripts were carrying machine guns and Jara's body would have been torn apart by such a weapon.  An autopsy from 2009 found that the folk singer died from dozens of gunshot wounds all over his body, and the singer's widow, Joan Jara, has said she had no difficulty recognizing his remains.

Tuesday's petition seeking the arrest warrants was filed by lawyer Cristian Cruz of the Human Rights Program. Cruz and a colleague were recently laid off, effective Jan. 1, by the center-right government of Sebastian Pinera, which cited budgetary pressures.