A new tally from New America think tank shows that some Americans are worried about the wrong thing when it comes to stateside attacks. In the nearly 14 years since September 11, 2011, when Al Qaeda operatives used airplanes to kill nearly 3,000 Americans, more people have died at the hands of people they describe as "right-wing terrorists" than people they classify as "jihadists."

By New America’s count, 26 people have died in attacks credited to so-called jihadists, including the Boston Marathon bombing in 2013 and the 2009 shooting at Fort Hood in Texas that left 13 dead. When it comes to attacks waged by people professing far right-wing ideologies—including white supremacists, antigovernment zealots, and other non-Muslim extremists—48 lives have been taken. The nine victims of the Mother Emanuel church massacre are included in that number. In all, New America found that there were 19 deadly attacks by right-wing extremists, versus seven "jihadist" attacks. Murders in which no ideological motive was determined, such as the Sandy Hook shooting, are not included in the tally.

University of Massachusetts terrorism research John G. Horgan told The New York Times that scholars have long known that the data doesn’t support public perception: “There’s an acceptance now of the idea that the threat from jihadi terrorism in the United States has been overblown. And there’s a belief that the threat of right-wing, antigovernment violence has been underestimated,” he said. “If there’s one lesson we seem to have forgotten 20 years after Oklahoma City, it’s that extremist violence comes in all shapes and sizes. And very often, it comes from some place you’re least suspecting.” 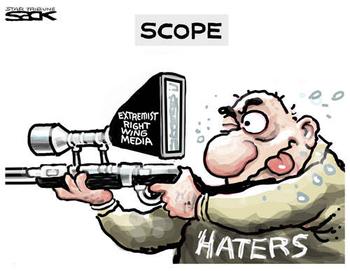 Also see: You're Twice As Likely To Be Killed By American Radicals Than By Islamic Terrorists: "According to recent statistics, nearly twice as many people have been killed on American soil by right-wing extremists since 9/11 than by jihadists. The numbers may be hard to believe — and to digest — but a report by The New America Foundation shows that in the almost 14 years after that singular act of terrorism, 26 people died during "deadly jihadist attacks," whereas 48 died during 'deadly right-wing attacks.' ..."'

What are the motives that define an act of terrorism? That's one of the questions that surfaced last week after the deadly attack in Charleston.

The shooter is believed to have been influenced by white supremacist groups. The Justice Department has not called this an act of terrorism, but a lot of Americans are.

MARTIN: And according to a new report, that kind of homegrown threat is twice as prevalent than the threat posed by Islamic extremists. The report by the New America Foundation says since 9/11, self-proclaimed Islamic radicals have killed 26 people in the United States. Non-Muslim extremists have killed 48. Peter Bergen helped lead that study. I asked him to explain how his organization defined terrorism.

PETER BERGEN: A commonly accepted view of terrorism is an act of political violence against a civilian target by someone other than a state, so that's the definition we used. And we found that there were, you know, 26 deaths that are attributable to jihadist terrorists since 9/11.

BERGEN: Within America's borders, attributable to jihadist terrorists. And we found 48 attributable to people with extreme right-wing, racist or antigovernment views. Now, of course, you know, on 9/11, almost 3,000 Americans were killed by al-Qaida. And that's, of course, the lens through which American see a lot of terrorism. But the fact is that there is violence done in the name of all sorts of ideologies that isn't just jihadi in flavor, including in the United States.

MARTIN: Can you tick through a couple of those cases. You say extreme right-wing views.

BERGEN: Well, so for instance, Glenn Frazier Cross attacked a Jewish Community Center last year killing two and then went to another Jewish center and killed another person, and when he was arrested, shouted heil Hitler. He's pleaded not guilty, but this seemed like a pretty clear case of political violence done sort of with neo-Nazi intentions. And then, of course, on the jihadi side, there are some cases that are well-known, like Ft. Hood. But there are cases that are less well-known - for instance, Carlos Bledsoe, who attacked a Little Rock, Ark., recruiting center, killing one soldier in 2009.

MARTIN: Why do these labels matter?

BERGEN: Well, it's an interesting question. I mean, I think that as an analytical matter, it's quite important to distinguish between acts of simple murder and acts that are politically motivated. And, you know, in the 1970s in the United States, we saw a lot of political violence that was terrorist in nature, whether it was from the left or Weather Underground or the Black Panthers or whether it was Puerto Rican nationalists. There's been political violence for all sorts of reasons in the United States throughout our history and sort of trying to identify, you know, what is and what is not an act of political violence is important.

And then also, by the way, Rachel, from a legal point of view, when people go into court, the Justice Department has certain guidelines about sentencing. So, for instance, if a crime is deemed to have a terrorist underpinning, the sentences that are handed down are longer than it would be just for a conventional crime.

MARTIN: The Obama administration held a big conference on countering violent extremism last year. And it took great pains - it made sure not to limit the conversation to Islamic extremism. So the White House has been sensitive to this, but is that just optics to some degree? Is there any real effort to counter what you have described - this other kind of threat, this non-Muslim radical threat?

BERGEN: Well, I think that's a great question. And certainly, a lot of the countering violent extremism work and thinking has been about jihadis. But this should be equal work done with people who have neo-Nazi ideas or extreme antigovernment ideas that are willing to conduct violence in their name. And, I mean, one of the interesting things about the piece in The New York Times today, which cited our work, is the number of police chiefs who are very concerned about the so-called sovereign citizens movement in their areas and other kinds of extreme right-wing political groups because, of course, they often target police officers. So certainly, police - local police chiefs are keenly aware of the fact that they need to be looking at other forms of political violence as well as jihadists.

MARTIN: Peter Bergen is a terrorism expert who helped lead a study from New America comparing homegrown terrorist threats. Thanks so much for talking with us.