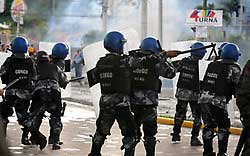 Anyone who thinks that social and political instability in Honduras ended with the election of Porfirio Lobo as the president of the republic is mistaken, according to the Committee of Families of the Detained and Disappeared in Honduras (COFADEH).

Human rights violations, political persecution, and selective political murders continue to be the order of the day, which indicates that the 28 June 2009 military coup is continuing.

Oliva explained that this year ten teachers have been murdered for their opposition to the current government, which has continued the work of the coup regime.

Oliva participated in the 7th "Herbert Anaya Sanabria" International Congress on Human Rights, highlighting that the method of persecution employed by these "paramilitary groups" in Honduras is very particular. In fact, they don't kill the leaders of social organizations but their closest family members, in order to cause distress in the organizations opposed to the ruling regime.

"There is a death squad called CAM (Commando Álvarez Martínez), which is carrying out persecution clearly and brazenly," reported Oliva.

The human rights situation in Honduras is precarious, so much so that the Inter-American Commission on Human Rights, an arm of the Organization of American States, notes in its report titled "Honduras: derechos humanos y golpe de Estado" (Honduras: Human Rights and Coup d'État) that the current policies of the Honduran state permit violations of human rights of individuals.

In fact, 56 defenders of human rights are being threatened by various armed groups. Oliva called on the OAS to demand that the United States not support the Honduran armed forces while human rights violations are continuing in this Central American country.

In Oliva's opinion, it's well and good that the OAS has issued a report, but the OAS must demand that human rights be actually respected in Honduras.

"We live in deplorable conditions, under bad weather, without potable water, without electricity, in houses made of large tin sheets, and on top of it all, over the last six months they have murdered 16 of our compañeros, trying to intimidate us so they can deprive us of the right to land," said Matías Valle Cárdenas, Vice President of the United Peasant Movement of Aguán (MUCA) in the department of Colón in northern Honduras.

Since the coup d'état, human rights violations have considerably increased in Honduras. At the same time, Honduras has become one of the most violent countries in Latin America. The homicide rate has sharply risen from 2004 to 2009, increasing from 39.7 to 66.8 per 100,000. In 80.9% of the cases, victims are individuals ages 15-44.

MUCA has said that reported homicides and constant threats are part of a plan of Honduran landlords Miguel Facusse and Reynaldo Canales to appropriate the lands that belong to about 2,400 families, using legal and extralegal means.

Johnny Rivas, Secretary General of MUCA, explained: "In the last six months we have been attacked by the military and police, our right to land has been violated, we have been displaced many times, but the need is great, and every day we are continuing to fight for our rights to be able to survive." He added: "Since the coup all of us have lost our constitutional rights."

The victims who have turned to Honduran legal authorities to report attacks on their lives, nevertheless, have not received any positive response, thus unable to confront this scourge of violence. Now they are seeking the collaboration of the international community to establish a human rights observatory.

Similarly, the victims have no confidence in the Porfirio Lobo government, since all they see is a continuation of the de facto government set up by Roberto Micheletti. The MUCA vice president said that 300 of his compañeros have been detained while fighting for their demands.

It is urgent to end the attacks on the impoverished communities in Honduras, and international organizations can lend their weight to this process to establish a human rights observatory, as demanded by thousands of Hondurans. If this situation continues, violence will grow further and can bring catastrophic consequences to the people of Honduras.