Meanwhile, Republican Kari Lake has made attacking Democrats with lies about their positions on sex crimes a part of her campaign for Arizona governor. 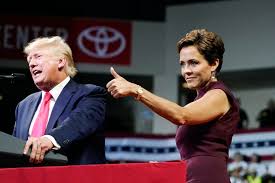 Kari Lake, the Republican nominee for governor of Arizona, accepted hundreds of dollars in campaign contributions from eight people convicted of sexual misconduct, including rape, child molestation, and child pornography, according to a review of campaign finance records by the American Independent Foundation.

Lake accepted the contributions at the same time as her campaign was saying of her Democratic opponent, Arizona Secretary of State Katie Hobbs, "Convicted sex offenders are coming into this country through our open southern border and @katiehobbs can't be bothered to care."

Lake accepted a total of $695 from convicted sex offenders, according to campaign finance records. She has meanwhile made bigoted attacks against the LGBTQ community and its allies, accusing them of "grooming" children as a way of enabling them to abuse them, using a recent Republican scare word deployed against anyone who disagrees with their anti-LGBTQ efforts.

Lake's campaign did not respond to a request for comment on whether she'd be returning the hundreds of dollars she accepted from the convicted sex offenders.

Hobbs had held the lead in polling of the Arizona gubernatorial election for the majority of the race. However, Lake has opened up a 1.3% lead in recent days, according to the FiveThirtyEight polling average.

Inside Elections, the nonpartisan political handicapping outlet, rates the race a toss-up.