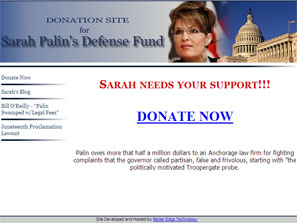 An investigator has determined that former Gov. Sarah Palin's legal defense fund broke ethics law and said Palin has agreed to settle the matter by having the trust return more than $386,000 to donors.

Tim Petumenos, an Anchorage attorney hired by the state ethics board to investigate, said the legal defense fund violated state law because it "constituted using public office to obtain private benefit." Petumenos said the legal defense fund, set up while Palin was still governor, inappropriately used the word "official" on its website, suggesting Palin's endorsement as governor of Alaska.

The trust must return all the "thousands" of donations it received before she resigned as governor last summer, according to the settlement agreement signed by Palin.

Palin advisers created the Alaska Fund Trust in April 2009 to help her pay legal bills compiled defending herself in the "Troopergate" investigation and a series of other ethics complaints. Palin's personal lawyer, Tom Van Flein, "strongly advised" that the trust be vetted by the Alaska Department of Law to make sure it was legal under Alaska ethics law, Petumenos said in his report.

But Palin instead chose to follow the advice of another attorney who recommended against seeking input from Palin's ethics supervisor, the attorney general, and instead to simply contest the "inevitable" ethics complaint when it came, Petumenos wrote.

"In retrospect the advice to seek preapproval from the ethics officer provided by the Governor under the statute seems the better course, particularly when this was the first attempt at such a trust agreement in Alaska and ethics complaints were likely," Petumenos wrote. "Governor Palin was nevertheless following the express advice of one of her attorneys who told her the Trust complied with all laws and was indeed unassailable."

Neither Petumenos nor Van Flein would name the attorney who gave Palin that advice. Palin was advised by two national firms, in addition to Van Flein of Anchorage. They were McKenna Long & Aldridge and Baker and Hostetler.

Petumenos was the second independent counsel hired by the state's Personnel Board to investigate an ethics complaint brought against Palin over the fund on April 28, 2009. The first, Anchorage attorney Tom Daniel, last summer found "probable cause" that Palin's Alaska Fund Trust violated state ethics laws.

Daniel left the case in January because Palin challenged that his law firm, Perkins Coie, had a conflict of interest. Perkins Coie is a big national firm that represented Barack Obama's presidential campaign and handles legal issues for many prominent Democratic groups. In his report, Petumenos said he started from scratch in January and reached a similar conclusion to Daniel's report.

Petumenos said Palin's fund violated the law in two ways: It used the governor's official position for her personal gain, and the fund's trustee, Kristen Cole, was also a public official who provided a "subtantial private benefit" to the governor. Palin had appointed Cole to be chair of the state agriculture board, the creamery board, and the royalty oil and gas advisory board, Daniel wrote in his report.

Petumenos found the 2008 GOP vice presidential nominee acted in good faith and relied on the advice of lawyers when setting up the fund, and recommended no further sanctions. He said the evidence supports Palin's contention that she did not "knowingly" break state ethics law with the legal defense fund.

In the settlement, signed by Palin, she agrees "to continue to decline to accept funds donated prior to the date of her resignation from the governor's office."

Van Flein said Thursday he did not know if the fund would dissolve. But a new legal defense fund was set up for Palin on Thursday, called the Sarah Palin Legal Defense Fund. It's led by Tim Crawford, treasurer for Palin's political action committee, and its website is soliciting contributions.

Petumenos said he issued subpoenas for documents and deposed five witnesses, including Palin. The terms of the trust showed that its benefits to Palin weren't limited to legal fees, and that her family, and other members of the executive branch, could also tap into the fund.

"The payments authorized by the Trust may be payments to reduce private debts, payment of private income taxes and, theoretically at least, are subject to withdrawal demand for any purpose," he wrote in his findings. "Thus the Trust itself contemplates personal gain and financial benefit to executive branch employees."