(gfpc) Several of the uttermost right-wing parties in Europe are proceeding – with the cooperation of German organizations – to forge international alliances. The Austrian Freedom Party (FPÖ) has announced its extension of relations to the rapidly developing US-American Tea Party movement. Just a few days ago, FPÖ functionaries visited Israel, together with leading party members of the Belgian Vlaams Belang (The Flemish Cause), in an effort to dispel their reputations of being anti-Semitic. Both parties are based in the tradition of Nazi collaboration. They are among the strongest uttermost right-wing parties on the continent and are profiting from the renewed German hegemony over Europe. They are including the German “pro-“movements into their current efforts to build an alliance. Parallel structures are being established, also with German influence, under the leadership of the Dutch racist, Geert Wilders, meaning that two rival racist party networks are vying for the leadership of the European extreme right – both with German participation. 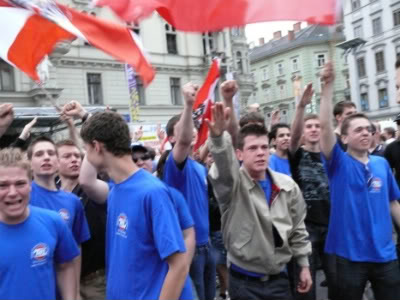 The Austrian Freedom Party (FPÖ) has announced the expansion of its relations with the US-American Tea Party movement. FPÖ Chairman, Heinz-Christian Strache announced his plans to visit the United States in the coming year for meetings with representatives of the movement, referring to the “very interesting grassroots movement coming directly from the disgruntled population” explains Strache in reference to the racist-imbued Tea Party.[1] The FPÖ leader returned from Israel just a few days ago, where he visited, along with leading representatives of the Vlaams Belang and the Sweden Democrats, for talks with right-wing Israeli politicians. The objective of their visit was more than merely expanding the international network of Europe’s utmost right-wing parties, but above all to help dispel their anti-Semitic reputations. The participants signed a “Jerusalem Declaration” for the purpose of declaring their common struggle against “fundamentalist Islam”. The German “Freedom Party” was also represented.

Both of the two leading parties of the delegation to Israel, which, in the meantime have returned home, stand in the tradition of Nazi collaboration. In the Austrian political spectrum, the FPÖ is the party of the so-called third camp, the milieu that has favored Austria’s annexation by Germany since the 19th century.[2] Accordingly, many former Nazi activists, who earlier had applauded the Nazi annexation of Austria, had participated in the 1956 founding of this party. In the years from 1956 – 1978, the two first party chairmen had been active members of the Nazi SS. Various subsequent FPÖ politicians are on record for having praised Nazi organizations and their activists. Nazi Germany sought “to unify the continent” declared the FPÖ theoretician, Andreas Mölzer,[3] a member of the delegation just returning from Israel. Today the party is profiting from the fact that Vienna is strengthening its ties to the EU’s hegemonic power, Germany, and thereby drawing closer to “Third Camp” strategies. Germany has a predominating economic influence on Austria [4] and exclusive political relations to that country,[5] from which the FPÖ affiliated sectors of the Austrian establishment are strongly profiting. This formed the basis for the 17.5 percent of the votes, won by the party in the 2008 National Council (legislative) elections and even the 26.2 percent of the votes in the Vienna City and District Council elections of 2010. 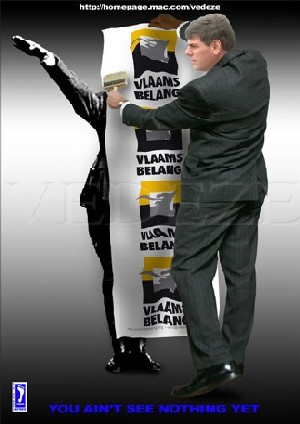 In end effect, the Vlaams Belang is also rooted, in the collaboration with the German Reich. Part of the Flemish movement, seeking to have the northern – Dutch speaking – part of Belgium secede and form an independent country, “Flanders,” had collaborated with Germany, already back in World War I and continued to do so in World War II. Berlin was to furnish the necessary support for the secessionists, who were seeking a “Germanic” alliance with the Reich, allowing them to split off from French speaking Southern Belgium, permitting them to withdraw from the French sphere of influence.[6] Due to the war, Flanders never reached the point of secession. In 1945, the Nazi collaborators continued their political activities, first in the People’s Union Party, then in the successor Vlaams Blok (Flemish Block) and the Vlaams Belang (Flemish Cause).

A few years ago, Filip Dewinter, one of the leaders of the Vlaams Belang, spoke of the Nazi collaborator, Staf de Clercq as “one of the historical leaders of the party.” That is “part of the history of the Flemish movement. We grow out of this movement.”[7] Since the 1990s, the Vlaams Belang has been garnering around 20 percent of the votes in Flanders and, until recently, was the strongest Flemish separatist party.[8] Its pro-German position is profiting from the fact that Flanders is economically very closely allied with Germany. In 2009, 80 percent of all Belgian exports to Germany had originated in Flanders. The port of Antwerp is very important to German industry. The expansion of Germany’s influence in Europe is therefore being accompanied by the promotion of pro-German tendencies in Flanders.

Looking for a German Ally

For years already, FPÖ and Vlaams Belang have been seeking cooperation partners in Germany, for two reasons: to increase their influence on the continent, a pan-European alliance of the most extreme right-wing parties needs an ally in the most populous EU member country and – because of their pro-German orientation – both parties need a German partner. But Germany has no extremist right-wing party of significant influence. The NPD does not hide its pro-Nazi orientation and could therefore not be a serious consideration for the FPÖ or Vlaams Belang. This is why, over the past few years, both parties have been seeking to organize the “pro-” movements (“pro-Cologne”, pro-North-Rhine-Westphalia – “pro-NRW”) as their German allies. The FPÖ announced the establishment of a common office in North Rhine Westphalia, as a sort of development aid for “pro-NRW”. Even though “pro-NRW” was not represented on the current trip to Israel, it – retrospectively – signed the “Jerusalem Declaration”. This demonstrates that the “pro-“movements want to participate in relations with Israel and be cleared of any anti-Semitic suspicions.

Even though it is not part of the Austrian/Flemish/German alliance structures, the German “Freedom Party” was represented on the FPÖ/Vlaams Belang’s trip to Israel, but it immediately distanced itself from its fellow travelers. The “Freedom Party” was founded recently in Berlin – among others by third rank CDU dissidents and is cooperating with Geert Wilders and his racist Dutch “Freedom Party” (Partij voor de Vrijheid – PVV). To be able to enter coalitions, both of these parties are trying to draw the lines of demarcations between themselves and the extreme-right. Parallel to the FPÖ/Vlaams Belang alliance structures, Wilders is currently seeking to establish an international alliance that would include the German “Freedom Party”. At present, both alliance structures are competing with each other. They could only merge, if the epigones of the Austrian and Flemish Nazi-collaborators would cleanse their right-wing extremist and anti-Semitic stain and become possible coalition and government partners – as Geert Wilders is today in the Netherlands. This was the objective of their trip to Israel.

Right-wing extremist pro-German structures, some dating back to days of Nazi collaboration, are growing in Europe and are seeking acceptability to govern. Having become stronger over the years, German hegemony is providing them favorable conditions. We will report in January on other structures, dating back to Nazi collaboration, for example in Italy and Hungary, which have recently been very successful.