See: “The Biggest Political Scandal of the Past Decade: Lockheed/Sandia, Bush’s State Dept., Pakistan’s Nuclear Smuggling & the Hidden Parapolitics of the Plame Scandal”

“They could literally have stopped [Khan] in his tracks (in the 1970s). It would have done an enormous amount to delay Pakistan building its own nuclear weapon, to delay the arms race on the South Asian continent and to stop Iran from getting where it is on the nuclear front,” said Douglas Frantz, who with Catherine Collins authored “Fallout: The True Story of the CIA’s Secret War on Nuclear Trafficking.”

“This is something that the CIA, in our view, has been guilty of for more than 30 years now,” Frantz told National Public Radio’s “Fresh Air.”

Khan in the 1970s acquired details in the Netherlands on producing fissile material for nuclear weapons. The European nation, concerned by the potential embarrassment of the leak becoming public, consulted with the CIA on whether to detain the scientist, the journalist said. 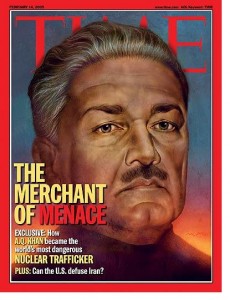 “The CIA told the Dutch, ‘Let him go; we’ll watch him,'” Frantz said. “This was in 1975. In the subsequent years and decades, Khan became clearly the most dangerous proliferator in history.”

Pakistani authorities ultimately detained Khan at the beginning of 2004.

The CIA was believed to have obtained as informants Friedrich, Marco and Urs Tinner, Swiss engineers already deeply involved in the smuggling ring. Switzerland later launched a probe into allegations that the men had supplied Libya and Iran with components and expertise for building uranium enrichment centrifuges (see GSN, Dec. 23, 2010).”

The CIA enlisted senior officials in the Bush administration … to begin to put pressure on the Swiss government to kill this investigation,” Franz said. “But two weeks ago, on December 23, a Swiss magistrate announced that he had filed a report with the Swiss attorney general recommending charges against the three Tinners for selling nuclear equipment to Libya. … If they go to trial, all of this could come out in the open eventually, which would be absolutely fascinating” (Dave Davies, National Public Radio, Jan. 4).