“… One man suffered a heart attack, guns were held to the heads of children as they were dragged from their beds, family pets were kicked, grandparents were handcuffed and forced to lie on the floor and children were removed from their parents’ custody …” 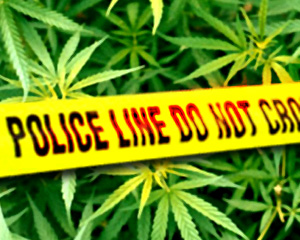 Medical marijuana advocates plan to protest against what they claim were aggressive and uncalled for raids on local cannabis delivery services at a rally planned for Tuesday, Jan. 11 at 7:30 a.m., in front of the San Luis Obispo County Courthouse.

During the December 27 arrests, one man suffered a heart attack, guns were held to the heads of children as they were dragged from their beds, family pets were kicked, grandparents were handcuffed and forced to lie on the floor and children were removed from their parents’ custody, multiple sources said.

“They busted my door down and cuffed me with a gun to my head,” Steven Gordon said. “I showed them my paperwork and my documentation and asked what I did wrong. They said I sold to a police officer.”

After a two month investigation, the San Luis Obispo County Narcotic Task Force said that the delivery services they investigated were violating California’s Marijuana Compassionate Use Act and Medical Marijuana Program by transporting and selling marijuana “illegally” throughout San Luis Obispo, Santa Barbara and Monterey Counties. At least six agencies and 50 agents participated in the investigation and arrests of 15 people.

The raids appear to be based on an interpretation of state law – specifically that everyone in a collective must be actively participating in the cultivation of the plants.

Rachel Tamagni, 57, of Paso Robles began using medical marijuana to replace medications that caused her severe depression. She started the delivery service after having an attorney help comply to legal requirements.

“I wanted to help others,” Racheal Tamagni said. “We are in the red on this. We only deliver to five people.”

The Tamagnis’ 8-year-old part Chihuahua died shortly after the raid on their home. They believe the three hour search overly excited the fragile dog.

“She was a rescue dog with a heart condition,” Charles Tamagni said. “We were careful to not excite her, but there was so much tension here that morning.”

The Tamangis were the last two people placed in a van that deputies drove throughout the county picking up those they arrested.

Some arrestees were left in the task force van for more than three hours while officers made arrests, sources said. Those inside were not allowed to use the restroom and Peter Miller ended up urinating in the van.

“When he urinated, they were just laughing, they didn’t care,” Steven Gordon said.

Gordon, a Pismo Beach single father of a 10-year-old, said he keeps his medical marijuana in a safe in his garage.

“They took my daughter and drug tested her,” Gordon said. “My daughter is a straight A student at Shell Beach Elementary. They served people with legitimate paperwork.”

Gordon regularly provides medical marijuana to his patients for free. He said he even gave the undercover officer free medicine during his second delivery to her.

An agent using the name Amy Dobson made an appointment with San Luis Obispo based Dr. Atsuko Rees to obtain a medical marijuana card. Some of Rees’ former colleagues accuse her of abusing laws meant to help patients with chronic problems.

About a year ago, some of her former colleagues asked the San Luis Obispo Sheriff’s office to investigate Rees.

Following the arrests, a press release from the task force said that agents seized approximately four grams of cocaine, 57 pounds of marijuana, 162 marijuana plants, 146 grams of hash, 718 grams of hash oil, seven firearms and $492,931 in cash.

The task force failed to mention that the seven firearms seized were discovered in a locked gun safe at the Paso Robles home of Peter Miller, an avid hunter. In addition, the cocaine was seized from only one residence.

The first set of arraignments is scheduled for January 11, at 8 a.m. at the San Luis Obispo County Courthouse.