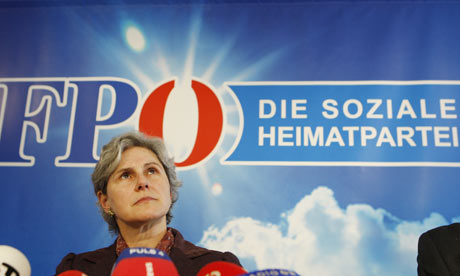 When Austrians go to the polls on April 25 to vote for president, they’ll have to choose between incumbent President Heinz Fischer, a Social Democrat, and his main rival, Barbara Rosenkranz, a regional leader of the far-right Freedom Party (FPO), a 51-year-old mother of 10 and the wife of a key longtime member of a now banned neo-Nazi party. That fact, not surprisingly, sparked an outcry over her ambiguous statements about the Holocaust and criticism of Austria’s tough 1947 anti-Nazi law.

In response, Cardinal Christoph Schonborn, the Catholic archbishop of Vienna, said that “Someone who questions the National Socialism prohibition law and fails to make clear statements regarding the Holocaust is not an option for me personally.”

According to the JTA article, members of Austria’s 8,000-member Jewish community joined political, civic and social network groups in spearheading opposition to Rosenkranz’s presidential bid. A Jewish community statement called her candidacy an “embarrassment” for Austria and a “mockery of the 65,000 Austrian Jews killed in the Shoah.”

The JTA reports that Jewish community president Ariel Muzicant helped organize a candlelit anti-Rosenkranz rally on March 25, drawing thousands outside the Hofburg Palace, the seat of the Austrian presidency. The rally grew out of an anti-Rosenkranz Facebook group that had more than 91,000 members as of two weeks before the elections.

Like Germany, Austria has a law banning Holocaust denial. (See my earlier column for additional information.) Following the public outcry over her criticism of the Austrian law banning Holocaust denial, Nazi organizations and Nazi ideology as “an unnecessary restriction” on freedom of opinion, Rosenkranz signed a public declaration “disassociating” herself from Nazi ideology. This has not helped her in the public eye and at least one journalist branded Rosenkranz a “closet Nazi.”

American historian Stan Nadel, who teaches in Salzburg, said Rosenkranz “doesn’t say the Holocaust never happened, she just says she believes in the history she was taught in school; she went to school at a time when school history courses generally stopped with 1918,” Nadel said. “Her anti-Semitic supporters know that and they understand she is covertly denying the Holocaust, but she hasn’t said it out loud, so she hasn’t broken the law.”

Knowing all this about Rosenkranz, will Austrian’s elect her as president? Will they make a closet Hitler their leader? That’s a scary thought for an American Jew. I can’t even imagine the fear that thought puts into the hearts and souls of Austrian and European Jews.