San Diego FBI HQ to be Built by Mobbed-Up Developer

Las Vegas's Molasky Group of Companies will construct a $100 million, four-story San Diego headquarters for the Federal Bureau of Investigation. Ironies abound. The Molasky Group of Companies was founded by Irwin Molasky and now run by his children. The elder Molasky and three others, including notorious bootlegger and owner of illegal casinos, Morris (Moe) Dalitz, developed La Costa in North County.

Dalitz was grilled by the Kefauver committee's organized crime committee in the 1950s. Dalitz was one of the kingpins of the Cleveland mob during Prohibition. After that era ended, he ran illegal casinos in Ohio and Kentucky, and ultimately ended up in Las Vegas, where he was generally known as the peacemaker who kept the various mob groups from attacking one another. A story in the Las Vegas Review-Journal related Dalitz's life in the mob, and in reputable businesses.

The 2008 book "Havana Nocturne," which tells how the U.S. mob took over Havana, spells out how Dalitz was one of the attendees at the infamous Havana Conference at the Hotel Nacional in 1946. Among other dignitaries who attended were Meyer Lansky of the Bugs and Meyer Mob, Lucky Luciano, Tony (Big Tuna) Accardo, Albert (Lord High Executioner) Anastasia, and Frank Costello, "the Prime Minister of the Underworld." 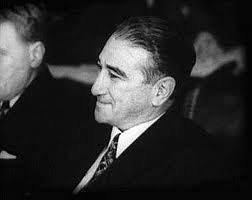 Dalitz was a partner with Molasky in a hospital, too. The bank controlled by the late C. Arnholt Smith made the interim loans on La Costa, and the notorious Central States Teamsters Fund would then assume the loan, according to a former official of Smith's long-defunct U.S. National Bank.

Not long after La Costa was built, Penthouse Magazine published an article saying that the resort had been built and was frequented by gangsters. Then ensued a lengthy lawsuit. Eventually, Penthouse issued a statement that it did not mean to imply that Molasky and another partner, Merrv Adelson "are or were members of organized crime or criminals." Dalitz was not included in the statement. Molasky and the Molasky Group of Companies are highly respected in Las Vegas. So, too, was Dalitz, now deceased. As recently as 2008, Dalitz's daughter lived in Rancho Santa Fe. The Molasky company has built a number of FBI buildings.

My thanks to Matt Potter for alerting me to this story. It ran in the Union-Tribune yesterday (Jan. 14) without any mention of this history.

In light of this, yesterday’s “mobster roundup” in the northeast looks like theater – well timed too, just after story comes out.

The fbi is in fact a global criminal enterprize and must be put out of business.