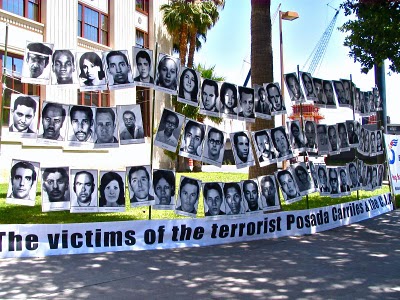 An ex-CIA operative told immigration officials in 2005 that he was not involved in hotel bombings in Havana that killed an Italian tourist, according to a transcript read at his perjury trial Thursday in U.S. District Court.

Anti-Fidel Castro militant Luis Posada Carriles is facing 11 counts of perjury, obstruction and naturalization fraud, accused of making false statements during immigration interviews five years ago in El Paso, after he sneaked into the United States. Prosecutors say he lied about how he slipped into the country and also failed to acknowledge his role in 1997 Cuban hotel bombings, even though he had admitted responsibility in interviews with the New York Times.

In the transcript from August 2005, Posada explains that a newspaper interview in which he claimed responsibility for planning them was conducted in English, and he therefore did not understand the questions.

Posada, 82, was seeking American citizenship and under oath during the hearings in El Paso when Homeland Security attorney Gina Garrett-Jackson asked if he arranged for associates to plant bombs that exploded in a popular tourist restaurant and a number of luxury hotels in Havana. An Italian tourist was killed.

When he denied involvement, Garrett-Jackson asked Posada about his admitting planning the attacks in interviews with the Times from Aruba in 1998.

She read from a transcript of that hearing, telling the jury that Posada responded through an interpreter, "the interview was conducted in English, a language I do not know," and that he added, "there were illegal recordings made" of what was said then.

Garrett-Jackson told of asking Posada if he viewed the bombings as "a very big event." She said he made several responses, including "that doesn't mean that it was me," and "I don't agree with . . . I don't know. I don't have an opinion about that."

Audio recordings of those hearing were then played for the jury.

Posada worked for the CIA in the early 1960s under the codename, "AMCLEVE/15" and remained a paid informant for years afterward. In court, he wears an earpiece providing simultaneous translation to the proceedings, even though declassified U.S. government documents indicate he speaks and understands English.

Establishing that Posada lied during immigration hearings is key to the case against him, even though U.S. authorities have not charged him with any crime in the hotel bombings, only for lying about them and lying about how he made it to U.S. soil five years ago. Prosecutors say they plan to call around 17 total witnesses.

They charge he sailed from Mexico to Florida on a shrimp boat converted into a yacht, even though he said under oath that he paid a smuggler to take him through Mexico to Houston, where he says he took a bus to Miami.

The governments of Cuba and Venezuela say Posada not only orchestrated the hotel bombings, but also planned an explosion aboard a Cuban airliner in 1976 that killed all 73 passengers and crew. A U.S. immigration judge has previously ruled, however, that Posada cannot be deported to face charges in either Venezuela or Cuba because of fears he could be tortured.

A Venezuelan military court once acquitted Posada of charges in the airline bombing, but the decision was later thrown out. He escaped from prison in 1985, before a civilian trial was completed.

Speaking to reporter Ann Louise Bardach in 1998, Posada admitted involvement in the Havana hotel bombings, saying they were only meant to "break windows and cause minor damage" and that the death of Italian Fabio di Celmo was "bad luck." He later recanted his involvement.

Prosecutors say Posada granted the taped interviews with Bardach because he was concerned the attacks in Havana had not significantly frightened would-be visitors and hurt Cuba's tourism industry. Defense attorneys maintain the tapes of the Times interview were heavily doctored and that while Posada may have claimed some responsibility as a well-known Castro foe, he was not directly involved.

During her testimony Thursday, Garrett Jackson did not indicate why she asked Posada about past bombings during an immigration hearing, saying only that she "had received information" Posada was involved. She did not say where that information came from. Prosecutors also won't explain why Garrett-Jackson, based in Miami, came to El Paso to interview Posada.

Posada was born in Cuba but left after Fidel Castro came to power in 1959. In 2000, he was arrested in Panama in connection with an attempt to assassinate Castro there, but he received a presidential pardon in 2005. That March, his lawyer said Posada had come to Miami and was seeking U.S. political asylum, and he was arrested two months later on charges that eventually became perjury, obstruction and immigration fraud.