" ... The file exposes the absurdity, waste and pettiness of our national security state. And it seems to indicate that our security agencies prefer to hire those with mediocre or stunted intelligence, dubious morality and little common sense. ... " 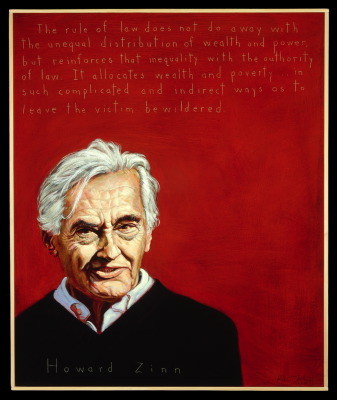 Today I will teach my final American history class of the semester to prison inmates. We have spent five weeks reading Howard Zinn’s “A People’s History of the United States.” The class is taught in a small room in the basement of the prison. I pass through a metal detector, am patted down by a guard and walk through three pairs of iron gates to get to my students. We have covered Spain’s genocide of the native inhabitants in the Caribbean and the Americas, the war for independence in the United States and the disgraceful slaughter of Native Americans. We have examined slavery, the Mexican-American War, the Civil War, the occupations of Cuba and the Philippines, the New Deal, two world wars and the legacy of racism, capitalist exploitation and imperialism that continue to infect American society.

We have looked at these issues, as Zinn did, through the eyes of Native Americans, immigrants, slaves, women, union leaders, persecuted socialists, anarchists and communists, abolitionists, anti-war activists, civil rights leaders and the poor. As I was reading out loud a passage by Sojourner Truth, Chief Joseph, Henry David Thoreau, Frederick Douglass, W.E.B Du Bois, Randolph Bourne, Malcolm X or Martin Luther King, I have heard students mutter “Damn” or “We been lied to.”

The power of Zinn’s scholarship—which I have watched over the past few weeks open the eyes of young, mostly African-Americans to their own history and the structures that perpetuate misery for the poor and gluttony and privilege for the elite—explains why the FBI, which released its 423-page file on Zinn on July 30, saw him as a threat.

Zinn, who died in January at the age of 87, did not advocate violence or support the overthrow of the government, something he told FBI interrogators on several occasions. He was rather an example of how genuine intellectual thought is always subversive. It always challenges prevailing assumptions as well as political and economic structures. It is based on a fierce moral autonomy and personal courage and it is uniformly branded by the power elite as “political.” Zinn was a threat not because he was a violent revolutionary or a communist but because he was fearless and told the truth.

The cold, dead pages of the FBI file stretch from 1948 to 1974. At one point five agents are assigned to follow Zinn. Agents make repeated phone calls to employers, colleagues and landlords seeking information. The FBI, although Zinn is never suspected of carrying out a crime, eventually labels Zinn a high security risk. J. Edgar Hoover, who took a personal interest in Zinn’s activities, on Jan. 10, 1964, drew up a memo to include Zinn “in Reserve Index, Section A,” a classification that permitted agents to immediately arrest and detain Zinn if there was a national emergency. Muslim activists, from Dr. Sami Al-Arian to Fahad Hashmi, can tell you that nothing has changed.

The file exposes the absurdity, waste and pettiness of our national security state. And it seems to indicate that our security agencies prefer to hire those with mediocre or stunted intelligence, dubious morality and little common sense. Take for example this gem of a letter, complete with misspellings, mailed by an informant to then FBI Director Hoover about something Zinn wrote.

"While I was visiting my dentist in Michigan City, Indiana,” the informant wrote.  “This pamphlet was left in my car, and I am mailing it to you, I know is a DOVE call, and not a HOCK call. We have had a number of ethnic groups move into our area in the last few years. We are in a war! And it doesn’t look like this pamphlet will help our Government objectives.”

Or how about the meeting between an agent and someone identified as Doris Zinn. Doris Zinn, who the agent says is Zinn’s sister, is interviewed “under a suitable pretext.” She admits that her brother is “employed at the American Labor Party Headquarters in Brooklyn.” That is all the useful information that is reported. The fact that Zinn did not have a sister gives a window into the quality of the investigations and the caliber of the agents who carried them out.

FBI agents in November 1953 wrote up an account of a clumsy attempt to recruit Zinn as an informant, an attempt in which they admitted that Zinn “would not volunteer information” and that “additional interviews with ZINN would not turn him from his current attitude.” A year later, after another interrogation, an agent wrote that Zinn “concluded the interview by stating he would not under any circumstances testify or furnish information concerning the political opinions of others.”

While Zinn steadfastly refused to cooperate in the anti-communist witch hunts in the 1950s, principals and college administrators were busy purging classrooms of those who, like Zinn, exhibited intellectual and moral independence. The widespread dismissals of professors, elementary and high school teachers and public employees—especially social workers whose unions had advocated on behalf of their clients—were carried out quietly. The names of suspected “Reds” were handed to administrators and school officials under the FBI’s “Responsibilities Program.” It was up to the institutions, nearly all of which complied, to see that those singled out lost their jobs. There rarely were hearings.  The victims did not see any purported evidence. They were usually abruptly terminated. Those on the blacklist were effectively locked out of their professions. The historian Ellen Schrecker estimates that between 10,000 and 12,000 people were blackballed through this process.

The FBI spent years following Zinn, and carefully cutting out newspaper articles about their suspect, to amass the inane and the banal. One of Zinn’s neighbors, Mrs. Matthew Grell, on Feb. 22, 1952, told agents that she considered Zinn and another neighbor, Mrs. Julius Scheiman, “to be either communists or communist sympathizers” because, the agents wrote, Grell “had observed copies of the Daily Worker in Mrs. Scheiman’s apartment and noted that Mrs. Scheiman was a good friend of Howard Zinn.”

The FBI, which describes Zinn as a former member of the Communist Party, something Zinn repeatedly denied, appears to have picked up its surveillance when Zinn, who was teaching at Spelman, a historically black women’s college, became involved in the civil rights movement. Zinn served on the Student Nonviolent Coordinating Committee. He took his students out of the classroom to march for civil rights. Spelman’s president was not pleased.

“I was fired for insubordination,” Zinn recalled. “Which happened to be true.”

“America has been a police state for a long time,” Zinn went on. “I believe that policemen should not have guns. I believe they should be disarmed. Policemen with guns are a danger to the community and themselves.”

Agents muse in the file about how to help their unnamed university source mount a campaign to have Zinn fired from his job as a professor of history at Boston University.

“[Redacted] indicated [Redacted] intends to call a meeting of the BU Board of Directors in an effort to have ZINN removed from BU. Boston proposes under captioned program with Bureau permission to furnish [Redacted] with public source data regarding ZINN’s numerous anti-war activities, including his trip to Hanoi, 1/31/68, in an effort to back [Redacted’s]  efforts for his removal.”

Zinn and the radical Catholic priest Daniel Berrigan had traveled together to North Vietnam in January 1968 to bring home three prisoners of war. The trip was closely monitored by the FBI. Hoover sent a coded teletype to the president, the secretary of state, the director of the CIA, the director of the Defense Intelligence Agency, the Department of the Army, the Department of the Air Force and the White House situation room about the trip. And later, after Berrigan was imprisoned for destroying draft records, Zinn repeatedly championed the priest’s defense in public rallies, some of which the FBI noted were sparsely attended. The FBI monitored Zinn as he traveled to the Danbury Federal Prison in Connecticut to visit Berrigan and his brother Philip.

“Mass murders occur, which is what war is,” Zinn, who was a bombardier in World War II, said in 1972, according to the file, “because people are split and don’t think … when the government does not serve the people, then it doesn’t deserve to be obeyed. … To be patriotic, you may have to be against your government.”

Zinn testified at the trial of Daniel Ellsberg, who gave a copy of the Pentagon Papers to Zinn and Noam Chomsky. The two academics edited the secret documents on the Vietnam War, sections of which had appeared in The New York Times, into the four volumes that were published in 1971.

“During the Pentagon Papers jury trial, Zinn stated that the ‘war in Vietnam was a war which involved special interests, and not the defense of the United States,’ ” his FBI file reads.

By the end of the file one walks away with a profound respect for Zinn and a deep distaste for the buffoonish goons in the FBI who followed and monitored him. There is no reason, with the massive expansion of our internal security apparatus, to think that things have improved. There are today 1,271 government organizations and 1,931 private companies working on programs related to counterterrorism, homeland security and intelligence in about 10,000 locations across the United States, The Washington Post reported in an investigation by Dana Priest and William M. Arkin. These agencies employ an estimated 854,000 people, all of whom hold top-secret security clearances, the Post found. And in Washington, D.C., and the surrounding area, 33 building complexes for top-secret intelligence work are under construction or have been built since September 2001. Together, the paper reported, they occupy the equivalent of almost three Pentagons or 22 U.S. Capitol buildings—about 17 million square feet.

Zinn in 1962 decried “the clear violations by local police of Constitutional rights” of blacks and noted that “the FBI has not made a single arrest on behalf of Negro citizens.” The agent who reported Zinn’s words added that Zinn’s position was “slanted and biased.” Zinn in 1970 was a featured speaker at a rally for the release of the Black Panther leader Bobby Seal held in front of the Boston police headquarters. “It is about time we had a demonstration at the police station,” Zinn is reported as telling the crowd by an informant who apparently worked with him at Boston University. “Police in every nation are a blight and the United States is no exception.”

We are amassing unprecedented volumes of secret files, and carrying out extensive surveillance and harassment, as stupid and useless as those that were directed against Zinn. And a few decades from now maybe we will be able to examine the work of the latest generation of dimwitted investigators who have been unleashed upon us in secret by the tens of thousands. Did any of the agents who followed Zinn ever realize how they wasted their time? Do those following us around comprehend how manipulated they are? Do they understand that their primary purpose, as it was with Zinn, is not to prevent terrorism but discredit and destroy social movements as well as protect the elite from those who would expose them?

Zinn’s book is revered in my cramped classroom. It is revered because these men intimately know racism, manipulation, poverty, abuse and the lies peddled by the powerful. Zinn recorded their voices and the voices of their ancestors. They respect him for this. Zinn knew that if we do not listen to the stories of those without power, those who suffer discrimination and abuse, those who struggle for justice, we are left parroting the manufactured myths that serve the interests of the privileged. Zinn set out to write history, not myth.  And he knew that when these myths implode it is the beginning of hope.

“If you were a Native American,” one of my students asked recently, “what would have been the difference between Columbus and Hitler?”