The Saga of Koch Industries - The Constantine Report
0 SHARES

Corpwatch » The Saga of Koch Industries

Koch Industries owed its creation to Fred C. Koch (1900-1967), a chemical engineer who developed a new cracking method for the refinement of heavy oil into gasoline. He and his wife Mary, members of the ultraconservative John Birch Society, had four sons — the second of whom became the company’s board chairman and chief executive officer while his younger brother, Charles, served as executive vice president.

In 2000, Koch Industries was served with a 97-count indictment over charges that it violated the Clean Air Act “by venting massive quantities of benzene at a refinery in Corpus Christi and then attempted to cover it up.” The company had told Texas regulators that its “releases of just 0.61 metric tons of benzene for 1995” were only “one-tenth of what was allowed under the law.” The government alleged that Koch Industries’ “true emissions that year measured 91 metric tons, or 15 times the legal limit.”

When the Koch company appeared in court, however, George W. Bush was in the White House, and the indictment had been substantially reduced to seven counts. The U.S. Department of Justice allowed Koch Industries to plead guilty to only one felony, that of hiding the disconnecting of a crucial pollution control device and not measuring the benzene emissions. The penalty assessed was five years probation, $20 million in fines and the cost of reparations.

A year later, on Aug. 24, 1996, Koch Industries suffered another setback near Lively, Texas, some 50 miles southeast of Dallas, when a “decrepit” Koch pipeline carrying liquid butane (lighter fluid) ruptured, filled the creek bed with vapor and the spark from a pickup’s ignition set off a bomb. Federal investigators found both “severe corrosion” and “mechanical damage” in the pipeline. The National Transportation Safety Board cited the “failure of Koch Pipeline Co. LP to adequately protect its pipeline from corrosion.” Installed in the 1980s, the pipeline had been unused for three years.

When Koch decided to start it up again in 1995, a water-pressure test had blown the pipe open. An inspection of just a few dozen miles of pipe near Lively found 538 corrosion defects. Although an expert witnessed that “essentially the pipeline is gone,” Koch Industries repaired only 80 of the defects — enough to allow the pipeline to withstand another pressure check — and began running explosive fluid down the line at high pressure in January 1996. A month later, employees discovered that a key anti-corrosion system had malfunctioned but was never fixed. 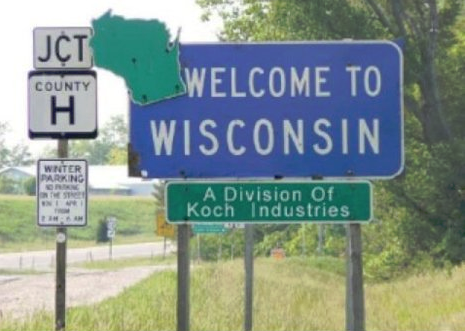 Charles Koch had made it clear to managers that they were expected to slash costs and boost profits. In a sternly worded memo that April, Charles had ordered his top managers to cut expenditures by 10 percent “through the elimination of waste” to increase annual pre-tax earnings by $550 million a year.

Charles Koch has since committed his company to obey federal regulations. “Even when faced with counter-productivity,” he writes,”we must first comply.” In 2000, Koch petroleum division entered into an agreement with the Environmental Protection Agency and the Justice Department to spend $80 million at three refineries to bring them into compliance with the Clean Air Act. After hitting Koch with a $4.5 million penalty, the EPA granted the company a “clean slate” for certain past violations.

When George W. Bush entered the White House in 2001, his campaign was greatly enriched with Koch money. Charles Koch might decry cronyism as “nothing more than welfare for the rich and powerful.” Correspondence, contacts and visits among Koch Industries representatives and the Bush White House generated nearly 20,000 pages of records, according to a Rolling Stone report.

In 2007, the administration installed a fiercely anti-regulatory academic, Susan Dudley, who hailed from the Koch-funded Mercatus Center at George Mason University, as its top regulatory official. Today, Koch points to awards it has won for safety and environmental excellence.

The company’s spokesman also recalled that “in the distant past, when we failed to meet these standards, we took steps to ensure that we were building a culture of 10,000 percent compliance, with 100 percent of our employees complying 100 percent.” To reduce its liability, Koch has also unwound its pipeline business, from 37,000 miles in the late 1990s to about 4,000 miles. Of the much smaller operation, he adds, “Koch’s pipeline practice and operations today are the best in the industry.”

By the time the case came to trial, however, George W. Bush was in office as president, and the indictment had been significantly reduced so that Koch faced charges on only seven counts. The company pleaded guilty to a single felony count for covering up the fact that it had disconnected a key pollution-control device. The company received five years’ probation.

Despite skirting stiffer criminal prosecution, Koch had to pay $20 million in fines and reparations.

Wolf D. Fuhrig of Jacksonville has a doctorate in public law and government from Columbia University in New York City.