Also see: "Stephen Harper. The RCMP. The Movement Towards A Fascist State In Canada"

Who is the real Stephen Harper?

Back in July, I posted about Canada's Prime Minister, Stephen Harper. In that posting, I linked to this speech that he gave to a meeting of the American [religious far-right]  Council for National Policy back in 1997 when he was the Vice President of the National Citizens' Coalition  (NCC). For those of you that aren't aware, Mr. Harper was Vice President of the NCC from the day after he quit his job as a Reform Party MP in June 1997, until he was appointed President from 1998 until 2001 when he ran as a candidate for the leadership of the Alliance Party of Canada. The National Citizens 'Coalition is a right-leaning, non-partisan Canadian think-tank that has as its motto "For more freedom through less government". We'll get back to that later.

Thanks to a link forwarded to me by a commenter, I would like to add further information to Canadian's confusion about just who their Prime Minister is and what he really thinks. Remember, this is the Stephen Harper without his political handlers, his talking points and his personal agenda. On May 24th, 1995, Stephen Harper, a newly minted Reform Party MP, gave this speech at a National Citizens' Coalition dinner at the Hamilton Golf and Country Club in Ancaster, Ontario. The contents of the speech can be found on David Orchard's website where a .pdf copy of the NCC's Consensus newsletter from June 1995 can be found. At the end of the speech, the floor was opened to questions from the audience and while not recorded verbatim, Mr. Harper's answers to the questions posed are reported after the contents of the speech. In his speech, Mr. Harper makes quite a number of references to the "Quebec question" and to the role of "big government" and how they are interconnected. Before I post excerpts from Mr. Harper's speech, it is important that we understand that on May 24th, 1995 Mr. Harper was 36 years old. This is not a speech given from the "misguided passion of youth". This was not a Bill Clinton "I didn't inhale" moment. This was a passionate speech given by a man who was born in Toronto, Ontario, that most Upper Canadian of all of Ontario's cities, a man who was transplanted to Alberta during the "Eastern Creeps and Bums" era and a man that, during the elections of 2004 and 2006, reminded Canadians that he had deep roots in Atlantic Canada after insulting their "culture of defeatism" in 2002. Here is a direct quote from his speech: 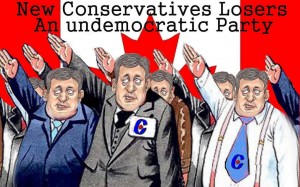 "The National Citizens' Coalition speaks of "more freedom through less government" - that has been your slogan for some time. Let me bring this perspective, which may be unusual coming from a Member of Parliament. Whether Canada ends up as one national government or two national governments or several national governments, or some other king (sic) of arrangement is, quite frankly, secondary in my opinion. What matters and should matter to politicians and people who believe in the kind of values that I believe that National Citizens' Coalition and the Reform Party share is not whether the Canadian state prospers, but whether the Canadian people and the land we call Canada prosper. It's the people, and whether the people who live on the land remain free (that is important). And whether Canada ends up with one national government or two governments or ten governments, the Canadian people will require less government no matter what the constitutional status or arrangement of any future country may be." (my bold)

Let me repeat that. "Whether Canada ends up as one national government or two national governments or several national governments, or some other kind of arrangement is, quite frankly, secondary in my opinion." Don't you find it interesting to hear the future Prime Minister of ALL of Canada talking about the splitting of Canada's central government into a multiple of nationalistic fractions? We're not just talking Quebec and the rest of Canada here, we're talking about the end of the Confederation of the provinces. We're talking about going back to 1866. But, I guess we have to remember that this is the same Stephen Harper who signed a letter as the President of the NCC advising Alberta's Premier Ralph Klein to build a firewall around the province of Alberta to keep the meddlesome Federal government at bay. Let's put Mr. Harper's comments into a larger context. Can you imagine what would happen in the 2012 Presidential election in the United States should the mainstream media unearth a speech given by one of the Presidential candidates where that candidate wrote about the dismantling of the Federal government in favour of complete control by each state or a coalition of states? Americans pride themselves greatly in their federation and it works well. A President who did not believe in the federation of the states should, in my opinion, not run for President at all. I'm certain that most American voters would believe that as well. While I find it easy to be critical of the multi-nation government aspect of Mr. Harper's speech, one cannot argue with his point about Canadians requiring less government no matter the ultimate form of Canada. Let's look at the Harper government's record on "less government". While I realize that the number of Ministers is not necessarily reflective of the size of government, it speaks to the culture within that government. In Mr. Harper's first government way back in 2007, he appointed 26 Ministers. After his mini-shuffle in January 2011, there were 37 Ministers and Ministers of State. By comparison, at one point the Liberal Chretien government had 36 Ministers but (and that's an important but), Mr. Chretien never campaigned on a "less government" platform. I don't think that there are many Canadians that would call a 42 percent increase in the number of Ministers "less government". Let's now go to the question and answer portion of the evening. I quote once again from the article in the Consensus:

"Stephen Harper answered a number of questions after his remarks. One sought his impression of Alberta Premier Ralph Klein's programme for debt reduction: Although I can't speak of the details because it is not my area of expertise, what Mr. Klein is doing in Alberta is, in principle, what governments need to do. He is taking a look at a situation that is unsustainable financially and he is taking the steps necessary through expenditure reductions to eliminate that financial uncertainty on a permanent basis within the life of a single Parliament. That is the only way it ever gets done. Any politician who says he is going to do it over two Parliaments is never going to do it. That's the golden rule. That's something that you can learn from Ralph Klein."

Apparently, that's a lesson that has gone unlearned. Let's look at the fiscal record of Mr. Harper's Conservative governments. First, let's take a look back at the Liberal's tenure at the fiscal helm of Canada. Paul Martin, acting as Canada's Minister of Finance between 1993 and 2002 under the Chretien government, managed to bring in five consecutive budget surpluses and erased Canada's $42 billion deficit over a period of four years. Certainly, one can argue that the economy was booming, however, governments of all stripes seem to manage to overspend their revenues no matter how great the economy. From the Harper government's March 2010 Budget, they show estimated budget deficits ranging from $49.2 billion in 2010 - 2011 to $1.8 billion in 2014 - 2015. Here is are two charts showing the numbers: Since the last Canadian election was held in October of 2010, according to Canada's fixed election date legislation, Mr. Harper has to call an election by October 2012. Remember Stephen Harper's words "Any politician who says he is going to do it(eliminate financial uncertainty) over two Parliaments is never going to do it. That's the golden rule." By extension, according to Mr. Harper's Golden Rule, balanced budgets are simply not going to happen during his tenure since it will require more than one "Parliament". In light of his comments in this speech, I have to ask myself why, just over 6 years after he gave this speech, Stephen Harper wanted to be Prime Minister of Canada. From the content of his speech, it is obvious he does not share the vision of Canada where the whole is greater than the sum of its parts, rather, he saw (or sees) the parts as most important and the whole as completely irrelevant. He certainly does not seem to exhibit "unconditional love" for the federation of provinces that, for nearly 150 years, has made Canada what it is today. Perhaps Stephen Harper needs to go back to junior high school and learn the history of the First World War. It was the sacrifices and achievement of Canadian soldiers at the Battle of Vimy Ridge in France that solidified Canada as a nation. The next time Canadians pick up a pencil, hold their noses and mark an "X", they should be asking themselves if the leader of the Party of their choice would have been willing to sacrifice his or her life to protect the freedom of Canada and Canadians.

Stephen Harper's May 24th, 1995 speech to the National Citizens' Coalition is located here.