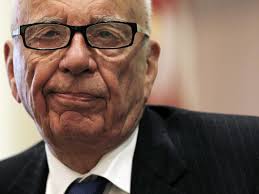 Pointing out four former editors guilty of industrial-scale phone hacking, a British prosecutor said Monday that they “utterly corrupted” Rupert Murdoch’s biggest newspaper. But a recently surfaced secret letter confirms that police suspect the wrongdoing ran all the way to the top of Murdoch’s media empire.

In the May 18, 2012, letter to Murdoch’s lawyer, Scotland Yard informed the billionaire and his henchmen that police were probing whether they were in cahoots with the corruption. The letter, obtained by the Australian Broadcasting Co.’s Four Corners program, was sent six weeks before Murdoch split his company in two — distancing his moneymaking entertainment properties from his print publications.

The probe into whether corporate charges are warranted in the case that has scandalized Fleet St. journalism appears to have been ratcheted up since Andy Coulson, the former editor of Murdoch’s News of the World, was convicted of phone hacking last week. Following Coulson’s verdict, Murdoch was put on notice that Scotland Yard detectives want to interview him as a suspect.

“I know prosecuting authorities in this country and the United States of America are seriously considering bringing charges against members of the board of the U.K. company and the American company, News Corp,” Chris Bryant, a Labour party member of the British Parliament and a phone hacking victim, told Four Corner in a piece broadcast Monday.

The sentencing hearing for Coulson and four others kicked off Monday with a prosecutor branding them as Svengalis of a criminal enterprise.

Coulson and former News of the World newsdesk editors Greg Miskiw, James Weatherup and Neville Thurlbeck sat in the London courtroom dock, all found guilty of phone hacking. They were joined by Glenn Mulcaire, the private investigator hired by the tabloid to tap phones and score news scoops.

“Between them these defendants utterly corrupted this newspaper, which became at the highest level a criminal enterprise,” prosecutor Andrew Edis said in court. “This was systemic misconduct approved and participated in by the editor himself,” he said referring to Coulson, who ran the News of the World from 2003 to 2007.

Coulson headed the tabloid during a “golden period” for hacking, Edis said.

The prosecutor scoffed at initial claims made by Murdoch’s News International that the scandal was limited to a “rogue reporter.”

“Anyone who has ever suggested or believed or was being told that the phone hacking revealed in 2006 and 2007 was the work of a single rogue reporter need only look at the four defendants in the dock,” Edis said. He said the phone hacking was of “industrial scale” with a list of victims that “read like a Who’s Who of Britain in the first five years of this century.”

“Between them the conspirators, hacked phones on many hundreds of occasions and of hundreds of people,” Edis said. “The full extent of the hacking will never be known.”

Defense attorney Gavin Millar had the audacity to counter that Mulcaire thought he was helping the police by hacking the voicemails of Milly Dowler, a 13-year-old girl kidnapped and murdered in 2002.

“He believed he acted with lawful authority in intercepting the answerphone of Milly Dowler with the full knowledge and authority of the police,” Millar said in court. “He believed he had been appointed lead eye, and was proud to be so highly regarded by his taskers and the police.”

Coulson — who became British Prime Minister David Cameron’s communications director after leaving News of the World — and his co-defendants are to be sentenced Friday. They each face two years in jail.

Edis revealed Coulson would be retried on charges he bribed police for royal phone directories — a count on which the jury was deadlocked.

Edis said officials were mulling whether to force Coulson to reimburse taxpayers for the $1.3 million spent on prosecuting the case.

Rebekah Brooks, the former CEO of News International who ran News of the World from 2000 to 2003, was acquitted last week of all charges connected to the phone hacking scandal.

Books by Alex Constantine: “The Covert War Against Rock” & “Terror on the Right” (Excerpts)
Jul 02