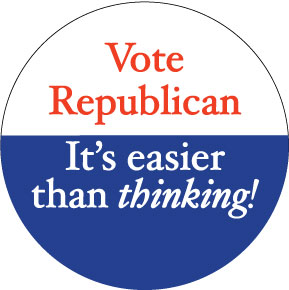 Pardon me. I'm still reeling from the gut-punch stupidity of some members of the GOP. If they can't get away from antiquated, racist and race-based statements, they have no future as a national party.

The latest explosion emanated from the largely unknown Rep. Lynn Jenkins of Kansas while at a town hall meeting in her home district last week. According to ThinkProgress, Jenkins was trying to offer encouragement to conservative activists by saying there were some "really sharp" young Republicans in the House.

Republicans are struggling right now to find the great white hope, said Jenkins. "I suggest to any of you who are concerned about that, who are Republican, there are some great young Republican minds in Washington." Jenkins proceeded to name three GOP members of Congress who are all white—Rep. Eric Cantor (R-VA), Rep. Kevin McCarthy (R-CA), and Rep. Paul Ryan (R-WI).

A Jenkins spokeswoman told the Topeka Capitol-Journal that "the congresswoman wanted to apologize for her word choice and to emphasize she had no intention of expressing herself in an offensive manner." "There may be some misunderstanding there when she talked about the great white hope," said spokeswoman Mary Geiger. "What she meant by it is they have a bright future. They're bright lights within the party."