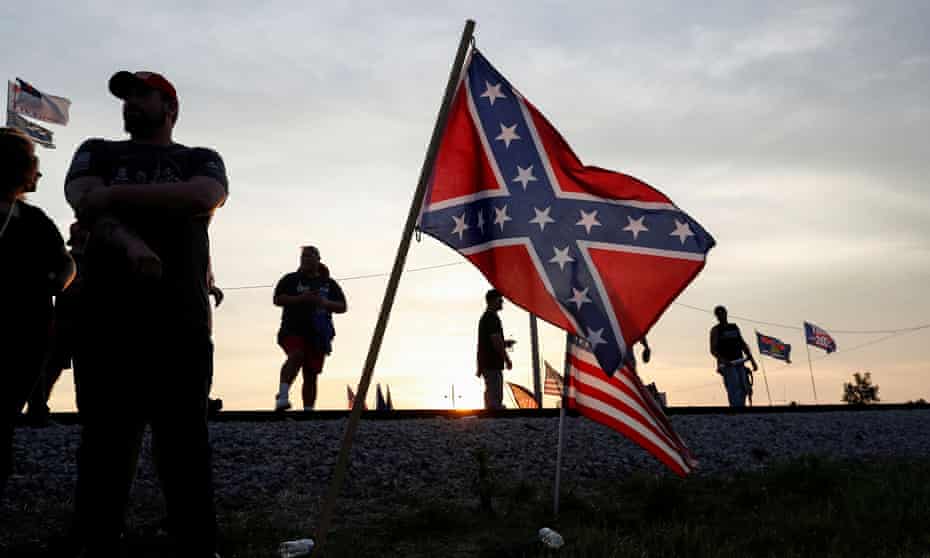 But alongside these members are others who participated in and committed acts of violence at the 2017 Unite the Right rally in Charlottesville, Virginia, and others who hold overlapping membership inviolent neo-Confederate groupssuch as the League of the South (LoS).

The group, organized as a federation of state chapters, has recently made news for increasingly aggressive campaigns against the removal of Confederate monuments. This has included legal action against states and cities, the flying of giant Confederate battle flags near public roadways, and Confederate flag flyovers at Nascar races.

Last Monday, theGeorgiadivision of SCV commenced legal action against the city of Decatur with the aim of restoring a Confederate memorial obelisk which was removed in June 2020, and later replaced with a statue of the late congressman and civil rights activist John Lewis.

Last year, in a widely criticized move, the University of North Carolina’s board of governors proposed creating a $2.5m charitable trust which would pay the state’s SCV organization to maintain a Confederate “Silent Sam” statue which had been removed from the campus.

That deal fell apart in recent weeks. But critics – including former members – alleged that the SCV commander for the state, Kevin Stone, associated with extremists and other “scary” individuals who had been recruited to the group.

Stone, who who also co-founded the SCV Mechanized Cavalry, a motorcycle club associated with the SCV, reportedly led a takeover of the branch which pushed out anti-racist members.

Jalane Schmidt, a professor of religion at the University ofVirginiain Charlottesville, has been active in the campaign to remove the statues that the Unite the Right rally sought to defend in 2017, and is working on a book about the history of neo-Confederate groups including SCV inVirginia.

In a telephone conversation, she pointed to an 1 April ruling of the Virginia supreme court which reversed lower court rulings in favor of the Sons of Confederate Veterans and the Monument Fund in their quest to ensure Charlottesville’s monuments stayed in place.

“According to the supreme court, the SCV and the Monument Fund were wrong all along, and we could have taken down our statues in 2017,” she said.

Instead, the statues were still standing when Unite the Right was organized. As a result of the rally, Schmidt added: “People are dead.”

SCV’s attempts to preserve Confederate monuments have become more difficult in the face of intensifying demands for their removal since the rise of the anti-racistBlack Lives Matter movement, and the neo-Confederate-inspired mass murder of Black church-goers by Dylann Roof in South Carolina in 2015.

The national membership data was provided to the Guardian by a self-described hacktivist whose identity has been withheld for their safety.

They noticed that the organization’s website had been misconfigured, allowing access to membership rolls, recruiting data, and other information about the internal workings of the group. The website has had the security issue for a number of years, according to the hacktivist.

The membership data shows members’ names, addresses, telephone numbers, whether they are active or not, and their email addresses.

The Guardian identified members who were listed as active, and whose contact information included addresses associated with government agencies, the armed forces, educational institutions, and non-government organizations.

There was some previous reporting on an earlier version of the membership database, made public by Atlanta Antifa, which noted the presence of Georgia state legislators in the group’s data.

But the Guardian has found additional legislators, and active members who are in positions of influence and responsibility that stretch far beyond the walls of state legislatures.

One member listed as active in the data is Scott Wyatt, who represents the 97th district in Virginia’s house of delegates, which comprises rural counties north of Richmond, which served as the Confederate capital for much of the civil war.

Duane AJ Probst, who was elected coroner of Osage county, Missouri in 2020, after reaching the rank of Lt Col in the US Army National Guard, is also listed as an active member of the group.

In a telephone conversation, Probst confirmed his membership, saying that he had joined in the last “four or five years” after he discovered a relative had fought for the Confederacy, had attended meetings until around two years ago when he became too busy for regular attendance.

He said that in his experience of the local group in Missouri, it was “a friendly organization that doesn’t advocate white supremacy”, and the main activities he had been involved in were dinners and lectures.

On the question of statues, Probst said that “the men who forged the country were flawed”, and that “I don’t know that taking down a statue is going to ameliorate any issues”, adding that he was not opposed to adding plaques to monuments since “perspectives change as time goes on”.

On the presence of extremists in SCV, Probst said he had never encountered any, but that “it doesn’t surprise me. There are militant members of every organization.”

Probst, who ran for coroner as a Republican, added that: “I am a member of a political faction in this country. There are members of that faction who are loony in my opinion. That doesn’t mean I have to walk away from the organization. Instead I fight for the values I think it represents.”

Another member of the group who is listed as active, Dr Danny W Davis, is both a professor and program director at Texas A&M University and a training consultant to the US army reserve. His membership data includes a US army contact email address.

Davis states on his publicly available CV that he has “Department of Defense Secret Security Clearance”, that he is a “Training Consultant to US Army Reserve, San Antonio, Texas”, and the “Director, Certificate in Homeland Security Program”.

Davis’s CV includes details of courses Davis has taught and developed, including “Domestic Terrorism: The Internal Threat to America”, which is described as “a comprehensive survey of domestic terrorism”. The CV also points to Davis’s 20-year military career, which ended in 1997 with Davis a lieutenant colonel.

In a telephone conversation, Davis confirmed his active membership in the group, saying that he had joined because he had “three great grandfathers” who had fought for the Confederate army.

On the question of statues he said that “when we start taking down monuments, I think that’s wrong”, and that to him they “represent men who were fighting for something they believed in”.

Davis said that those beliefs “included slavery, but not only slavery”, adding: “Do I think the right outcome came out of the civil war? Yes.”

Davis said “I am not a white supremacist” and said he was surprised to hear about the overlap between the group and extremist organizations, saying that members were mostly “re-enactors”, “people like me who are interested in history”, and “military veterans”.

He said that he includes rightwing extremists in his graduate courses on domestic terrorism, and that he is currently revising a course to include the 6 January assault on the US Capitol, as well as the activities of “Antifa and BLM in the north-west”.

A number of members listed as active members use email addresses associated with the Citadel, a public military academy located in Charleston, South Carolina.

A total of 13 members using Citadel or Citadel alumni email addresses appear in the membership database, with six listed as active members.

One of those active members is retired National Guard Brig Gen Roger Clifton Poole, who has twice served as interim president of the college, and remains a professor in The Citadel’s School of Business.

Wyatt and Poole did not immediately respond to requests for comment.

Alongside these SCV members, however, are others who have overlapping membership in more explicitly racist or violent groups, or who have been involved in political violence at events like Unite the Right, the event where Heather Heyer was murdered by white supremacist James Fields in 2017.

They include North Carolina lawyer, Harold Crews, who is listed as an active member of the SCV. Crews is also a member of the League of the South, and marched with the group at Unite the Right in 2017.

Crews was involved in scuffles with counter-protesters on the day. Later, backed by a disinformation campaign pushed by white nationalist blogger, Brad Griffin, who was then LoS’s public relations officer,Crews persuaded a judge to issue a warrantfor the arrest of DeAndre Harris, who was badly beaten in a parking garage by six Unite the Right attendees.

While the public positions of SCV emphasize the preservation of Confederate “heritage”, LoS is an openly secessionist group which seeks to separate the states which joined the confederacy as a new white supremacist state. Crews served as the North Carolina chair of LoS, and hosted a podcast called Southern Nationalist Radio, where his guests included LoS founder Michael Hill.

Other active members who attended Unite the Right include Virginian, George Randall, and North Carolina based James Shillinglaw. On the day of the rally, Shillinglaw was captured on video beating a counter-protester with a flagpole.

According to the Southern Poverty Law Center, Randall and Shillinglaw are also LoS members.

Also on the membership rolls, but listed as currently inactive, is long time Georgia-based far-right activist Chester Doles. Doles, a former Klansman and member of the neo-Nazi National Alliance who marched at Unite The Right with the Hammerskins white power gang, was pictured in 2013 wearing the insignia of the SCV Motorized Cavalry, a motorcycle club made up of members of SCV.

Doles was apparently a member of the group long after he was imprisoned first in Maryland in 1993 for beating a black man, and later for weapons charges in Georgia.

Crews, Doles, Randall, and Shillinglaw did not immediately respond to requests for comment.

This article was amended on 28 June 2021 to remove an incorrect statement that Decatur is a majority-black city; and to refer to Nathan Bedford Forrest by his full name.
Login
0 Comments