"Georgia House Speaker Glenn Richardson wants you to believe that he recently attempted suicide because he suffers from 'depression.' But the reality is that Richardson is facing financial ruin — and that’s the real reason he tried to kill himself. Don’t let Glenn Richardson’s lies fool you. ... "

Richardson, in a statement to the media, said he has been suffering from depression for the past two-and-a-half years since separating and subsequently divorcing his wife.

“While depression often seems to be resolved on occasion, when personal trials or tribulations arise, it flares back up,” Richardson said in the statement. “That is what occurred with me. My depression became so severe that I took substantial steps to do harm to myself and to take my own life. I am thankful that because of medical intervention I have instead been able to now receive help and support.”

And the reactions are already forthcoming. From the American Foundation for Suicide Prevention:

“We are encouraged by Speaker of the House Glenn Richardson’s willingness to speak out about his battle with depression. We hope his courage will bring much needed awareness to this public health crisis,” said Christina Owens, area director for the American Foundation for Suicide Prevention, Metro Atlanta.
“Unfortunately, suicide and mental disorders such as depression are surrounded by stigma and misconceptions which prevent many people from seeking the help they desperately need.”

And from Richardson himself, via the AJC’s Galloway:

“As you know, in an effort to protect my family, I have and will continue to have a practice that I do not discuss my personal and private life. However, in this situation, I feel compelled to speak out in order to possibly help others. For the past two and a half years, ever since my separation and divorce, I have struggled with the disease of depression. Depression is a disease which affects millions of people everyday in this country. Like most people who suffer from depression, I regularly see a physician and take prescription medications.”

http://blogs.creativeloafing.com/freshloaf/2009/11/13/speaker-glenn-richardson-recently-attempted-suicide/
------
A Pipeline to Marital Problems

" ... Richardson has remained silent on his personal life after ethics allegations surfaced that he had had an 'inappropriate relationship' with a female utility lobbyist in 2007. A complaint from Georgia Democrats charged the relationship took place at the same time Richardson was co-sponsoring a bill that would have authorized a $300 million pipeline being sought by her employer. ... " 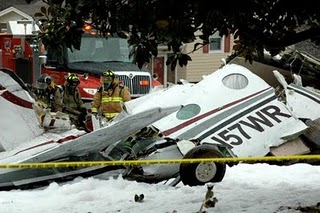 "John Wesley Rakestraw, 50, a developer and close friend of Gov. Perdue who held a fund-raiser at his home for the governor in 2006, was believed to be piloting the plane when it crashed, said John Shelton, director of emergency service in Surry County, N.C. Another of the crash victims, Steve Simpson, 46, a Paulding County developer and friend of the governor and Georgia House of Representatives Speaker Glenn Richardson, also is a licensed pilot.

Others killed on the flight were Frank Ruggiero, 52, of Acworth, a project manager for Facility Program Management Inc., of Smyrna, which is building the new Paulding County courthouse; Tony Gunter, 46, of Acworth, who worked for Rakestraw's Dallas construction company, Raker Construction; and Robert Butler, 49, of Chamblee, who worked for the Georgia Bank in Powder Springs. The men had planned to fly to Mount Airy and drive to Primland, a hunting and golf resort in Meadows of Dan, Va., about 25 miles north of the Mount Airy airport. ... "

Glenn Richardson is a Director of Westside Bank in Hiram, GA.

"We know there's corruption in the Georgia State Legislature, but they don't want their families hurt, so they keep it covered up."

"But Senator, what about my family?"

The international Georgia-based company, Facility Group, has offices in Chicago, Los Angeles, Germany and the Netherlands. ... 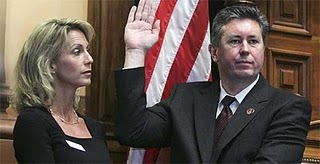 Glenn Richardson in January 2007, when he was sworn in during the first day of the Georgia General Assembly. His wife Susan holds a Bible. (Associated Press)

SHAME OF THE SOUTH

... The state's first Republican Governor since Reconstruction, Sonny Perdue, was elected. This caused the state's money power to flip entirely to the Republicans, who took over both houses of the state legislature in 2004.

And instituted their machine.

The leader of that machine, on the House side, is Glenn Richardson. Like the other leaders of the state's Republicans he lives in the Atlanta exurbs. Specifically he lives in Hiram, Georgia, which is in Paulding County, about 25 miles north-by-northwest from Atlanta proper.

Richardson, 52, lives just a few miles north of his birthplace in Douglas County. He is a highly incurious man who operates from self-interest, his own and that of people like him. He got his law degree from Georgia State in Atlanta in 1984 and almost immediately joined a politically-connected law firm for which he is now a name partner. He rose steadily along with his party, winning his legislative seat in 1996. His district is northeast of that held by the late Democratic Speaker Tom Murphy, and while his leadership style is based on the same ruthlessness and bombast, his method for gaining power is quite different.

The key to Richardson's rule is money. As soon as he became Speaker, in 2005, he put his plan into action.

It's quite simple. State law limits contributions to any candidate to $2,000 for a primary, $2,000 for the general election and $1,000 for a run-off, if that becomes necessary. Richardson began demanding $5,000 up-front from businesses who needed the government's cooperation, payable directly into his campaign account. Later, he started bundling these contributions -- taking multiple $5,000 hits from a company chairman, from each of their family members, and from any other executives who felt they needed to get in, as well as from companies affiliated with the contributor. ...

Richardson's obsession in the legislature involves eliminating taxes on rich white folks and putting more taxes on poor black folks. He is a class warrior. This means limiting the use of property taxes to fund local government and pushing everything on to sales taxes instead. Thanks to local government opposition he failed to pass his sales tax plan, which he dubbed GREAT ...

Who is Glenn Richardson? My home town listeners probably know. He's the Republican Speaker of the Georgia House of Representatives. By the end of this year he will have blood on his hands. Sounds rather strong, doesn't it? Well ... actions have consequences. Read on:

Several years ago, when Georgia passed its mandatory seatbelt law, the esteemed legislators in Atlanta decided to exempt pickups and light trucks. The exemption of light trucks like SUVs was later lifted, but pickup drivers can still drive around without buckling up.

Reporting from Atlanta - Embroiled in a strange and unsavory drama involving a suicide attempt and allegations of an affair with a lobbyist, Georgia's powerful House Speaker Glenn Richardson, a Republican, said Thursday that he would resign.

The announcement by Richardson -- a hard-charging, family-values conservative -- came amid Republicans' mounting calls for his ouster and fears that a lingering sex and ethics scandal could harm the Georgia GOP in next year's state elections. Richardson will leave office Jan. 1.

The GOP controls both houses of the Legislature, and Republican Gov. Sonny Perdue is completing his second and final term. But next year, every legislator is up for reelection in a shaky economy. And on the Democratic side, Roy Barnes -- who served as governor from 1999 to 2003 and could appeal to moderates -- has declared his intention to run again.

Republicans "could have their whole legislative agenda, not to mention their leadership, done in by a sex scandal," said Tom Crawford, editor of the Georgia Report, an online political news service. "That's not good for any party, but especially bad for a party that here in Georgia has positioned itself as a champion of mainstream family values."

But Jerry Luquire, president of Georgia Christian Coalition, said it was too early to "predict doom" for the party based on one scandal. "I don't see a shower and call it a thunderstorm," said Luquire, who had called on Richardson to step down.

The House speakership is the second most powerful public office in Georgia. After Richardson distinguished himself as minority leader - during which time he pushed for a constitutional ban on same-sex marriage - he helped engineer the 2004 Republican takeover of the House, becoming the first GOP House speaker in Georgia in 134 years. ...

He has also been dogged by talk of scandal since January 2007, when Bobby Kahn, then chairman of the Georgia Democratic Party, filed a complaint with a legislative ethics committee. It accused Richardson of having an affair with a lobbyist with Atlanta Gas Light while he was a co-sponsor of a bill that would have financed a $300-million pipeline for the company.

A committee of two Republicans and one Democrat dismissed the complaint 12 days after it was filed.

Richardson's private life has seen turmoil since. He and his wife, Susan, were divorced in 2008, and the recession has reportedly harmed his law firm and a bank in which he had invested.

On Nov. 8, Richardson shocked Georgians when he attempted, by his own admission, to kill himself by overdosing on pills. His candor about the episode -- and his admitted struggle with depression -- earned him kudos from anti-suicide activists.

But this week, his ex-wife gave an interview to a local TV station, renewing allegations of the affair and producing e-mails that she said proved it. She also alleged that Richardson recently threatened to beat her and have state law enforcement track her down when she went out of town with a new boyfriend.

The suicide attempt, she said, was an effort to win her back -- "to guilt me into doing what he wanted," she said.

Before the House speaker's announcement Thursday, House Minority Leader DuBose Porter, a candidate for governor, said House Democrats were again looking into the possibility that Richardson breached ethics rules. Now, he added, they would look to see whether any crimes were committed.

"What has now been confirmed is what we have suspected for a long time," Porter said. "Everybody around the Capitol knew this was happening. It finally got confirmed by his wife." ...