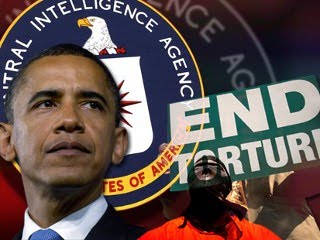 Palestinian security agents who have been detaining and allegedly torturing supporters of the Islamist organisation Hamas in the West Bank have been working closely with the CIA, the Guardian has learned.

Less than a year after Barack Obama signed an executive order that prohibited torture and provided for the lawful interrogation of detainees in US custody, evidence is emerging the CIA is co-operating with security agents whose continuing use of torture has been widely documented by human rights groups.

The relationship between the CIA and the two Palestinian agencies involved – Preventive Security Organisation (PSO) and General Intelligence Service (GI) – is said by some western diplomats and other officials in the region to be so close that the American agency appears to be supervising the Palestinians' work.

One senior western official said: "The [Central Intelligence] Agency consider them as their property, those two Palestinian services." A diplomatic source added that US influence over the agencies was so great they could be considered "an advanced arm of the war on terror".

While the CIA and the Palestinian Authority (PA) deny the US agency controls its Palestinian counterparts, neither denies that they interact closely in the West Bank. Details of that co-operation are emerging as some human rights organisations are beginning to question whether US intelligence agencies may be turning a blind eye to abusive interrogations conducted by other countries' intelligence agencies with whom they are working. According to the Palestinian watchdog al-Haq, human rights in the West Bank and Gaza have "gravely deteriorated due to the spreading violations committed by Palestinian actors" this year.

Most of those held without trial and allegedly tortured in the West Bank have been supporters of Hamas, which won the Palestinian elections in 2006 but is denounced as a terrorist organisation by the PA – which in turn is dominated by the rival Fatah political faction – and by the US and EU. In the Gaza Strip, where Hamas has been in control for more than two years, there have been reports of its forces detaining and torturing Fatah sympathisers in the same way.

The most common complaint is that detainees are severely beaten and subjected to a torture known as shabeh, during which they are shackled and forced to assume painful positions for long periods. There have also been reports of sleep deprivation, and of large numbers of detainees being crammed into small cells to prevent rest. Instead of being brought before civilian courts, almost all the detainees enter a system of military justice under which they need not be brought before a court for six months.

According to PA officials, between 400 and 500 Hamas sympathisers are held by the PSO and GI.

Some of the mistreatment has been so severe that at least three detainees have died in custody this year. The most recent was Haitham Amr, a 33-year-old nurse and Hamas supporter from Hebron who died four days after he was detained by GI officials last June. Extensive bruising around his kidneys suggested he had been beaten to death. Among those who died in GI custody last year was Majid al-Barghuti, 42, an imam at a village near Ramallah.

While there is no evidence that the CIA has been commissioning such mistreatment, human rights activists say it would end promptly if US pressure was brought to bear on the Palestinian authorities.

Shawan Jabarin, general director of al-Haq, said: "The Americans could stop it any time. All they would have to do is go to [prime minister] Salam Fayyad and tell him they were making it an issue.. Then they could deal with the specifics: they could tell him that detainees needed to be brought promptly before the courts."

A diplomat in the region said "at the very least" US intelligence officers were aware of the torture and not doing enough to stop it. He added: "There are a number of questions for the US administration: what is their objective, what are their rules of engagement? Do they train the GI and PSO according to the manual which was established by the previous administration, including water-boarding? Are they in control, or are they just witnessing?"

Sa'id Abu-Ali, the PA's interior minister, accepted detainees had been tortured and some had died, but said such abuses had not been official policy and steps were being taken to prevent them. He said such abuses "happen in every country in the world". Abu-Ali sought initially to deny the CIA was "deeply involved" with the two Palestinian intelligence agencies responsible for the torture of Hamas sympathisers, but then conceded that links did exist. "There is a connection, but there is no supervision by the Americans," he said. "It is solely a Palestinian affair. But the Americans help us."

The CIA does not deny working with the PSO and GI in the West Bank, although it will not say what use it has made of intelligence extracted during the interrogation of Hamas supporters. But it denies turning what one official described as "a Nelson's eye to abuse".

The CIA's spokesman, Paul Gimigliano, denied it played a supervisory role over the PSO or GI. "The notion that this agency somehow runs other intelligence services … is simply wrong," he said. "The CIA … only supports, and is interested in, lawful methods that produce sound intelligence."

Concern about detainee abuse is growing in the West Bank despite an effort by the international community to create Palestinian institutions that will guarantee greater security as a first step towards creating a Palestinian state. More than half of the PA's $2.8bn (£1.66bn) budget came from international donors last year; more than a quarter was swallowed up by the ministry of the interior and national security. Human Rights Watch and al-Haq have said that in raising the security capacity of the PA, donor countries have a responsibility to ensure it observes international human rights standards.

At the heart of the international effort is the creation of the Palestinian national security force, a 7,500-strong gendarmerie trained by US, British, Canadian and Turkish army officers under the command of a US general, Keith Dayton. Many Palestinians blame Dayton for the mistreatment of Hamas sympathisers, although the general's remit does not extend to either of the intelligence agencies responsible.

Some in Dayton's team are said to have been warned by senior CIA officers that they should not attempt to interfere in the work of the PSO or GI. Privately, some of them are said to fear that the mistreatment of detainees, and the anger this is arousing among the population, may undermine their mission. One source said: "I know that Dayton and his crew are very concerned about what is happening in those detention centres because they know it can jeopardise their work."