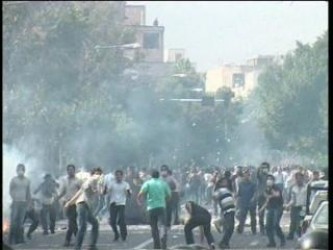 Letter to the Toronto Star

Re: Dark days in Honduras

The attempt by President Manuel Zelaya of Honduras to use the resources of the state to facilitate economic and social opportunities for workers, the poor and the rural population cannot help but be divisive in a society that has historically privileged the needs and interests of its dominant members.

The attempt by President Manuel Zelaya of Honduras to use the resources of the state to facilitate economic and social opportunities for workers, the poor and the rural population cannot help but be divisive in a society that has historically privileged the needs and interests of its dominant members.

However, the push back from the military, the political elite and business sector to Zelaya’s policy initiatives such as a minimum wage increase and nationalization of energy and telecommunication sectors should not cause hesitation in addressing the social, economic and political inequalities in Honduran and Latin American society.

The attack on the democratic process in Honduras is an act of class warfare by the privileged. The non-binding plebiscite is a mere pretext to stop the people from setting the country’s priorities.

Political populism is not the problem. The problem is the fear of bringing the unwashed masses as central actors into the drama of national development in Honduras, and even in Canada.

Romeo Vasquez led the military coup in Honduras Sunday. Vasquez is a graduate of the U.S. military training facility at Fort Benning, Georgia, School of the Americas (SOA) now “WHINSEC,” according to SOA Watch.

US Latino immigrants know the suffering in Honduras

Most Latinos or poeple of Latino descent sougnt refuge in the U.S. to escape oppression partially caused by U.S. foreign policiy. For example, forty-seven percent of Los Angeles residents are Latino or of Latino origin. Most sought refuge in the City of Angels and other American cities due to their experiencing human rights violations in their homelands: as unfair trade, military coups, torture and assassinations of friends or family members.

This seldom recognized history of the wave of immigrants on the U.S. southern border and root causes are provided in a short, animated Cannibol.com video, Borders.

In opposition to peace, justice and rule of law, Honduran military kidnapped the Chavez-style, democratically elected president, Manuel Zelaya and took him to the air force base just hours before he was to hold a referendum that would have enabled extending his term in office.

Zelaya flew to neighboring Costa Rica for political asylum. According to Zelaya speaking on Telesur from San Jose, Costa Rica, the soldiers fired guns and threatened to kill Zelaya if he resisted.

The military applied Electronic Warfare tactics on Hondurans, cutting Honduran state television, electricity in the capital, Tegucigalpa, telephones, cellphones and internet access to halt communications in and out. The military took over Government institutions.

Ignoring “stay-home” warnings, hundreds of Zelaya and democracy supporters flooded onto streets of Tegucigalpa shouting, “We want Mel!” (Mel is the president’s nickname.) Some protesters lay down in the streets to prevent military vehicles from passing, according to AFP.

After days of mounting pressure, Zelaya had told an El Pais reporter that “unknown people from the US government” had “made some phone calls” and that “”If I’m sitting here today in the President’s office, it’s thanks to the U.S.” This begs the question: Is the fact that Zelaya is not in the Honduran President’s office today due to the U.S.?

Americans paying for coups, kidnaps and torturing the poor

“The U.S. Army School of the Americas…is a school that has run more dictators than any other school in the history of the world,” according to U.S. Congressman Joseph Kennedy. SOA Watch reports that SOA produced at least eleven Latin American dictators.

US government is paying scholarships to soldiers from South and Central Americans to learn to “torture and oppress its own people,” according to the documentary, On The Line, featuring work of SOA Watch.

SOA Watch has been a forceful education leader in the field of human rights and working towards accountability of US DoD SOA graduates. According to the human rights group, SOA graduates have suppressed Latin American democracy through persecution, torture, assassinations and military coups highlighted in The Real News video, Past is Present in Latin America.

SOA human rights violations and its breach of international law are nothing new to Hondurans. SOA Watch reported that “Honduras’s first-hand experience with bloody work of School of the Americas graduates and SOA trained military dictators” include:

From 1980-1982 SOA graduate, Policarpo Paz Garcia headed the dictatorial Honduran regime and intensified repression and murder by Battalion 3-16, one of the most feared of all Latin America death squads.

Honduran SOA graduates, with help of Argentine SOA graduates, founded Battalion 3-16.
José Valle, SOA graduate, admitted torturer, member of Battalion 316 stated, “[I took] a course in intelligence at the School of the Americas [in which I saw] a lot of videos which showed the type of interrogation and torture they used in Vietnam. Although many people refuse to accept it, all this is organized by the U.S. government,” highlighted in the PBS video, Inside the School of Assassins.

Costa Rica President is calling for international solidarity for Honduran democracy. European Union called for Zelaya’s release. President Obama said he was deeply concerned, requested Hondurans to “respect democratic norms,” and has validated that Zelaya is still the country’s president.