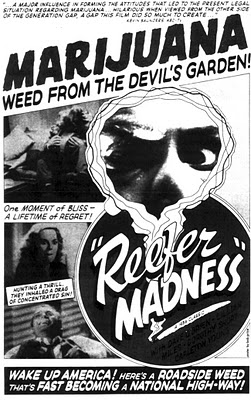 “… The nation’s top anti-drug official said people need to overcome their ‘reefer blindness’ and see that illicit marijuana gardens are a terrorist threat to the public’s health and safety, as well as to the environment. …”

The news: The nation’s drug czar says pot garden growers in the north state are terrorists. What’s next: Anti-drug agencies plan to continue the blitz on gardens next week.

The nation’s top anti-drug official said people need to overcome their “reefer blindness” and see that illicit marijuana gardens are a terrorist threat to the public’s health and safety, as well as to the environment.

John P. Walters, President Bush’s drug czar, said the people who plant and tend the gardens are terrorists who wouldn’t hesitate to help other terrorists get into the country with the aim of causing mass casualties. Walters made the comments at a Thursday press conference that provided an update on the “Operation Alesia” marijuana-eradication effort.

“Don’t buy drugs. They fund violence and terror,” he said.

After touring gardens raided this week in Shasta County, Walters said the officers who are destroying the gardens are performing hard, dangerous work in rough terrain. He said growers have been known to have weapons, including assault rifles.

“These people are armed; they’re dangerous,” he said. He called them “violent criminal terrorists.”

Walters, whose official title is director of the White House Office of National Drug Control Policy, said too many people write off marijuana as harmless. “We have kind of a reefer blindness,’ ” he said.

No arrests have been made so far in the four days of raids, the opening leg of what Shasta County Sheriff Tom Bosenko has promised will be at least two straight weeks of daily raids.

He said suspects have been hard to find because their familiarity with their terrain makes it easy for them to flee quickly.

Although crews doing the raids are using Black Hawk and other helicopters to drop in on some of the gardens, Bosenko said they don’t want to give the growers any warning of a raid.

“We try to move in under stealth,” he said.

As of Thursday morning, Operation Alesia raids had resulted in the yanking of 68,237 young marijuana plants from public lands in Shasta County. Raids already have been conducted in Whiskeytown National Recreation Area, as well as on land managed by the U.S. Forest Service north of Lake Shasta and other public land near Manton.

The operation is being led by the sheriff’s office and has involved 17 agencies, including the California National Guard and the U.S. Drug Enforcement Administration. It’s believed to be the largest campaign of its kind in the state, Bosenko said.

The operation is named after the last major battle between the Roman Empire and the Gauls in 52 B.C. That battle was won by the Romans.

With the blitz of marijuana gardens around Shasta County, Bosenko said officials hope to not only get rid of the pot, but also win back the land for the public that owns it.

“These organizations are destroying our lands and wildlife,” he said.

“These lands must be cleaned and restored,” he said.

His estimate is based on a National Park Service study that found it costs $11,000 per acre to pull the plants, clear irrigation systems, reshape any terracing and replant native vegetation, said Mike Odle, Forest Service spokesman.

While Walters didn’t give specific goals for Operation Alesia, he said anti-drug agencies aim to cripple the organized crime groups that he said are behind the marijuana cultivation.

“This business we intend to put into recession, depression and put its leaders into jail,” Walters said.

Reporter Dylan Darling can be reached at 225-8266 or at ddarling@redding.com.

Previous Article
Wall Street & the Mafia
Next Article
The Plame Indictments that Never Surfaced – Who was Yanking the Chains of Jason Leopold and Wayne Madsen?

The Plame Indictments that Never Surfaced – Who was Yanking the Chains of Jason Leopold and Wayne Madsen?
Jul 15