Book Review: The Dark Side, by Jane Mayer 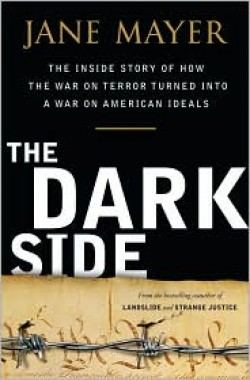 An inside look at how the Bush administration developed its policy on torture and how it clashed with deeply held American ideals.

“The greatest dangers to liberty lurk in the insidious encroachment by men of zeal, well-meaning but without understanding.”

Justice Louis Brandeis wrote those lines 80 years ago, but as Jane Mayer’s brilliantly reported and deeply disturbing new book, The Dark Side: The Inside Story of How the War on Terror Turned Into a War on American Ideals, more than amply illustrates, they’ve never been more relevant.

In fact, if you intend to vote in November and read only one book between now and then, this should be it. By and large, Mayer does not add any strikingly new information to what attentive readers already will know about Bush/Cheney’s adoption of torture as an instrument of American state power and of how the Central Intelligence Agency, its international accomplices and the U.S. military constructed what amounts to an American gulag to further that end. Mayer’s singular accomplishment is to fuse the years of events that have brought us to this pass into a single compelling narrative and to use her own considerable reportorial powers to fill in important connective and contextual events.

For example, what Mayer makes abundantly clear is how much more perilous the domestic situation might have become had there not been the modest degree of push back the White House has received from Congress and other rather courageous members of the executive branch. Former Sen. Majority Leader Tom Daschle (D-S.D.), for example, tells Mayer how George W. Bush’s then-White House Counsel Alberto Gonzales sought a last-minute congressional resolution that “would give President Bush the authority to round up American citizens as enemy combatants, potentially stripping them of their civil liberties.”

As Daschle subsequently learned, the White House was relying on opinions from John Yoo and other authoritarian ideologues in the Office of Legal Counsel who secretly told the president and vice president that they enjoyed inherent powers to overturn any law restraining surveillance, searches and seizures within the United States. As one such memo said, “The government may be justified in taking measures which in less troubled conditions could be seen as infringements of individual liberties. We think that the Fourth Amendment should be no more relevant than it would be in cases of invasion or insurrection.”

Mayer does a superb job of describing how the trauma of 9/11 all but unhinged Bush and Cheney and predisposed the chief executive to embrace the ready-made unitary executive theory of presidential power, which the vice president and his chief aide, David Addington, had come to Washington prepared to promote. In the opinion of the late historian Arthur Schlesinger, “the Bush administration’s extralegal counterterrorism program presented the most dramatic, sustained and radical challenge to the rule of law in American history.”

Such appraisals range across the ideological spectrum. Walter Dellinger, who served as Bill Clinton’s solicitor general and now teaches constitutional law at Duke University, describes the Bush administration’s arguments concerning inherent powers to supersede existing laws on domestic and foreign intelligence “insane.” As he told Mayer, “I don’t think anyone has ever taken the theory of presidential power and distorted it this way. Is it conservative? It’s a particular brand of conservatism. It has nothing to do with respect for tradition. In it is the embodiment of power for the executive, it’s like Mussolini in 1930.”

Richard Shiffrin, a career government lawyer who oversaw the legality of National Security Agency surveillance activities for the Pentagon, initially was denied access to Yoo’s legal memos on — of all counts — national security grounds. (The NSA is the most sensitive of all U.S. intelligence agencies.) As Mayer reports, Shiffrin understood why when he finally saw Yoo’s now infamous memos. “A high school student could have done better,” he said.

Jack Goldsmith, the deeply conservative lawyer and onetime academic colleague to Yoo, enjoyed a short tenure as head of the Office of Legal Counsel — the president’s private lawyer — during which he overturned most of Yoo’s work, to the disgust of Addington and Cheney. Subsequently forced to resign out of principle, Goldsmith wrote that the White House dealt with restrictions on its ability to conduct domestic spying “the way they dealt with other laws they didn’t like: They blew through them in secret based on flimsy legal opinions that they guarded closely so no one could question the legal basis for the operations. . . . ”

The consequences of all this have been documented in an array of newspaper and magazine reports, particularly in Dana Priest’s Pulitzer Prize-winning reportage for the Washington Post. Still, Mayer does invaluable work locking these reports into a coherent narrative framework and sketching in vital connective details and insights. One of the things most striking in her account is the number of intelligence and law enforcement officials, particularly from the FBI, who opposed the adoption of torture as a matter of state policy, warning that what the White House was demanding violated both U.S. and international law: They simply refused to go along. For example, in her extremely well-reconstructed account of the handling of Abu Zubaydah, the first major al Qaeda figure to fall into U.S. hands, Mayer demonstrates how FBI interrogators initially secured his cooperation through conventional techniques, and then were forced to abandon the process to CIA questioners bent on using torture. The torment of Abu Zubaydah not only yielded no further useful information, but subsequently has been secretly deemed a war crime by the International Red Cross. In the case of another so-called “high-value detainee” — Sheikh ibn al-Libi — torture produced a torrent of false information used to buttress the case the White House made to Congress to justify the invasion of Iraq.

Meanwhile, that same secret Red Cross report concluded that the interrogation methods used on al Qaeda prisoners across the board by the CIA constituted war crimes that are prosecutable under a variety of international treaties and conventions. This came, according to Mayer, as a CIA analyst concluded that at least a third of the detainees at Guantanamo Bay — many of whom have been tortured — are innocent of any involvement in terrorism. Military authorities now believe that more than half of the men imprisoned in the Cuban outpost of what now constitutes an American gulag never committed a hostile act against the United States.

Mayer makes this point in one meticulously documented individual case after another — a process that renders her eyebrow-raising subtitle, if anything, an exercise in understatement.

Given the vogue in both parties for faith-based initiatives, the evidence marshaled in The Dark Side makes it well worth considering a proposal in the forthcoming issue of the Jesuit magazine America. In the coming years, the influential intellectual journal writes, “Our country must still come to grips with our national acquiescence to the politics of fear . . . . Among the necessary steps will be restoration of freedom to innocent detainees, accompanied by public apology and some monetary restitution. . . . Furthermore, Congress needs to accept responsibility for its complicity with the executive in laws that denied suspects rightful appeal. A national truth commission should be instituted to establish political accountability for the decisions, policies and statutes that placed suspects outside the protection of the law. . . . A truth commission should not engage in a witch hunt, but make a serious effort to understand the subversion of the rule of law in the post-9/11 panic and to build a barrier of public opinion and professional responsibility to prevent similar failure in the future. If the nation does not make a collective effort to come to grips with the subversion of liberty in the name of security, we will leave ourselves and generations to come vulnerable to still greater violations and silent coups d’état.”

Mayer’s deeply troubling, but splendidly executed book, should be required reading for every nominee to such a commission.

Previous Article
Mind Control: “The Great Battlefield of the Cold War” – Allen Dulles
Next Article
Talking Points on FOX & Friends confirmed beyond reasonable doubt (as if there was really any doubt)