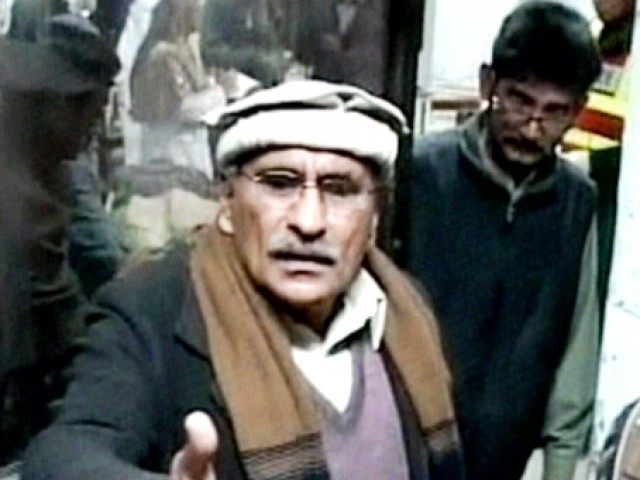 LAHORE: Unidentified people attempted to kill the uncle of Shumaila, the widow who poisoned herself after her husband Faheem was gunned down by US citizen Raymond Davis on Thursday . Shumaila’s uncle Sarwar has been admitted to hospital in critical condition.

According to eye witnesses, three unidentified men jumped over the walls of Sarwar’s house and hit him on the head repeatedly with stones. They also forcefully made him eat pesticide pills.

Neighbours intervened after hearing the noise, but the assailants fled after assaulting the neighbours. Allied Hospital MS Dr Rana Bashir has confirmed that Sarwar’s stomach had been washed and he is now out of danger.

Sarwar’s brother told Express News that some people had threatened Sarwar to withdraw from the Raymond Davis case or they would kill him. He appealed to the Punjab chief minister to provide the family justice. RPO Aftab Cheema said action would be taken against the culprits after investigation. ...

... Sarwar was rushed to Allied Hospital in critical condition where doctors were trying to save his life till early Thursday morning. The brother of Muhammad Sarwar told The Nation that three armed men forced their entry into the house after breaking the windowpane of one of the rooms. When they broke the glass, Muhammad Sarwar came out. The outlaws started beating him up.

The other family members, including women and children, coming out for his rescue, were taken hostage and beaten up. The three outlaws then took everyone hostage at gunpoint and forced poisonous pills down Sarwar’s throat.

“One of the pills was thrown out by Sarwar while he was forced to sallow the others,” family members said. The family members said the gunmen were demanding a patch-up with Raymond Davis, but when “all the family refused, they started torturing us”.

Muhammad Afzal, the brother of Sarwar, said the people of the area, after hearing the screams of the family, gathered on the spot. The three armed men, who were inside the house by then, opened aerial fire and managed to escape. Police reached half an hour after the incident. The people of the area protested against the police’s late arrival. Muhammad Sarwar was admitted to the hospital in critical condition, where doctors said his condition was getting better but “it could not be said about his life as in such cases patients gain senses and sometimes they go back in comma and die”. Heavy police were deployed outside the hospital but no political worker or leader from any political party was seen.

It merits mentioning that when this scribe with Nawa-i-Waqt team was walking through the village of Shumaila Kanwal the other day, Muhammad Sarwar told this scribe that two armed foreigners tortured him and threatened to kill him and all his family members.

He also alleged that the foreigners threatened to bomb all the village if “we didn’t cooperating to get Raymond Davis released”. WAQT TV news broke the news first of all.Shumaila’s uncle forced to take poisonous pills.