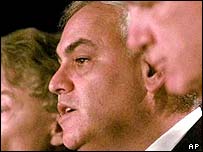 As the brutal crackdown on protesters in Libya continues to unfold, Laura Rozen of Politico takes a look at the American power players who have lobbied on behalf of the Qadhafi regime in recent years.

The most interesting and notable name on the list: Richard Perle, the neoconservative former Bush administration official who is considered one of the godfathers of the war in Iraq.

Rozen reports that Perle traveled to Libya twice in 2006 as a paid adviser of a Boston-based consulting firm, the Monitor Group, and met with Vice President Dick Cheney after the trips. She reports on Monitor's "Project to Enhance the Profile of Libya and Muammar Qadhafi":

But Monitor describes, in a series of documents published by the National Conference of the Libyan Opposition in 2009, an “action plan” to "introduce and bring to Libya a meticulously selected group of independent and objective experts" to travel to Libya, meet senior officials, hold lectures and workshops, and promote the image of Libya and its controversial ruler.

Perle and Monitor did not register with the Justice Department as foreign agents of Libya, as many lobbyists do when representing foreign nations (see, for example, my story on Egypt's lobbyists). It's not clear whether the Foreign Agents Registration Act would apply to Perle's work for Libya.

I've reached out to Perle, who is a resident fellow at the American Enterprise Institute, to ask him about his work in Libya. I will update this post if I hear back.

"... As several Libyan diplomats Monday denounced their country’s four-decade ruler Col. Muammar Qadhafi for unleashing the army against anti-government protesters, U.S. consultancies that have worked to burnish Libya’s and Qadhafi’s U.S. image were laying low.
Several consulting, law and lobbying firms have moved in to advise the Libyan government and energy interests since U.S. sanctions were lifted on Libya in 2004, according to Justice Department records, including Fahmy Hudome International, and White & Case LLP.
The Livingston Group canceled its $360,000-per-year lobbying contract  with the Libyan government as well as one with an associated Qadhafi charity in September 2009, following the hero’s welcome Libyan leaders gave for the convicted Lockerbie bomber upon his release in August 2009 from a Scottish prison on humanitarian grounds.
One of the more unlikely image-mongers that has worked to burnish Qadhafi's and Libya’s image never registered with the Justice Department. Prominent neoconservative Richard Perle, the former Reagan-era Defense Department official and George W. Bush-era chairman of the Defense Policy Board, traveled to Libya twice in 2006 to meet with Qadhafi, and afterward briefed Vice President Dick Cheney on his visits, according to documents released by a Libyan opposition group in 2009.
Perle traveled to Libya as a paid adviser to the Monitor Group, a prestigious Boston-based consulting firm with close ties to leading professors at the Harvard Business School. The firm named Perle a senior adviser in 2006.
The Monitor Group described Perle’s travel to Libya and the recruitment of several other prominent thinkers and former officials to burnish Libya’s and Qadhafi’s image in a series of documents obtained and released by a Libyan opposition group, the National Conference of the Libyan Opposition, in 2009.
The Monitor Group did not return phone calls left at its Boston offices Monday...
A 2007 Monitor memo named among the prominent figures it had recruited to travel to Libya and meet with Qadhafi “as part of the Project to Enhance the Profile of Libya and Muammar Qadhafi” Perle, historian Francis Fukuyama, Princeton Middle East scholar Bernard Lewis, famous Nixon interviewer David Frost, and MIT media lab founder Nicholas Negroponte, the brother of former deputy secretary of state and deputy of national intelligence John Negroponte...
The Monitor group said it was charging the government of Libya $250,000 per month for the project ($3 million per year), plus expenses which were not to exceed $2.5 million, according to a 2006 Monitor group memo to its Libyan client....
A later Monitor memo says the company will assist Libya in the creation of its National Security Council and the training of its employees, continue to help advise and coordinate Libya’s modernization program, continue the cultivation of an elite group of influence makers to help improve Libya’s global image and reputation ..."
http://friday-lunch-club.blogspot.com/2011/02/richard-perle-neocons-recruited-us.html