By Chris Woods
The Bureau of Investigative Journalism | February 18, 2011

President Obama’s covert drone war inside Pakistan is on hold after the arrest of Raymond Davis, a US government employee believed by many to be a secret agent or Special Forces operative, research by the Bureau of Investigative Journalism shows. 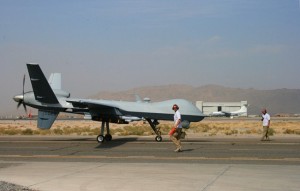 One hundred and eighty lethal US drone strikes have been made inside Pakistan since Barack Obama became president: a deadly attack every four days or so, in a campaign the US continues to publicly deny.

Yet no drone attack has been reported in Pakistan since January 23rd. Not since June 2009 has the drones campaign seen such a long pause – 26 days having passed. Even during Pakistan’s flood crisis of summer 2010, the campaign was suspended for just 20 days.

The unexpected suspension appears to be the result of one man. On January 26th 2011 Raymond Davis gunned down two men in Lahore.  In his initial testimony to police, Davis claimed that the men he killed were thieves, who had brandished a weapon at him at traffic lights. He had, he said, fired in self-defence.

Pakistan media has widely reported that the two men were not robbers, but agents of Pakistan’s intelligence service, the ISI, who were tailing Davis because of his alleged suspicious behaviour.   Davis is said to have been arrested in possession of a sophisticated stills camera; a military-style medical kit; and a telescope.

Davis is a contractor to the US Government through his company Hyperion Protective Services LLC, registered in Arizona as providing ‘High risk threat protection’, the Bureau has learnt.  He is also a former US soldier.  Reports vary but it seems Davis ended his service in the U.S. Third Special Forces Group in 2003. The year beforehand, this unit was stationed in Kabul where it helped train the new Afghan Army.

The US has stated that Davis worked for its “administrative and technical staff” at the Lahore consulate.  The CIA, the U.S. military’s covert Joint Special Operations Command, and Xe (formerly Blackwater) are all known to operate inside Pakistan as part of the U.S. covert war – and there is much speculation that Davis may be an employee of one of these organisations.

One hundred and eighty lethal drone attacks have been recorded inside Pakistan since Barack Obama assumed the presidency on January 20th 2009.  This compares with 45 known strikes against alleged Al Qaeda and Taliban operatives during George W Bush’s eight years in power.

The strikes are known to be carried out by the CIA – but the U.S. government refuses publicly to confirm or deny its involvement. More than 2,000 people have been killed in the drone strikes – many of them, it’s believed, civilians.

The United States insists that Raymond Davis has diplomatic immunity, and must be released under the Geneva Protocols.  Pakistan disputes this claim, and Davis remains on remand until February 25th. in Pakistan suspended, as Obama seeks to free imprisoned ‘diplomat.’