Ahmad Niazi, framed by the FBI

The Greater Los Angeles Area office of the Council on American-Islamic Relations (CAIR-LA) said today that federal prosecutors have applied to dismiss all charges against a Muslim man whose case has been the center of a debate over the FBI`s use of agent provocateurs and informants in the American Muslim community.

Ahmad Niazi, a Tustin, Calif. man of Afghan origin, was arrested on immigration-related charges in 2009 after he helped report to law enforcement authorities an extremist who was seemingly planning terrorist attacks in the U.S. That extremist later turned out to be an FBI-paid agent provocateur, Craig Monteilh.

The FBI used Monteilh to spy on Southern California mosques and to entrap unsuspecting worshippers, according to Monteilh, who has since publicly disclosed the nature of his activities while in the FBI`s employ. 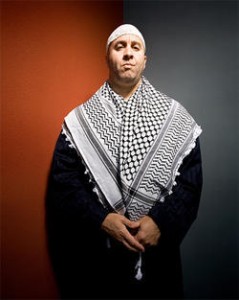 Because of the circumstances of Niazi`s arrest, CAIR-LA asked the U.S. Attorney General to investigate the FBI`s coercive and unlawful tactics in the arrest of Niazi, who has maintained that the charges against him are retaliation for his refusal to become an FBI informant.

Before his arrest, Niazi told CAIR representatives that during the FBI raid of a friend`s house, Special Agent Thomas J. Ropel III urged Niazi to “work” with the agency, saying that if Niazi refused, his life would be made a “living hell.”

“We commend Mr. Niazi and his family for standing up for his rights and the rights of all Americans in the face of the FBI`s heavy-handed tactics,” said CAIR-LA Executive Director Hussam Ayloush. “We are pleased that justice is being served and Mr. Niazi`s name is being cleared, and that he can now begin rebuilding his life. In order to regain its credibility, the government – and specifically the FBI – owes Mr. Niazi, his family and the Muslim community as a whole a sincere apology for ruining his reputation and livelihood by wrongly parading him as some sort of vicious terrorist.”

To bolster its case, the government had touted Niazi`s arrest as a victory against terrorism, raiding his home at gunpoint in front of his wife and children. At Niazi`s bail hearing in February 2009, Assistant U.S. Attorney Deirdre Eliot said, “In our eyes, this isn`t just an immigration case. In our view, the defendant is involved with the mujahadeen himself. Frankly, there is no amount of bail or equity in a home that can protect the citizens of this community.”

“I think the government realized that by pursuing charges against Mr. Niazi, the full extent of their outrageous conduct against him and the Muslim community would have been brought to full light,” said CAIR-LA Staff Attorney Ameena Qazi. “We renew our call to the Department of Justice to formally investigate the FBI`s intelligence-gathering techniques involving the American Muslim community and to enact specific measures to ensure that no other innocent American is unjustly targeted.”

In recent years, media reports have exposed the FBI`s regular use of paid informants and agent provocateurs in the Muslim community to initiate and encourage terrorism plots.

“We are very pleased with this positive development,” said Niazi`s Attorney Chase Scolnick with the Office of the Federal Public Defender. “From the very beginning I was overwhelmed by the support from the Muslim community. This result would not have been possible without them.”