The father of a woman who was killed in the Lockerbie bombing has demanded British and US governments "tell the truth" about who was behind the attack.

Libyan Abdelbaset al-Megrahi was jailed for life for the bombing. He died from cancer last year.

Dr Jim Swire lost his daughter Flora when Pan-Am flight 103 exploded, but he does not believe Megrahi was responsible.

He told the BBC: "We have the right to know everything the government knows about who it was that killed our families. 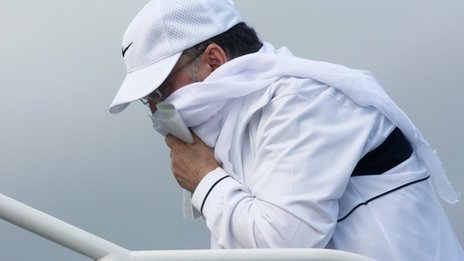 The family of Lockerbie bomber Abdelbaset Al-Megrahi has told the BBC they want to appeal against his conviction.

Megrahi died at his home in Tripoli in May last year from terminal cancer. He had always protested his innocence.

His brother Abdel-Hakim Al-Megrahi said the family "wanted the truth to be revealed".

He also said he was hopeful the Libyan government would help to fund the appeal.

In an interview with the BBC's Libya correspondent Rana Jawad, he said: "Yes, we want to appeal and we wish for the truth to be revealed and this is not just for our own benefit but also for the benefit of the families of the victims and for public opinion.

"We need to know who committed this horrible crime. But, as you know, we as a family cannot afford to pay for the appeals process.

"God-willing, the Libyan government will do this, but it has to be launched by the family first. As a family, we want to appeal; we want the Lockerbie files to reopen to know who is responsible."

He said the family were sure the Libyan government would held to fund the appeal because clearing his brother of committing the atrocity would also be "an acquittal for all Libyans and Libya".

"At the moment, it is perhaps difficult for the Libyan government to help us," he added. "But we hope, and we are very optimistic, that when the government stabilises it will help us because the Lockerbie problem is not an individual or family issue, but rather a Libya problem."

"My brother Abdelbaset could not have committed this heinous crime. He could never hurt any single person, let alone 271 innocent victims".

Abdel-Hakim Al-Megrahi insisted his brother had not been a Libyan intelligence officer, and claimed he had instead been a graduate in aviation engineering who had been employed by Libyan Airlines.

He added: "However, if he was used [as a scapegoat] for this problem [Lockerbie] - it's possible that he was used because the Gaddafi regime used to use any Libyan. In truth Libya was like a farm for Gaddafi and his sons and as Libyan nationals, we were like slaves - we couldn't say "no". We couldn't, this is the truth.

"But I assure you, and with reference to all the universities my brother studied in, be it in the US, Britain and Pakistan - he is a graduate of aviation engineering."

Megrahi was found guilty at a trial in 2001, and jailed for life. His co-accused Al-amin Khalifa Fimah was acquitted.

Dr Jim Swire, whose daughter Flora died when the Pan-Am flight 103 exploded over Lockerbie in 1988, said earlier this week that some families of those who died may seek a fresh appeal against Megrahi's conviction.

Mr Swire believes that Megrahi was wrongfully convicted of the atrocity.

But Scottish and US investigators stand by the evidence presented at his trial and are pursuing other potential suspects.

In a BBC interview on Monday, the Lord Advocate Frank Mulholland said "the conviction stands".

"We were ready to meet the arguments and challenges that Mr Megrahi and his lawyers were placing before the court," he said.

"If there's any further evidence, if anyone's got any concerns about it, they should make it known to the Scottish Criminal Cases Review Commission."

A spokesman for the Crown Office said:"This is a matter entirely for the Scottish Criminal Cases Review Commission and the High court of Justiciary. If the appeal is reinstated the Crown will defend the conviction."

The 25th anniversary of the bombing, which claimed 270 lives, will be marked in ceremonies in the US and the UK on Saturday.