Springtime for Franco and Pope Benedict - The Constantine Report
0 SHARES

" ... The Spanish Civil War served as a dress rehearsal for World War II, for the European fascist forces and the destruction of the Spanish Republic was their first major military victory. ... "

A friend sent me a troubling story from Spain. Pope Benedict, the former Cardinal Ratzinger, once a conservative theological brain-truster for Pope John Paul in his battles against liberation theology and progressive forces in the Roman Catholic Church, said in a speech that "in Spain, a strong aggressive lay mentality, an anti-clericalism and secularization has been born as we experienced in the 1930s."

Benedict was condemning the social legislation of the Socialist-led Spanish government, which has permitted abortion, liberalized divorce, and even legalized gay marriage.

He went on to say that Spain was a major center for a return to faith because Spain had played such a central role in "reviving" Christianity in past centuries. He didn't say what he meant specifically. Was it the Spanish Inquisition, Spanish colonialism's destruction of tens of millions of native peoples in the Western Hemisphere, the maintenance of a feudal social order that made Spain by the 19th century a weak backward nation, an example of what no one wanted to be?

In the 1920s and '30s Spain was at its core a feudal society without effective civil rights and liberties, a society in which the higher orders of the Catholic Church controlled vast amounts of land and other resources, making the Church a key component rather than a mere servant of the Spanish ruling class. 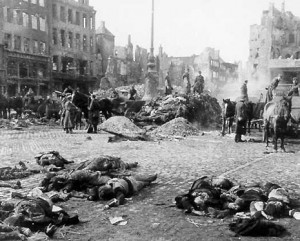 In its 1931 constitution the Spanish Republic established religious freedom, which had never existed in Spain, as well as the separation of church and state and an end to the Catholic Church's control of education, and most importantly, placed restrictions upon church property.

It also sought to institute land reforms which would have returned poor church-controlled lands to the poor.

The most reactionary sectors of Spanish capital then supported General Francisco Franco's coup against the government. When the coup faltered in the face of worker and peasant resistance, Nazi Germany and Fascist Italy entered the conflict to provide troops, weapons, planes and funds to Franco's forces.

In the bloody three-year civil war which followed, only the Soviet Union provided significant aid to the Spanish Republic. The global Catholic Church supported Franco's armies, not openly in defense of fascism, but on anti-Communist grounds, often countering the accounts of the atrocities committed by Franco's forces against workers and peasants with stories of attacks on monasteries and church-controlled feudal estates and the killing of clergy by the poor and other supporters of the Republic.

Following Franco's victory in 1939, a single party fascist state was established, property was returned to the upper classes and the church, and civil liberties and religious freedom were abolished (the latter for all non- Catholics, including Protestant Christians).

Hundreds of thousands of anti-fascist supporters of the Republic were murdered in the years which immediately followed Franco's victory, when Pope Benedict as a German teenager was a member of the Hitler Youth and then a draftee in the German Army.

Most commentators on the Pope maintain that he came from a passively anti-Nazi conservative Catholic family and was never an active supporter of the Hitler regime. But the crimes of German fascism and its central role in the establishment of Spanish fascism are still there. The German government, for example, provides Holocaust reparations to the victims and families of Spanish Republican fighters whom the Nazis captured in France and other countries and murdered systematically.

The Spanish Civil War served as a dress rehearsal for World War II, for the European fascist forces and the destruction of the Spanish Republic was their first major military victory. ...