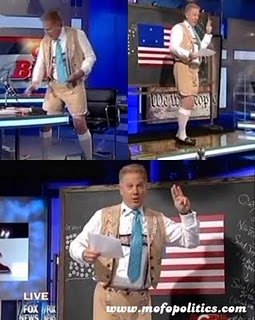 During the October 13 edition of his radio show, Glenn Beck likened the Obama administration's treatment of Fox News to Nazi persecution of Jews, telling other media outlets: "When they're done with Fox, and you decide to speak out on something," it would be like "[t]he old, 'first they came for the Jews, and I wasn't Jewish.' " Beck has a long history of invoking the Holocaust, the Nazi Party, and Adolf Hitler to smear the Obama administration, other progressive individuals and organizations, and the media; indeed, the Anti-Defamation League (ADL) previously criticized Beck for comparing Al Gore's efforts to raise awareness of global warming to the Holocaust.

Beck has repeatedly compared Obama to Hitler, claimed his policies are leading America toward Nazi Germany

"This is what Hitler did with the SS." Discussing Obama's call for a "civilian national security force" -- which was a reference to expanding the foreign service, AmeriCorps, and the Peace Corps -- Beck said on the August 27 edition of his Fox News program: "I'm finding this -- this is the hardest part to connect to. Because this is -- I mean, look, you know, David [Bellavia, former Army staff sergeant], what you just said is, you said, 'I'm not comparing' -- but you are. I mean, this is what Hitler did with the SS. He had his own people. He had the brownshirts and then the SS. This is what Saddam Hussein -- so -- but you are comparing that. And I -- I mean, I think America would have a really hard time getting their arms around that."

Beck: "I'm not comparing" Obama to Hitler, but asked his audience to "please read Mein Kampf" and learn from Germany's mistakes. On the August 12 broadcast of his radio show, discussing Obama's position on health care reform, Beck stated: "I am not comparing him to this, but please, read Mein Kampf for this reason. If you read it now, you see that Hitler told you what he was going to do. He told the Germans. It outsold the Bible. Germans read Mein Kampf, but what did they do? They didn't listen. 'Oh, he doesn't mean that.' 'Oh, he's just saying that to appeal to X, Y, Z.' All of the same lies we're telling to ourselves. 'No, that's crazy. Nobody would actually do that.' They buried their heads in the sand, and then it became too late. Please, America, take this man for what he says."

Beck cited Hitler to attack Obama, claim "[e]mpathy leads you to very bad decisions." During a discussion of Obama's statement that he would consider "empathy" in choosing a Supreme Court nominee, Beck drew a parallel to Hitler on his May 26 Fox News show: "Finally -- well, he wasn't the president. He was the chancellor, Hitler, decided that it was the only empathetic thing to do, is to put this child down and put him out of his suffering. It was the beginning of the T4, which led to genocide everywhere. It was the beginning of it. Empathy leads you to very bad decisions many times."

Beck told Newsmax: "I fear a Reichstag moment." On September 29, conservative news website Newsmax.com reported of its interview with Beck:

But his real worry is that many Washington elitists really don't like our form of government and want to see it abolished.

"I fear a Reichstag moment," he said, referring to the 1933 burning of Germany's parliament building in Berlin that the Nazis blamed on communists and Hitler used as an excuse to suspend constitutional liberties and consolidate power.

"God forbid, another 9/11. Something that will turn this machine on, and power will be seized and voices will be silenced."

Beck compared auto bailouts to the actions of German companies "in the early days of Adolf Hitler." While discussing the auto company bailouts on the April 1 edition of his Fox News program, after stating, "I am not saying that Barack Obama is a fascist," Beck said, "If I'm not mistaken, in the early days of Adolf Hitler, they were very happy to line up for help there as well. I mean, the companies were like, 'Hey, wait a minute. We can get, you know, we can get out of trouble here. They can help, et cetera, et cetera.' "

Beck compared TARP to "what happened to the lead-up with Hitler." On the April 21 edition of Fox Business' Money for Breakfast, Beck said of the Troubled Asset Relief Program, "This is not comparing these people to the people in Germany, but this is exactly what happened to the lead-up with Hitler. Hitler opened up the door and said, 'Hey, companies, I can help you.' They all ran through the door. And then in the end, they all saw, 'Uh-oh. I'm in bed with the devil.' They started to take their foot out, and Hitler said, 'Absolutely not. Sorry, gang. This is good for the country. We've got to do these things.' And it was too late."

ADL rebuked Beck for repeatedly smearing Gore as a Nazi

In 2007, ADL rebuked Beck's smears of Gore. On May 2, 2007, the ADL issued a press release condemning Beck's April 30, 2007, statement that "Al Gore's not going to be rounding up Jews and exterminating them. It is the same tactic, however. The goal is different. The goal is globalization. The goal is global carbon tax. The goal is the United Nations running the world." Abraham H. Foxman, ADL National Director and a Holocaust survivor, said of the remark, in part: "Glenn Beck's linkage of Hitler's plan to round up and exterminate Jews with Al Gore's efforts to raise awareness of global warming is outrageous, insensitive and deeply offensive."

Beck has also invoked the Holocaust to smear progressive organizations

Beck has also attacked progressive organizations as "brownshirts." Beck has repeatedly attacked the "brownshirts" at ACORN and "their henchmen" at the Service Employees International Union.

Beck has also invoked the Holocaust to criticize the media

Beck compared Fox News to Jews during Holocaust, other news organizations to silent bystanders. On the October 13 broadcast of his radio show, Beck compared Fox News to the Jews during the Holocaust, telling other media outlets, "When they're done with Fox, and you decide to speak out on something. The old, 'first they came for the Jews, and I wasn't Jewish.' " He went on to say, "When they're done with Fox and talk radio, do you really think they're going to leave you alone if you want to ask a tough question? ... If you believe that, you should open up a history book, because you've missed the point of many brutal dictators."

Beck not alone in invoking Nazis to smear progressives